Back To 100 Percent, Baron Browning Eyes Next Step At LB In 2019 After ‘Growing Experience’ 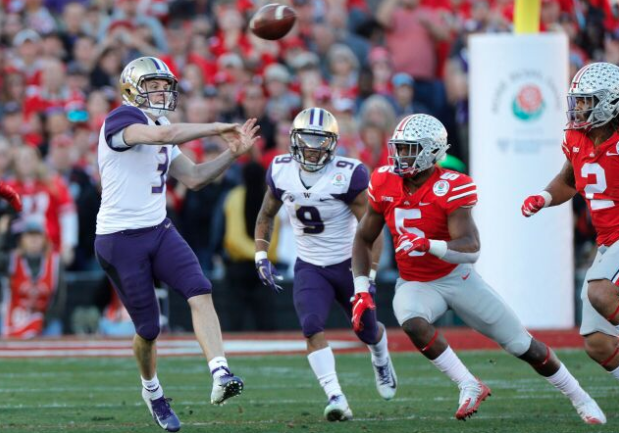 Out of the starting lineup but in the linebacker rotation, Baron Browning technically took the next step between his freshman and sophomore seasons but he wants more.

Since he started his Ohio State career as an early enrollee in January 2017, joining the Buckeyes after he was the 247Sports composite‘s No. 11 overall prospect and No. 1 outside linebacker in his class, the former five-star recruit from Kennedale, Texas, has been doing everything possible to get on the field.

Browning suffered a shoulder injury in 2017 spring camp, but he returned for the fall and played for 12 games with 14 tackles (one for loss) spread out across his time on defense and special teams.

Browning pushed for time in the 2018 campaign behind OSU’s trio of starters — Tuf Borland in the middle, plus Malik Harrison and Pete Werner on the outside — collecting 24 tackles (three for loss) over 12 games and missing two contests down the stretch due to injury.

The 6-3, 240-pounder made Ohio State’s trek to Michigan State for Nov. 10 but was ruled out after a hit to the head during practice late in the week turned out to be a concussion.

“I’m back to 100 percent,” Browning told BSB. “It was just kind of frustrating because I didn’t know whether or not I could play. It was a game-time decision of if I could play (at Michigan State). I traveled. Just when it came down to it, they decided not to play me.

“I’m feeling good. I just had a concussion. It happened pretty late in the week (of Michigan State). We played on that Saturday — maybe it happened that Wednesday or Thursday — but they weren’t for sure and they thought it just me having a headache because I get migraines sometimes, on and off.

“So they weren’t for sure and just wanted to wait and be sure. When it came down to it, I said I had the symptoms and so that’s why I didn’t play that game or the following game.”

After he watched as his Buckeyes beat the Spartans 26-6, Browning missed the subsequent week’s Nov. 17  trip entirely before OSU survived 52-51 at Maryland.

“I feel like it wasn’t going to take me long (to get back),” Browning said. “It was just more so it sucked being out and watching from home, my brothers play. I wished I could be there. Not being to do anything, that was probably the worst part.”

Able to take a step back and look at the bigger picture of his second year in Columbus as he eased back into Ohio State’s defense and special teams, Browning came back focusing on finishing strong.

“I think it was just like a growing experience, being able to learn from the older guys in our room like Tuf, Malik and just all the older guys,” Browning said. “I’m just self-reflecting on how I can get better going into the offseason and just growing from all of the mistakes I made and learning.”

With the Buckeyes’ addition of Al Washington from Michigan as linebackers coach Jan. 8, Browning enters his junior season looking to breakthrough — whether that comes at inside or outside linebacker.

“I feel like I can play inside and outside, but as far as preference, I like outside, of course,” Browning said. “But at the end of the day, it’s whatever they want me to play or need me to play. So that’s what I’m going to do.

“It’s just what I played, coming out of high school. More comfortable with it, but if they ask me to do something, I’ll do it — no hesitation, no questions asked.

“I’m definitely ready for (the next step). A big part of our program is competitive excellence, which is about stepping up when your number’s called or when somebody goes down. I think that’s what our program is all about.”