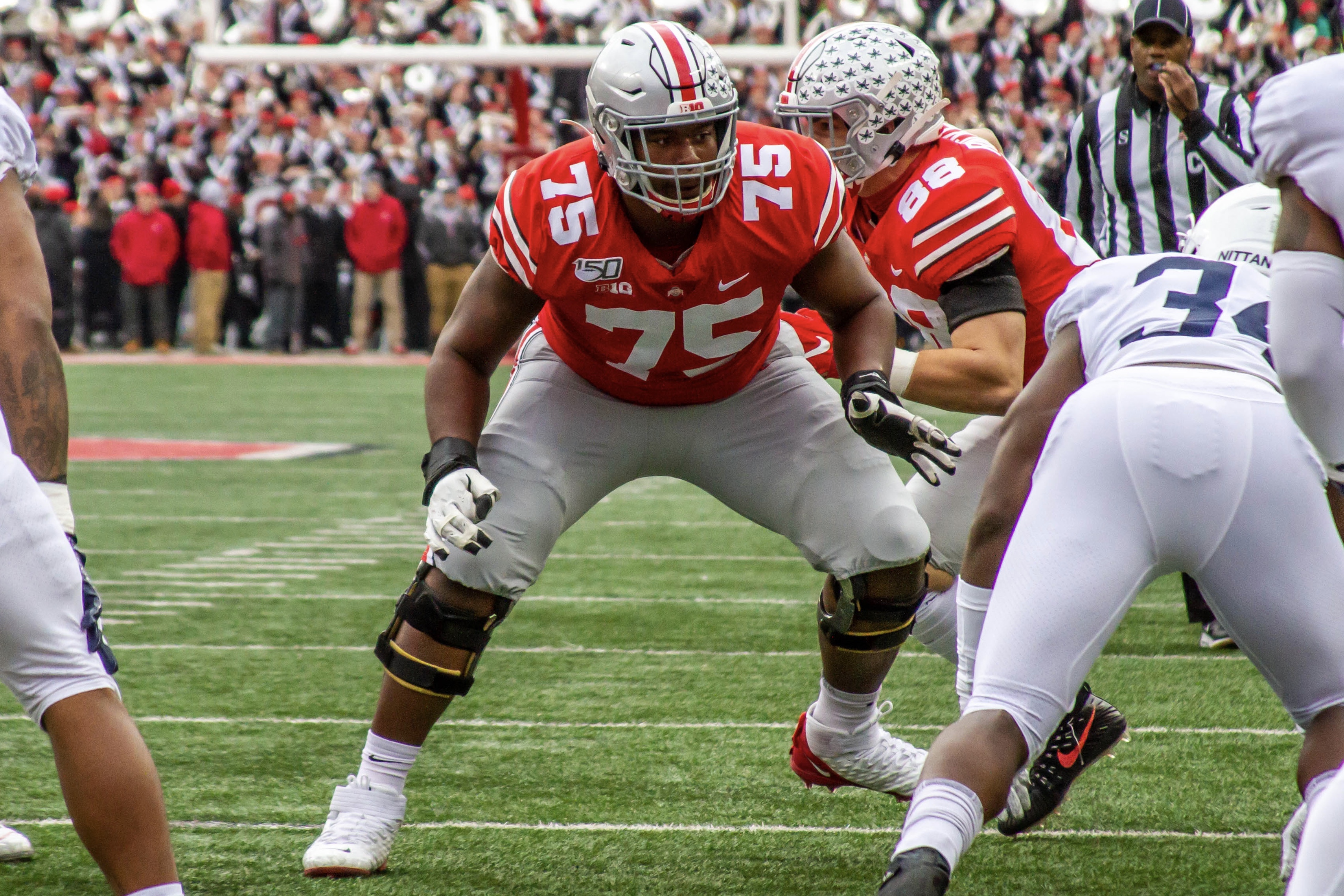 Former Ohio State offensive lineman Thayer Munford was selected by the Las Vegas Raiders with the No. 17 pick in the seventh round of the 2022 NFL Draft on Saturday. He was the No. 238 overall selection.

Munford entered last season with a forward-thinking mindset toward his professional career. Many scouts projected him as a second or third-round prospect in the 2021 draft. Still, he chose to come back for a super senior season with Ohio State and move to the interior offensive line, hoping he’d display a unique versatility to NFL franchises.

His goals worked — for the most part. According to Pro Football Focus (PFF), Munford was a middle-of-the-pack offensive guard in 2022, with a 73.7 overall grade across 704 snaps in his final season. He performed better in run blocking than in pass protection, receiving a 76.1 in the former and a 66.3 in the latter.

Munford had been one of the nation’s best offensive tackles the year before, but he bet on himself and his ability. While he didn’t shine in his new role, Munford’s decision offered Nicholas Petit-Frere an opportunity to return to his natural position, proving him to be a selfless leader who can be valuable in an NFL locker room.

His move to the interior wasn’t a wholesale change, either. Munford still recorded 149 snaps at left tackle this season when Ohio State required his services. He would often step into his old role during second-half blowouts or when right tackle Dawand Jones needed a break, causing Petit-Frere to kick back to his former position.

Munford is a former-four star prospect from Cincinnati Massillon Washington High School and was the No. 28 offensive tackle nationally and No. 14 player in Ohio according to 247Sports’ composite rankings.

When Munford arrived in Columbus in 2017, he spent his first season developing in the weight room and packing on pounds. Munford broke into the starting lineup as a redshirt freshman and appeared in all 12 regular-season games before an injury kept him from competing in the Rose Bowl win over Washington. He was named an honorable mention All-Big Ten member by the coaches and media for his efforts.

In 2019, Munford led an Ohio State offensive line that paved the way for running back J.K. Dobbins’ record-breaking 2,000-plus yard season. He started in all 13 of the Buckeyes’ games that season and was named to the All-Big Ten second team by the coaches and media.

Munford’s 2020 season was his best as a Buckeye. PFF ranked him as the No. 1 overall tackle with a 91.8 grade when factoring in his total performance. Ohio State benefitted from Munford’s prowess that season, too, finishing with the No. 7-ranked offense in the nation in yards per game (519.4) and rushing yards per game (256.8).

The Draft Network’s Kyle Crabbs believes Munford’s versatility will benefit the Raiders and can make him a desirable option to play immediately at the professional level.

“Munford will appeal to NFL teams for his stature and versatility as a player,” Crabbs said. “He’s got the strapping frame to be an NFL tackle if need be, but his most recent play has cast some doubt on a projection there. Munford now, with a successful career at Ohio State behind him, will be an option for NFL teams who run a lot of inside zone concepts as the Buckeyes have offered him as both a tackle and guard.”

Crabbs acknowledges that Munford took a step backward last season, claiming the Ohio State prospect might have hurt his draft stock rather than improve it. Still, Crabbs said Munford’s flexibility and willingness to move around the offensive line is admirable nonetheless.

“I’m hoping to see a more dynamic and fluid version of Munford at the pro level, particularly if he’s left inside for his NFL home,” Crabbs said. “I thought 2020 was Munford’s best campaign with the Buckeyes. He took a massive leap forward that season relative to his 2019 play, but 2021 saw a bit of a regression back to his norms across the full depth of his career in Columbus. He’ll be a developmental offensive guard at the next level.”

Regardless of where Munford plays at the next level, he’ll look to make an immediate impact. His rookie season might not feature much in-game action, but he can develop much like he did during his freshman year in Columbus. The Raiders can afford to offer him that time, with plenty of prospects entering the fold before next season.