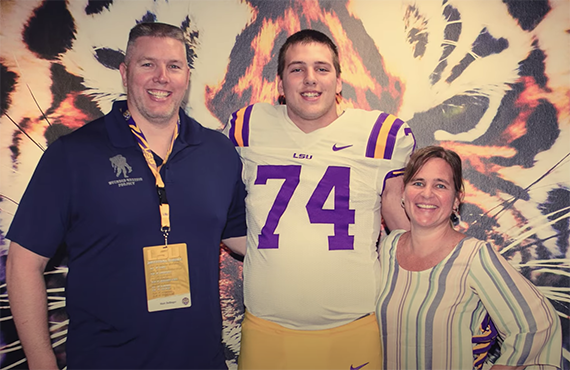 The decision comes as no surprise, as the Tigers held 100 percent of the 247Sports crystal ball predictions for the 6-5, 280-pound Dellinger, who is considered the 12th-best offensive tackle and No. 79 prospect overall in the class of 2021. The Buckeyes, on the other hand, never really made him a priority and were more of a hat on the table in his recruitment than anything else.

Dellinger landed an offer from Ohio State following a one-day camp in June 2018, where he and his teammate, four-star offensive guard Rocco Spindler, worked out with offensive line coach Greg Studrawa. He then returned for an unofficial visit for the Buckeyes’ 38-7 win over Wisconsin in October 2019.

Ohio State already holds one commitment at the offensive tackle position for the class of 2021 from Richfield (Ohio) Revere four-star offensive tackle Ben Christman, and hopes to add another this cycle. The Buckeyes felt good about their chances with Bradenton (Fla.) IMG Academy five-star J.C. Latham until he pledged his services to Alabama earlier this month, and have since upped their pursuit of Fairfax (Va.) Robinson Secondary five-star offensive tackle Tristan Leigh with Latham off the board.

Dellinger’s decision does not impact the Buckeyes’ pursuit of the aforementioned Spindler, meanwhile. He and Lexington (Ky.) Frederick Douglas four-star Jager Burton are among the offensive guards fighting for the one offensive guard spot remaining in the class alongside five-star commit Donovan Jackson.