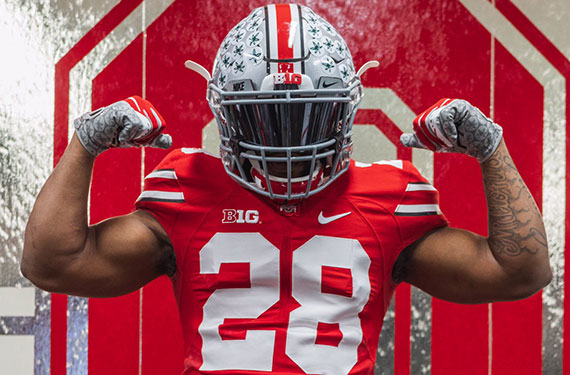 Just hours after his unofficial visit for the 28-17 win over Penn State concluded, Cincinnati Winton Woods three-star running back Miyan Williams flipped his pledge from Iowa State to Ohio State.

The 5-10, 210-pound Williams is considered the 43rd-best running back and No. 618 prospect overall in the class of 2020, as he’s rushed for 5,823 yards and 68 touchdowns in his three-year varsity career with the Warriors. He was the 2018 Ohio Mr. Football runner-up and was recently named the 2019 Ohio Prep Sportswriters Association Southwest District Division II Offensive Player of the Year.

Williams has been committed to the Cyclones since July, but an offer from the Buckeyes on Sept. 21 turned the tide in his recruitment. From there, it was considered only a matter of time before he visited Ohio State and flipped his pledge.

Williams becomes 25th member but first running back in Ohio State’s 2020 recruiting class. Running backs coach Tony Alford hopes to bring on one more running back this cycle, though, with Dalton, Ga., four-star and Georgia Tech commit Jahmyr Gibbs being his top priority at this point in time.