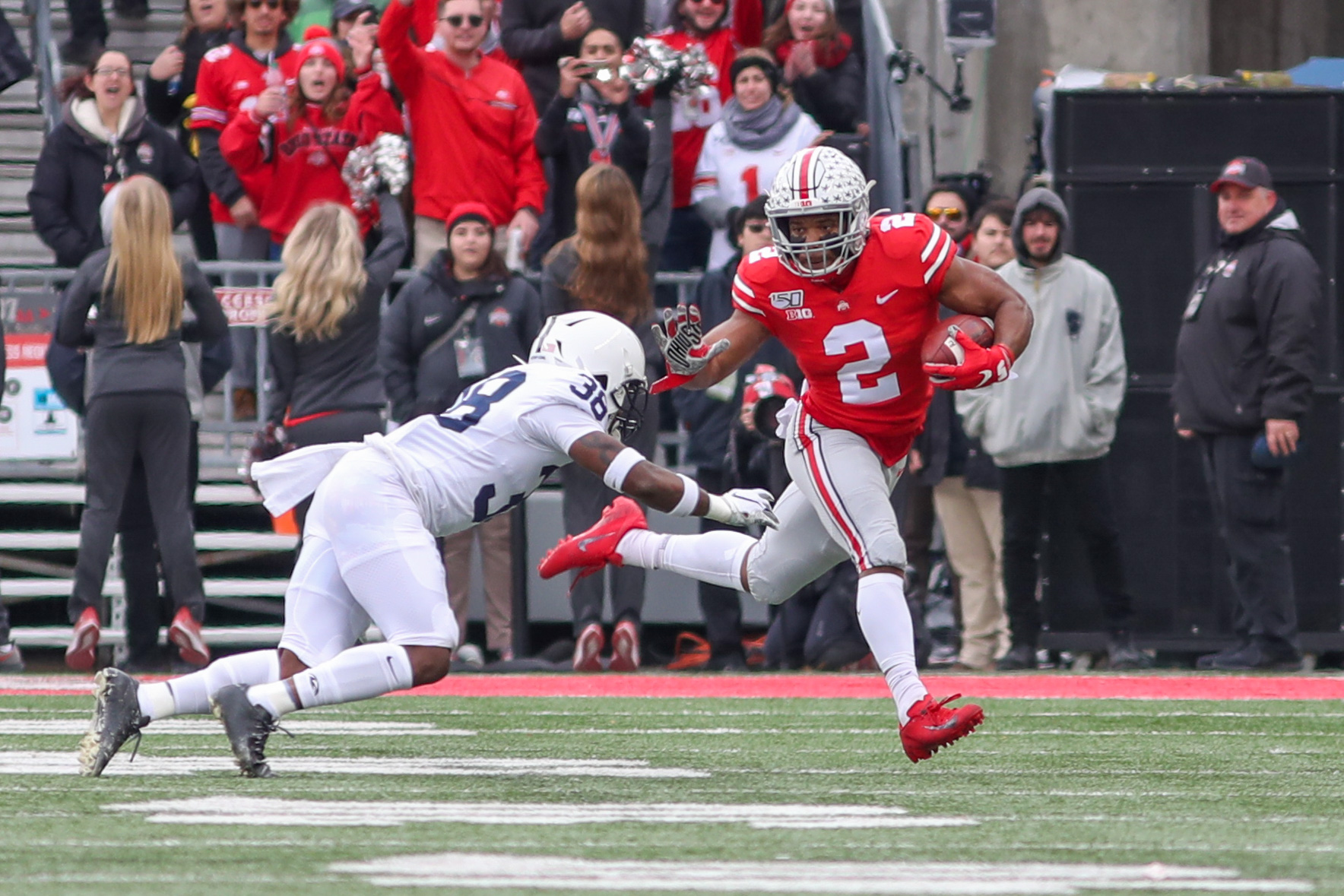 The Buckeye Sports Bulletin staff distributed Buckeye Leaves to the deserving players who stood out at Ohio Stadium on Nov. 23.

It wasn’t a perfect game, but junior running back J.K. Dobbins against dominated on the ground, and was one of the main reasons for Ohio State’s success on the offensive side of the ball.

Dobbins finished the game with a season-high 36 carries for 157 yards and two touchdowns, while also hauling in one catch for 11 yards. He also lost a fumble which ended up becoming a touchdown for Penn State, making it a very impressive performance that will go down with a flaw.

But regardless, Dobbins set the tone time and time again in the rushing game for Ohio State, and was able to more than double the amount of rushing yards Penn State had given up on average per game (75.9 yards) heading into the matchup.

Against the No. 4 rush defense in the country, Dobbins found success on multiple occasions, and was a major factor in the Ohio State victory.

Chase Young deserves a Buckeye Leaf for his dominant performance against the Nittany Lions. The junior co-captain returned from a two-game suspension with a vengeance.

His relentless pursuit set the tone for the Buckeyes, helping lead them to an 11-point victory against the talented Nittany Lions.

Fifth-year senior linebacker Justin Hilliard has fought through his fair share of adversity at Ohio State, having missed most of the 2015 and 2016 seasons with separate bicep injuries and then suffering an Achilles injury this last spring.

Many felt Hilliard’s career might be over at that point, yet he’s worked his way back from the latest injury to become a key contributor for the Buckeyes this season.

With Penn State trailing 28-17 and driving deep in Ohio State territory, Hilliard made arguably the biggest play of his career when he stepped in front of Will Levis’ pass to give the Buckeyes the ball back at their own 20-yard line and halt the Nittany Lions’ momentum.

I’m not sure there’s another player in college football who deserves that moment more than Hilliard. And to think he might even get one more year with the Buckeyes if the NCAA approves his waiver for a sixth season.

Chris Olave may have only reeled in two receptions for 44 yards in Ohio State’s 28-17 win over Penn State, but the stats don’t accurately portray how important he was.

Much of that importance came not from Olave’s production, but from the level of attention he demands from a defense. Penn State was dedicating a cornerback and a safety to him on every play, freeing up space for other receivers. On top of that, Olave was open on several occasions but couldn’t quite pull in a catch on under thrown balls, through no fault of his own.

With that said, the catches he did pull in are certainly worth mentioning. He had a pretty 16-yard sideline reception in the first half, and his 28-yard touchdown in the fourth quarter served as the moment that seemed to put the Nittany Lions away.

Ohio State’s passing attack certainly wasn’t anything spectacular against Penn State, but it was enough to get the win, due in large part to Olave.