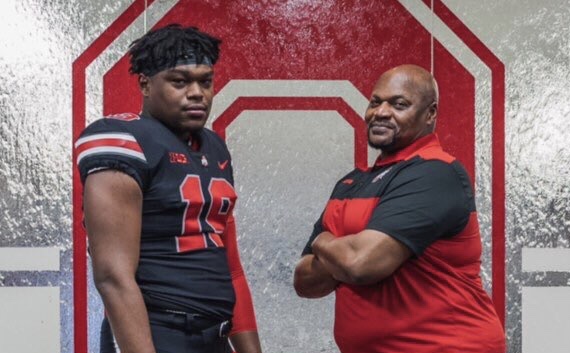 Ohio State secured a commitment from the state’s top-rated defensive linemen on Saturday evening when Cincinnati Princeton four-star Darrion Henry pledged his services to the Buckeyes.

The 6-5, 275-pound Henry is considered the 11th-best defensive tackle and No. 121 prospect overall in the class of 2020, as he recorded a team-high 61 tackles, 8.5 sacks, three forced fumbles and two fumble recoveries for the Vikings last season. He picked Ohio State over finalists Cincinnati, Georgia, Kentucky, LSU and Tennessee.

Henry landed an offer from defensive line coach Larry Johnson during Junior Day in February 2018, and most assumed it was only a matter of time before he committed to the Buckeyes. Numerous trips to Columbus for games, practices and camps only furthered that train of thought, but Henry ultimately took his time with the process and made multiple visits with each of his finalists.

Much has been said over the last year about a potential package deal featuring Henry and two of his close friends and teammates, five-star offensive tackle Paris Johnson Jr. and four-star linebacker Jaheim Thomas. And while Johnson has been committed to Ohio State since last summer, Henry and Thomas strongly resisted that notion throughout the process — the latter leaving the Buckeyes off his top schools list last month.

Simply put, Henry and Thomas wanted to find the best landing spot for themselves rather than play together at the next level. And for the former, it just so happens to be the same school Johnson picked, too.

Henry becomes the 15th member of Ohio State’s 2020 recruiting class, joining four-star linebacker Cody Simon and four-star cornerbacks Clark Phillips III and Lejond Cavazos on the defensive side of the ball. His pledge bumps the Buckeyes up to fourth in the 247Sports Composite team rankings, while Simon’s commitment earlier in the day helped Ohio State pass Michigan for the top-rated class in the Big Ten — but with five fewer commits.