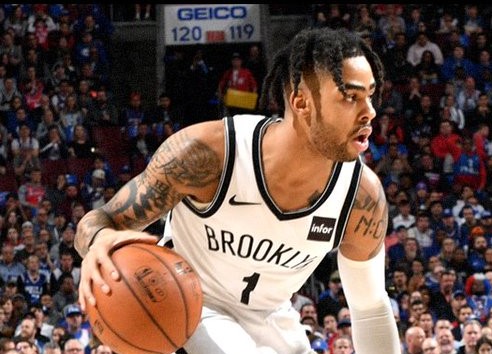 Instead of losing superstar forward Kevin Durant for nothing, the five-time reigning Western Conference champion Warriors will add All-Star guard D’Angelo Russell in a sign and trade.

Golden State and Brooklyn have agreed on a sign-and-trade, sending D’Angelo Russell to the Warriors on a four-year, $117M maximum contract, league sources tell ESPN.

While Durant is teaming up with three-time All-NBA center and long-time friend DeAndre Jordan and two-time All-NBA point guard Kyrie Irving in Brooklyn, the Warriors did not want to walk away empty handed.

The Golden State front office worked with Brooklyn to acquire Russell, whom the Nets could no longer afford with the addition of its All-NBA trio.

The Warriors will reportedly add Russell and fellow guards Treveon Graham and Shabazz Napier, sending Durant, who may miss most or all of the 2019-20 season recovering from surgery on a ruptured Achilles, to Brooklyn.

Given that two-time MVP point guard Steph Curry is already on a max contract and two-time All-NBA shooting guard Klay Thompson signed a five-year, $190 million contract, Golden State could not bring in Russell on the four-year, $117 million contract he agreed to without clearing cap space.

In order to free up enough space to bring in Russell, the Warriors traded former NBA Finals MVP Andre Iguodala to the Grizzlies along with future draft picks.

The addition of Russell on a max contract leaves the Warriors without a lot of cap space to work with, potentially signaling the end of the Golden State tenure of two-time All-NBA center DeMarcus Cousins, forwards Kevon Looney and Jordan Bell, and guards Shaun Livingston and Quinn Cook.

However, the Warriors brought in one of the league’s most coveted young talents in former Buckeye D’Angelo Russell, who was a consensus first-team All-American as a freshman at Ohio State.

Emerging as an Eastern Conference All-Star in 2018-19, Russell led the Nets to the playoffs, averaging 21.1 points, 7.0 assists and 3.9 rebounds per game. Improving his shooting range in his fourth NBA season, Russell shot career highs from the field (43.4 percent) and from three-point distance (36.9 percent).

During his one season in Columbus, Russell averaged 22.7 points, 5.9 assists and 6.7 rebounds per contest, shooting 44.9 percent from the field and 41.1 percent from beyond the arc.

The Warriors will presumably rely heavily on Russell, with Thompson likely to miss most or all of the season while recovering from a torn ACL. However, some have speculated the Warriors might look to move Russell in a trade.

With a nucleus of Curry, Thompson, Russell and two-time All-NBA forward Draymond Green, the Warriors have put themselves in a position to make a run at their sixth straight Western Conference title.