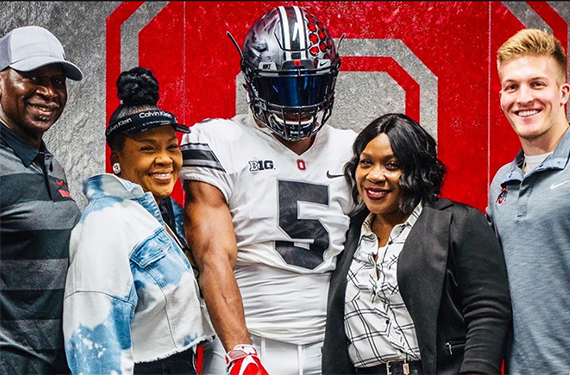 Two of Ohio State’s top remaining targets — Tucson (Ariz.) Salpointe Catholic five-star running back Bijan Robinson and four-star safety Lathan Ransom — have set announcement dates. Ransom will post a video to Twitter account at 3 p.m. on July 16, while Robinson will reportedly reveal his college of choice through his Instagram account on Aug. 2.

The Buckeyes already hold a commitment from one of the top-rated prospects in the state of Arizona in Scottsdale Chaparral four-star quarterback Jack Miller, who has been actively recruiting Ransom and Robinson to join him in Columbus. The three spent a considerable amount of time together at The Opening Finals in Frisco, Texas, earlier this month.

Both prospects took official visits in June and have narrowed down their decisions to either Ohio State or Texas. The Buckeyes are the overwhelming favorite in the respective recruitments, however, holding 94 percent of the 247Sports Crystal Ball predictions for Ransom and 77 percent for Robinson.

Commitments from both prospects would push Ohio State into second place in the 247Sports team rankings, trailing only top-rated Clemson. Couple that with a potential pledge from Florida four-star all-purpose back Jaylan Knighton on July 30 and the Buckeyes could pass the Tigers, provided they don’t land another prospect in the meantime.