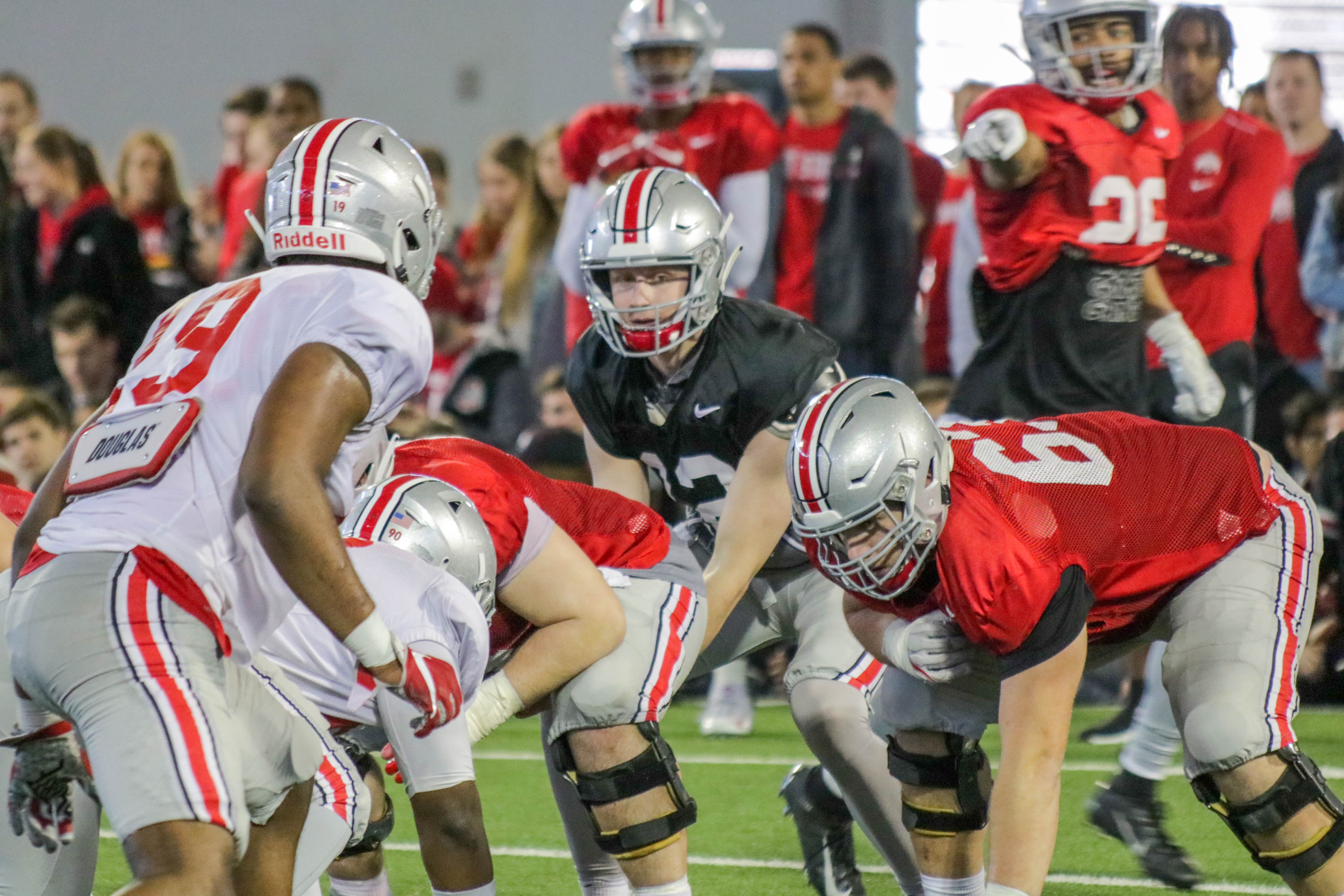 When the Ohio State spring game starts Saturday at noon inside Ohio Stadium, sophomore Justin Fields and redshirt freshman Matthew Baldwin get one more shot to polish their body of work before they resume action in fall camp.

In the Buckeyes’ annual scrimmage, first-year head coach Ryan Day said Wednesday after the 13th practice of spring camp that the team would operate under “thud” contact across each 10-minute quarter, including a running clock for the second half.

But as the “good on good” rosters map out an approach with the first-team units against each other before giving way to the second teams, the makeshift structure ultimately gives Fields and Baldwin each an opportunity for operating the offense in a game-like atmosphere.

“The coaches are off the field, so now it’s their team,” Day said. “What does their leadership look like? How do they manage the game? How does it look like, managing the plays, managing the drive, understanding situations — down and distance, field position, things like that. Really, really important — leadership on the field, energy level, body demeanor. All those things we’ll be looking at. We’ll see the ability to work a team down the field and score touchdowns.”

OSU’s last scrimmage came April 5 during its 11th practice, which showed Fields dominating the first-team reps before Baldwin stepped in and ran the final couple of drives from midfield.

While fifth-year senior Chris Chugunov rounds out the scholarship depth and is primed for the bulk of Ohio State’s second-team snaps, Fields (6-3, 223) has caught on quickly since he announced his transfer Jan. 4 and competed with Baldwin (6-3, 215) upon spring camp’s start March 6.

Three months later, from winter workouts to spring practices, Fields has left a lasting impression on Day since he got his NCAA clearance for immediately eligibility in the fall.

“In the recruiting process, had a chance to recruit him, had a chance to watch him practice in the spring and watch his film … but not a lot of 1-on-1 time,” Day said of Fields, who joined the Buckeyes after he spent his freshman season at Georgia in 2018 and enrolled for the spring semester Jan. 7. “But seeing the way he works, day in and day out, very impressed with his ability to retain information, his football IQ. You forget, for such a mature kid, he hasn’t played much football at all. … His physical traits are tremendous, just in terms of his size, his ability to move, he’s got a strong arm, but then also he’s got good intangibles. He understands what’s going on, he sees defenses. Like I said, he has good football IQ.”

On the other hand, Day said that Baldwin entered spring camp “in the same boat” as Fields after he sat the fall out and recovered from a torn ACL.

Fifteen months since he had surgery on his right knee in January 2018, though, Baldwin has built confidence — physically and mentally — while impressing Day along the way.

“Bowl practice was big for him,” Day said of Baldwin, referencing OSU’s stretch in December from Columbus to Los Angeles before its Jan. 1 Rose Bowl appearance culminated with a 28-23 win over Washington. “He was able to get out there and start to get his feet underneath him. I think he’s building his confidence every day and I think that the best practices that he’s had are probably the last four or five.”

Day made his stance clear on the team’s general position battles when he said competition would continue into fall camp.

But will the quarterbacks have an answer by the end of the spring?

“Just really impressed with the way (Baldwin) goes to work every day,” Day said. “And that’s not about, ‘What happens if I don’t win the job? Am I going to go move to somewhere else?’ No. He’s a Buckeye and that’s really important. That’s important to our team. And he’s getting better. He’s throwing the ball really well, improving in other areas, being challenged by his teammates. So it’s been a great spring for him.”