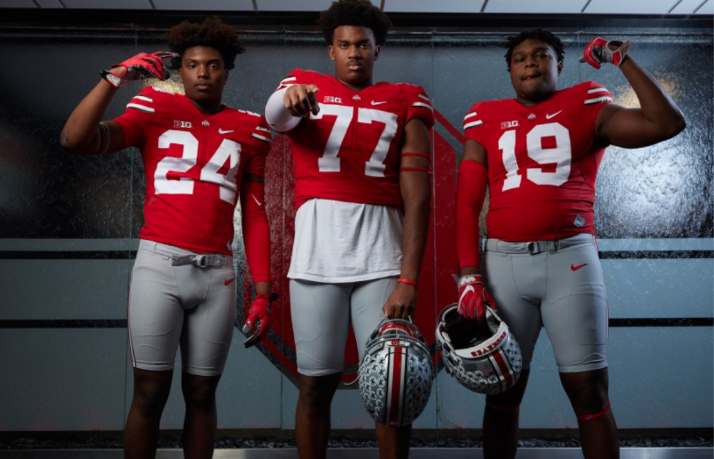 National Signing Day is right around the corner Wednesday as Ohio State caps its 2019 class with several targets left along the offensive line, but the first weekend in February set the stage for the Buckeyes’ recruiting efforts across the next two cycles.

OSU hosted a longtime commitment, top targets and priority prospects Saturday when underclassmen across the classes of 2020 and 2021 came to Columbus for unofficial visits. Among the recruits on campus, BSB sorts through the notable names and where things stand.

As the 247Sports composite’s No. 46 overall prospect, No. 4 strong-side defensive end and No. 2 player in Ohio, Henry has been atop the Buckeyes’ board since he emerged from his Feb. 19 visit with an offer. Henry holds 25 offers and has taken an abundance of trips over the past year with several to OSU — most recently heading to Notre Dame (Dec. 15), Tennessee (Jan. 26) and Purdue (Jan. 27).

Ohio State head coach Ryan Day and defensive line coach Larry Johnson stopped Jan. 11 by Princeton to inquire about Henry and Thomas. Henry has been in possession of an offer from the Buckeyes for nearly a full year, but Thomas — with 25 offers — has had to wait on OSU. Ranked the 247Sports composite’s No. 255 overall prospect, No. 17 outside linebacker and No. 4 player in Ohio, Thomas took trips to Notre Dame (Dec. 15), Tennessee (Jan. 26) and Purdue (Jan. 27).

Committed to Ohio State since June 28, Johnson leads the Buckeyes’ group for the next cycle as the 247Sports composite’s No. 6 overall prospect, No. 1 offensive tackle and No. 1 player in Ohio. Since former Buckeyes head coach Urban Meyer retired Jan. 2, Johnson’s status has remained unchanged despite visits elsewhere — Notre Dame (Dec. 15), Tennessee (Jan. 26) and Georgia Tech (Jan. 27) — during Day’s elevation at OSU.

Buckeye nation what do you think?🤔 #GoBucks pic.twitter.com/pkZbrp92d6

While the Buckeyes offered McCord (15 offers) and Harrison (eight offers), Trotter might be next after visiting campus with the two.

Among his 14 offers early on, including Notre Dame (June 17) and Michigan (Nov. 28), Styles picked up an offer Dec. 7 from the Buckeyes and had previously visited Nov. 24. He is the son of former OSU linebacker Lorenzo Styles (1992-94).

Nine days after Ohio State extended an offer Jan. 24 to Blake Corum, the 2020 four-star running back from Baltimore St. Frances made it out to Columbus.

From up north, Donovan Edwards drove down to Columbus for an Ohio State visit after Day and co-defensive coordinator Greg Mattison stopped Jan. 17 by West Bloomfield, Mich., for the 2021 running back and 2020 four-star safety target Makari Paige (6-3, 182).

The 5-11, 190-pound Edwards picked up an offer Sept. 22 during his game-day trip to Ohio Stadium for the Buckeyes’ 49-6 victory against Tulane.

Another product of West Bloomfield also made the trip to Ohio’s capital in 2021 defensive back prospect Maxwell Hairston (6-0), who visited Michigan (Jan. 26) beforehand.

Had a great time at THE Ohio State University! #GoBuckeyes 🌰⭕️ pic.twitter.com/FGoFfvrFJh