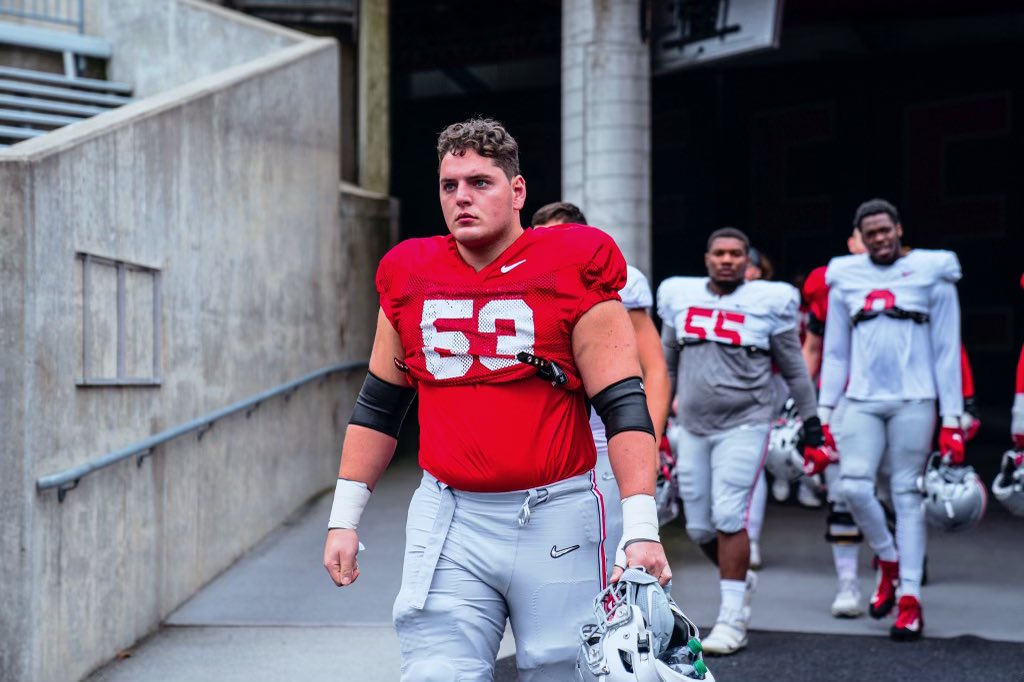 Luke Wypler is a Jersey boy.  He likes pizza, bagels and Bruce Springsteen.

The redshirt freshman center will make his return home when the Buckeyes travel to Piscataway, New Jersey, to face Big Ten opponent Rutgers.

Wypler said he and his other teammates from the Garden State — like quarterback Kyle McCord, safety Ronnie Hickman and linebacker Cody Simon — bring a part of the state’s culture of blue-collar toughness to the Ohio State locker room.

“I think coming from that area, coming from Jersey, everyone kind of knows the Jersey rugged, tough guys,” Wypler said. “I think that mold, we try to bring that here, to our locker room here. We try to pass it along to some of our teammates.”

Wypler, a Montvale, New Jersey native, grew up an hour away from Rutgers’ SHI Stadium and went to many Scarlet Knights football games in his youth.

“Growing up, I was a decent Rutgers fan. My uncle had season tickets growing up,” Wypler said. “I went to quite a few games, but to be honest, I wasn’t a huge, die-hard fan.”

Wypler’s ties to the Scarlet Knights don’t end his childhood, though, and neither do his experiences in SHI Stadium. The 6-foot-3, 300-pound lineman became a highly touted recruit for former Rutgers head coach Chris Ash in high school. The former St. Joseph Regional four-star said he considered committing to the school but ultimately decided to join the Buckeyes.

After playing one game as a true freshman, Wypler will start in his fifth career game for the Buckeyes on Saturday. He was thrust into a starting role the last four weeks as Harry Miller was inactive for what head coach Ryan Day called “health issues.” Miller, the projected starter heading into this season, battled Wypler throughout the spring, summer and fall camps.

Wypler said he expects some nerves to creep in while playing on Saturday. Still, he’s learned to manage his anxieties in Ohio State’s first four games.

“I think with anything, there will be a little bit of nerves,” Wyper said. “I’m feeling more comfortable in what I’m doing.”

Wypler is also working to find his voice on the Buckeye offense. He wants to be a leader, but he wants to learn what kind of leadership his teammates seek from him.

“It’s more of learning how my voice needs to be used,” Wypler said. “I just think it was a learning curve of what is expected of me throughout our team and in the locker room and in the huddle.”

Wypler will play in front of 200 family members and friends in Piscataway. He is excited to play for them, and he will cherish the opportunity to play in his home state again.

“It’s really special,” Wypler said. “A lot of my friends are going to be there, so it’s going to be really fun just playing in front of them.”