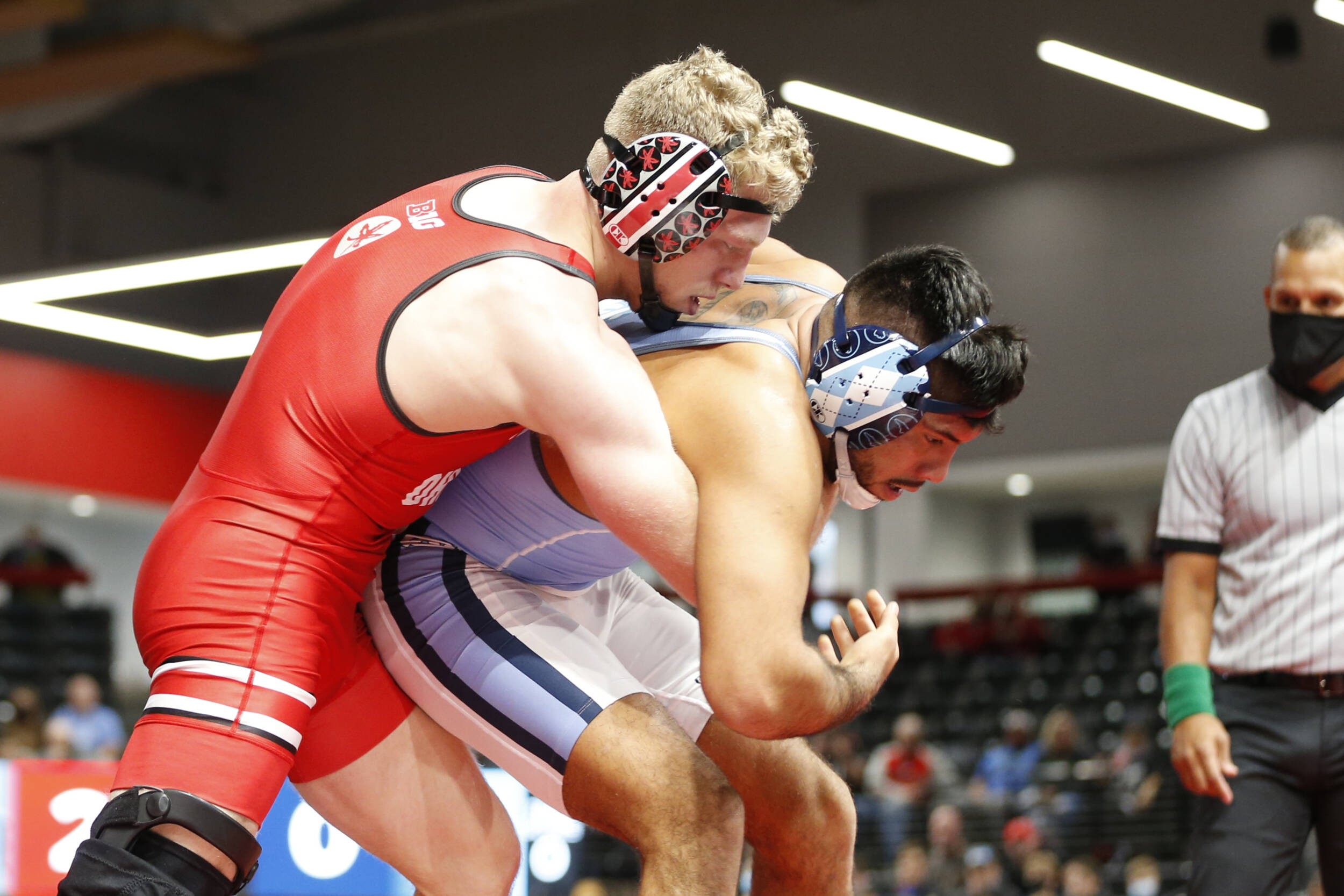 For total takeaways from Ohio State’s victory over North Carolina and complete coverage of the wrestling team from beat reporter Chase Brown, call Buckeye Sports Bulletin at 614-486-2202 to subscribe to the print edition of BSB.

Ohio State wrestling opened its regular season with a dual against North Carolina before 2,875 fans in the Covelli Center Sunday afternoon. The No. 10 Buckeyes won 7-of-10 matches to defeat the No. 12 Tar Heels 23-12.

Carson Kharchla is as advertised

Redshirt sophomore Carson Kharchla, the No. 10 wrestler at 165 pounds, started the afternoon for the Buckeyes, and fans received their first real taste of having him in the starting lineup.

The top recruit from Olentangy Liberty High School in Powell, Ohio, missed last year after he suffered a torn ACL in preseason training. Still, when the opening whistle blew, he showed why Tom Ryan and his staff were so eager to get the local star on the roster.

Kharchla secured a takedown in the first 15 seconds of the match and never looked back. He followed up the two-point score with three more while also locking up a riding time bonus. Kharchla’s first dual-meet match ended in a 10-2 decision.

“I thought I did well controlling myself in the atmosphere and being able to zone out and focus on my wrestling,” Kharchla said after the match. “My biggest thing is I just want to wrestle, action and moves. I don’t want people to be bored watching my matches.”

On Sunday, Jordan Decatur wrestled at 141 pounds for the first time in his Ohio State career. He looked like he had the late-match energy often missing from his duals in the last two seasons at 133.

Unfortunately, Decatur didn’t showcase enough aggression on offense against No. 14 Kizhan Clarke. Against a wrestler of Clarke’s caliber, he needed to keep a consistent scoring pace.

Ryan said Decatur needs to find a self-discovered belief to be aggressive in big matches. The head coach claims that the only way to improve in this wrestling area is to get on the mat as much as possible.

“He needs to understand the deep value in practicing at an elite level,” Ryan said. “It’s all about belief systems and closing the gap between belief and reality. Aggression develops faster than passivity, but he’s got to believe.”

Sammy Sasso Needs To Stop Playing With His Food

When I was little, my dad would empty a can of peas and put them into a microwaveable bowl. He would then “nuke” them for a few minutes before taking them out, adding a big scoop of butter, and scooping the green pods onto a plate.

While I didn’t love peas at first, I tolerated the foul stench and the mushy texture when he put them in front of me. But then he made them a lot. With each spoonful, I became less interested. I would push the peas around with my utensils until my dad said I could clear my plate.

Why am I telling you this?

Sammy Sasso needs to stop playing with his food, waiting for an opponent to let him off the hook. He is the best collegiate wrestler at 149 pounds, but you wouldn’t know it given his always-close decisions at Ohio State.

Sasso is a black shirt, an All-American, and a national runner-up from a year ago. These distinguished honors are valuable, but if he wants to be remembered as a legend in the Ohio State wrestling ranks, he will need to start putting matches away with more comfortability.

The Nazareth, Penn., native had the biggest match of the afternoon, facing All-American and No. 5 149-pound wrestler Zach Sherman. Sherman gave him all he could handle; however, both his points came from Sasso’s technical violations rather than his offense.

Sasso was dinged once for an illegal cutback and then locked hands, bringing the match much closer than it should have been. The redshirt junior ended up with a 4-3 decision against a quality opponent, but there’s much to be desired from the title contender this rest of this season.