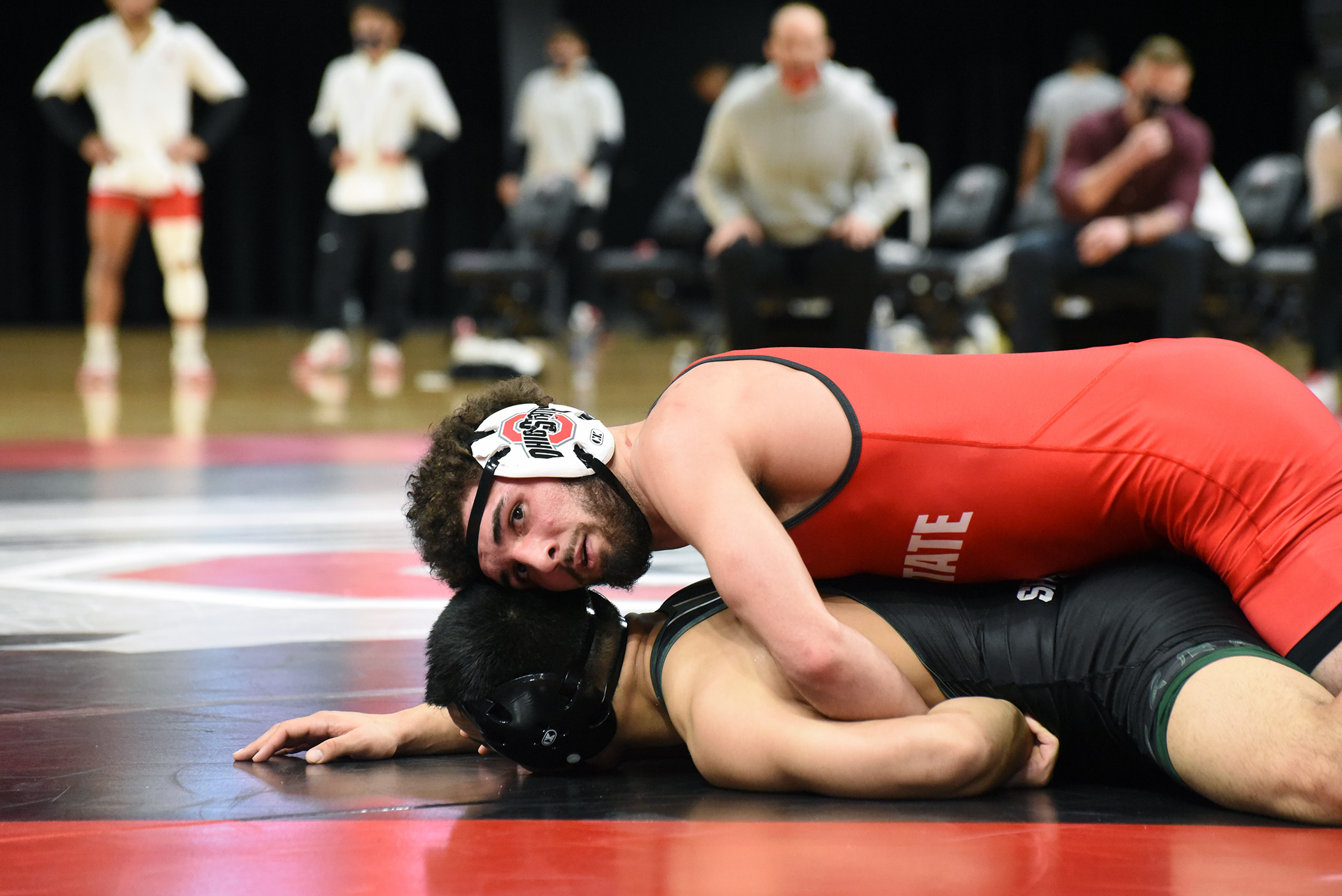 For more wrestling coverage, be sure to subscribe to the Buckeye Sports Bulletin print edition by calling 614-486-2202.

Although Ohio State is losing 157-pound starter Elijah Cleary and has plenty of questions at 133 pounds and 157 pounds, along with a bit of a traffic jam in the middleweights, the Buckeyes still have the look of a Big Ten contender entering the fall 2021 season if improvements that showed in the spring carry through. The lineup is still fluid, especially with the transfer portal, which head coach Tom Ryan says the Buckeyes are looking at aggressively in both problem spots at 133 and 157.

However, a fairly educated guess can be made at most positions and it seems as good a time as any to take a look at what the Ohio State duals lineup could look like when the next season arrives.

125 Pounds ­– Malik Heinselman was a fringe pick entering the 2021 spring season. He had filled the job primarily by default during his first two seasons as a starter but had proved very little about his ability to keep up in the Big Ten entering his junior season. That’s no longer the case. The Colorado native showcased the kind of talent that made him a top recruit this past season, rattling off a 10-3 record and a fourth-place showing at the Big Ten Championships.

Now, the question for the wrestler picked as co-most improved on the team by his teammates (along with Ethan Smith) is about expectations rather than competence.

133 Pounds – At this point, it doesn’t seem like Ohio State has any clue regarding its likely 133-pound starter. The spring staple here, Jordan Decatur, can’t handle the weight cut and is moving away from 133. One of the Koontz brothers (Dylan and Brady), as well as 141-pounder Anthony Echemendia, may try to make the move, but neither of the former have showcased anything more than what Decatur had last season. Echemendia was also not a small 141-pounder, making this a very difficult cut for him.

“Anthony Echemendia is watching his weight,” Ryan said. “We don’t know if he can make it anymore, but he’s watching his weight closely. He’s very disciplined. We signed a kid named Benton Court out of Pennsylvania. You got the Koontz brothers that did well in Vegas (at the Cliff Keen Invitational) a year and a half ago and showed they could compete there. Decatur right now is moving out of the weight. He’s having a hard time making it.

“Obviously, we want a quick fix. We want someone in there this year, but the junior recruiting class is a high focus for us.”

The attempt to move to 133 was at least partially Echemendia’s call, which should put to rest rumors that the Cuba native is considering a transfer out from the program because Dylan D’Emilio seems to be firmly entrenched at 141 pounds.

“We try to stay out of what weight they’re going to go,” Ryan explained. “We try to leave it up to them. And occasionally there’s a situation where, like this one, you need to find someone that’s willing to sacrifice a little bit more — even more than you typically want to, from a weight standpoint.

“Weight is a tricky, finicky thing. But Anthony said, ‘You know, yeah, let me see. I don’t know if I can make it or not. I’ll keep an eye on my weight this summer. I’ll come in lighter, and let’s see if I can make it.’ He’s an option.”

141 Pounds – Voted as the team’s freshman of the year, D’Emilio took advantage of the opportunity afforded to him late last season. While Echemendia was out with an injury (and dealing with some immigration issues as well, according to Ryan), D’Emilio took up the mantle and performed well, earning a major decision over Purdue’s No. 28 Parker Filius and a victory against Michigan’s No. 30 Drew Mattin in the matches after Echemendia’s injury.

His ninth-place finish at the Big Ten wasn’t extraordinary, but he didn’t lose any matches that he shouldn’t have. If he can win a potential wrestle-off with Echemendia, he’ll be the guy at 141 this fall.

149 Pounds – It’s Sammy Sasso, and anything less than a national title will be a disappointment for the All-American, who came up just short against North Carolina’s Austin O’Connor in the title match last season.

157 Pounds – As it stands right now, it doesn’t seem that the answer at 157 pounds is currently on campus. Cleary is off to Pittsburgh (and may not have started this season anyway) and neither of Smith or Carson Kharchla is able to make the cut down from 165 pounds. Gallagher is the future at 157 pounds and will take over the spot next season without question, but Ohio State doesn’t want to burn his redshirt this season unless it absolutely has to, and even then, it won’t make that move until January.

“We don’t know yet,” Ryan said of the plan at 157 pounds. “We’re watching the portal closely. There are a couple of guys in the room: (Jashon) Hubbard … This kid Hubbard is really good, but he’s struggled between COVID and injuries last year. Nobody got to see him wrestle. He’s thinking about trying to get down to the weight. We’re watching the portal. And then, of course, we’ll watch Paddy. And we’ll see. Paddy will likely not come out of a redshirt. If he wants to be pulled, it won’t be until January anyway, most likely. We’ll keep an eye on Paddy, send him to a bunch of open tournaments and we’ll see how he’s progressing.”

That means that the likely starter here is somewhere in the transfer portal or will rely on a big drop from someone like redshirt junior 165-pounder Hubbard or on the return of Quinn Kinner. The latter is unlikely at this point – Kinner took the spring off for personal reasons – and the former is much too broad to pin down a specific pick at this point, so the BSB pick at 157 pounds right now is a transfer yet to be named. Hubbard is an intriguing option, but as Ryan alluded, there’s very little information on him right now.

165 Pounds – Kharchla is finally healthy after an ACL tear halted his redshirt freshman season before it could begin, and he’ll be the guy at 165 pounds if he can operate on that repaired knee.

That creates a logjam at the spot with how well Smith performed (11-2 before the NCAA Championships, runner-up in the Big Ten, fifth place nationally) because it’s always going to be hard to move a guy like that. However, Kharchla is an immediate national title contender and Smith’s frame looks capable of adding nine pounds. That was the plan before Kharchla’s preseason injury last season and will be again this season.

“He’s back,” Ryan said of Kharchla. “He’s been back. I mean, his knee felt strong enough in March to wrestle in the Big Ten. And we discussed it. But Ethan was wrestling so well and it just didn’t make sense. We figured it was best to give him the full rest that he needs before we try to rush it back. But he’s doing really well. He’s training, he’s full speed.

“He’ll be at 165. And if Ethan decides to stay at the weight, you’ve got a quarterback battle. You got two studs at 165. They both could win the NCAA. Ethan was certainly capable of winning it this year. He was right in the mix. And then, you’ve got Carson, who has beaten Ethan. It’s a good problem for us, and one of them will likely move up a weight. Neither one of them can move down to 57, unfortunately.”

As for the loser of that battle jumping up to 174 pounds?

“They’ll challenge (Kaleb Romero),” Ryan said. “The winner will hold the weight. And the guy that takes second will either stay at the weight and continue to wrestle them off at a later date, if it’s deserved, or move up to 184 and challenge there. It creates a ripple effect in your lineup.”

174 Pounds – Though he may look to wrestle-off with Smith or Kharchla here, a move up to 184 pounds would make sense for Romero, who also looks capable of adding some weight. He was also excellent last season before being hobbled by an injury late. However, Smith and Kharchla likely can’t go up to 184, and Ohio State has to find a way to get all three of these guys into the lineup, so it makes sense to pop the loser at 165 pounds in here and move Romero up a weight.

184 Pounds – It doesn’t sound like there will be much of a fight here. Rocky Jordan never looked especially comfortable at 184 pounds and should be able to make a move up to 197 pretty easily, especially because there really won’t be any sort of battle there – Gavin Hoffman has had his shot at this point. Slot Romero in here, unless he really wants to stick at 174 pounds and plans to take Smith out for it.

197 Pounds – As mentioned, Jordan always looked lean at 184 pounds. He has the power and frame to move up and isn’t going to face any resistance if he wants to make that move. This is a lot of uncertainty at a strength of the lineup last year because of all these weight changes, but Ohio State is in the business of maximizing its lineup, and there’s no way to do that unless Kharchla, Smith, Romero and Jordan are all in there in the backend.

Heavyweight – No moving here, and no battle before the season for Tate Orndorff. Gary Traub is off to Oregon State after losing the spot to the Utah Valley transfer last season and Orndorff flashed a lot of ability in his surprise All-American performance at the NCAA Championships. Ohio State will need that version of the heavyweight all season if it wants to contend in the Big Ten, but there’s no question that Orndorff is the starter here entering the season.