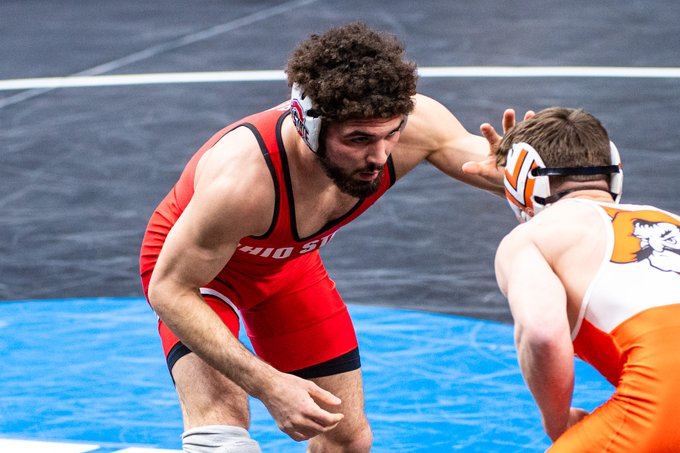 It was a fitting end to a frustrating season for the Ohio State wrestling team. Up and down; marred by an unbalanced lineup and problems with wrestling on bottom; and fueled by flashes of brilliance but ultimately disappointing, given the standards that head coach Tom Ryan has set during his nearly two decades in charge of the Buckeyes.

It’s hard to create much of a stink about a top 10 finish, as Ohio State checked in at No. 9 in the final team scores at the NCAA Championships, but given the teams that Ohio State measures itself against, it’s even harder to consider this anything but a down season in Columbus.

Those teams – Iowa and Penn State – sat atop the NCAA world… again. Conference foes Michigan (No. 5) and Minnesota (No. 7) checked in ahead of the Buckeyes as well, just as they did at the Big Ten Championships to open March.

That’s what makes the result – three All-Americans, one title finalist, no championships – a frustrating and fitting one for this season of Buckeye wrestling. The Buckeyes entered the season with hopes of returning to the top of the wrestling world and came up short.

Issues with the small details, tiny modifications that could flip a bout, those never came for this Ohio State team, even if it did see more coin flips land on the right side at the NCAA finals than it did in the conference finale.

“It’s tough,” assistant coach J Jaggers said prior to the NCAA Championships. “There are so many matches that are going to be decided where the margin for error is so slim. Then you have the Big Ten’s, and that was probably the worst performance we’ve had as a program in the last decade, finishing in ninth-place, which none of us were happy about. But when you circle back to a couple matches if you just flipped the outcome, just flip a position, one position in three or four matches, then we would have probably been fifth.

“So at the national tournament, the way it’s set up, you can do more with less people just because of the point scoring system and the format. If you don’t place at the national tournament, you don’t really score a lot of team points. For us, we have to punch as many guys through to become All-Americans. That’s where you get your points, and then obviously putting guys into the finals. I’d like to have a handful of All-Americans, everybody scoring points would be nice. (We have to be) realistic. There’s going to be a lot of points from Iowa, Penn State and some other schools, but I think if we wrestle our best we can bring home a trophy, which is top four.”

Ohio State didn’t wrestle its best, and didn’t bring home a trophy. The Buckeyes looked good in stretches – Sammy Sasso, Ethan Smith and Tate Orndorff all lived up to the hype and in some cases exceeded it – but didn’t have the juice needed to pose any real threat to the Hawkeyes or Nittany Lions that have been dominant at every turn this season. Ultimately, these Buckeyes were what they were and there wasn’t any amount of tweaking or pre-title preparation that would change that. The staff knew that going in.

“If anything, you dial back a little bit,” Jaggers said of Ohio State’s training entering the final event of the year. “You’re not trying to cram too much at the last second. They are who they’re going to be, (that’s not changing) in three days, so you just want to keep them sharp, concentrate on the areas that are going to show up in all the main, marquee matchups. Those, for the most part, boil down to the same things. Can you finish? How’s your lead management in short time? Can you get out on bottom in short time? Can you hold the guy down, lift and return them in short time? If you just watch the tournament, that’s where matches are won and lost. Those little short time situations and who can get to their stuff.”

Ohio State’s weekend in St. Louis couldn’t have started much worse than it did. No. 10 seeded Malik Heinselman fell to No. 21 Robert Howard of Penn State in the opening round at 125 pounds, his third match of the season against Howard and first loss after toppling him in both the regular season and Big Ten Championships.

Heinselman, who entered the Championships as a serious contender for an All-American (top eight finisher) spot, bounced back with a win over No. 26 Jackson DiSario from Stanford but fell to Michigan State’s Raymond Foley for the second time this season to end his season – well short of a top eight spot. Heinselman had a spectacular season and will look to contend for a title again next season, but three-and-out was a disappointing result for the Colorado native.

No. 30 Dylan D’Emilio saw a longer run in the consolation bracket than Heinselman at 141 pounds after an opening round loss to No. 3 Sebastian Rivera, but came up short of top eight status by two rounds, falling in the third consolation round against Oklahoma’s Dom Demas. D’Emilio wasn’t expected to seriously contend this season as a redshirt freshman after an up and down season, but impressed with victories over No. 33 Vinny Vespa (Hofstra), No. 19 Lane Peters (Army West Point) and No. 20 Brian Courtney (Virginia) after that first loss. He’ll likely enter his sophomore campaign as the presumed starter at 141 pounds.

The biggest name for Ohio State entering the tournament was No. 1 Sasso at 149 pounds, who came up just short of his first national title in a 3-1 loss to No. 2 Austin O’Connor in the finals. Sasso tore through his first four opponents, pinning No. 33 Cameron Hunsaker (Utah Valley) in round one, taking decisions over No. 17 Kyle Parco (Fresno State) 11-10 and No. 25 Yahya Thomas (Northwestern) 8-3 before pinning Oklahoma State’s No. 4 Boo Lewallen in the semifinals.

Sasso’s title bout with O’Connor came down to the final seconds and ended with a no-call that may haunt the Buckeyes through the summer. After escaping in just seven seconds to open the final frame, knotting the bout at 1-1, Sasso looked to be in tremendous shape. he held the riding time advantage and would take the victory if O’Connor could claim more points.

The North Carolina native found those points. He claimed a takedown with about a minute left to wrestle, leaving Sasso without riding time and in need of a takedown to work himself back into a tie. With just seconds remaining, Sasso landed what certainly looked like a takedown, but the referees decided against tossing up the two signal both live and upon further review, giving O’Connor the victory and sending Sasso home as the runner-up.

Smith was one of those bright spots for the Buckeyes at this event. He entered as the No. 7 seed in the 165 pound region and left as an All-American, wrestling all the way to the semifinals before falling 4-2 to No. 3 Jake Wentzel (Pittsburgh) and No. 10 Travis Wittlake (Oklahoma State) in the consolation semifinals, sending him to the fifth-place match against No. 5 Zach Hartman from Bucknell.

It took an extra minute, as the two wrestled into a sudden victory period, but a Smith takedown secured a 7-5 decision and a fifth-place finish for the Buckeye. For Smith, who was nearly the odd man out of Ohio State’s lineup before Carson Kharchla suffered a season-ending injury, his run to All-American status was a result of belief and a change in mentality.

“Nine or 10,” Smith said when asked to assess his 2021 campaign. “I think every time I’ve gone out there, I’ve given my best. Sometimes maybe I wasn’t feeling my best or looking my best, but I definitely went out there every time and gave everything I had.”

“It was just belief,” Smith said. “I think the only difference between me last year at 165 and this year is that I have more confidence and more belief in myself, belief that I am capable of wrestling with these top guys and that I can actually try to win those matches versus keeping it close or not getting beat by a whole bunch.”

Though he entered with that same No. 7 seeding in the 174 class, Kaleb Romero didn’t reach that same status that Smith and Sasso ended their seasons with. He won his first two matches but fell to No. 2 Demetrius Romero (Utah Valley) in the quarterfinals and No. 5 Logan Massa (Michigan) in the consolation quarterfinals to come up short of that top eight finish. It was a challenging end to the season for Romero as he dealt with a nagging leg injury, and he’ll look to return to All-American form next season.

Like D’Emilio, Rocky Jordan entered the 184 weight class as a low seed (No. 24), fell in the first round to No. 9 Jeremiah Kent (Missouri) but made a decent run in the consolation rounds before falling to No. 5 Hunter Bolen (Virginia Tech) in the fourth round, short of placing but still much further than was expected when he entered the finals.

Orndorff rounded out Ohio State’s All-Americans at heavyweight, where he vastly outperformed his No. 21 seeding with a run to the consolation quarterfinals before losses to No. 14 Trent Hillger (Wisconsin) and No. 9 Greg Kerkvliet (Penn State) ended his season in the No. 8 spot.