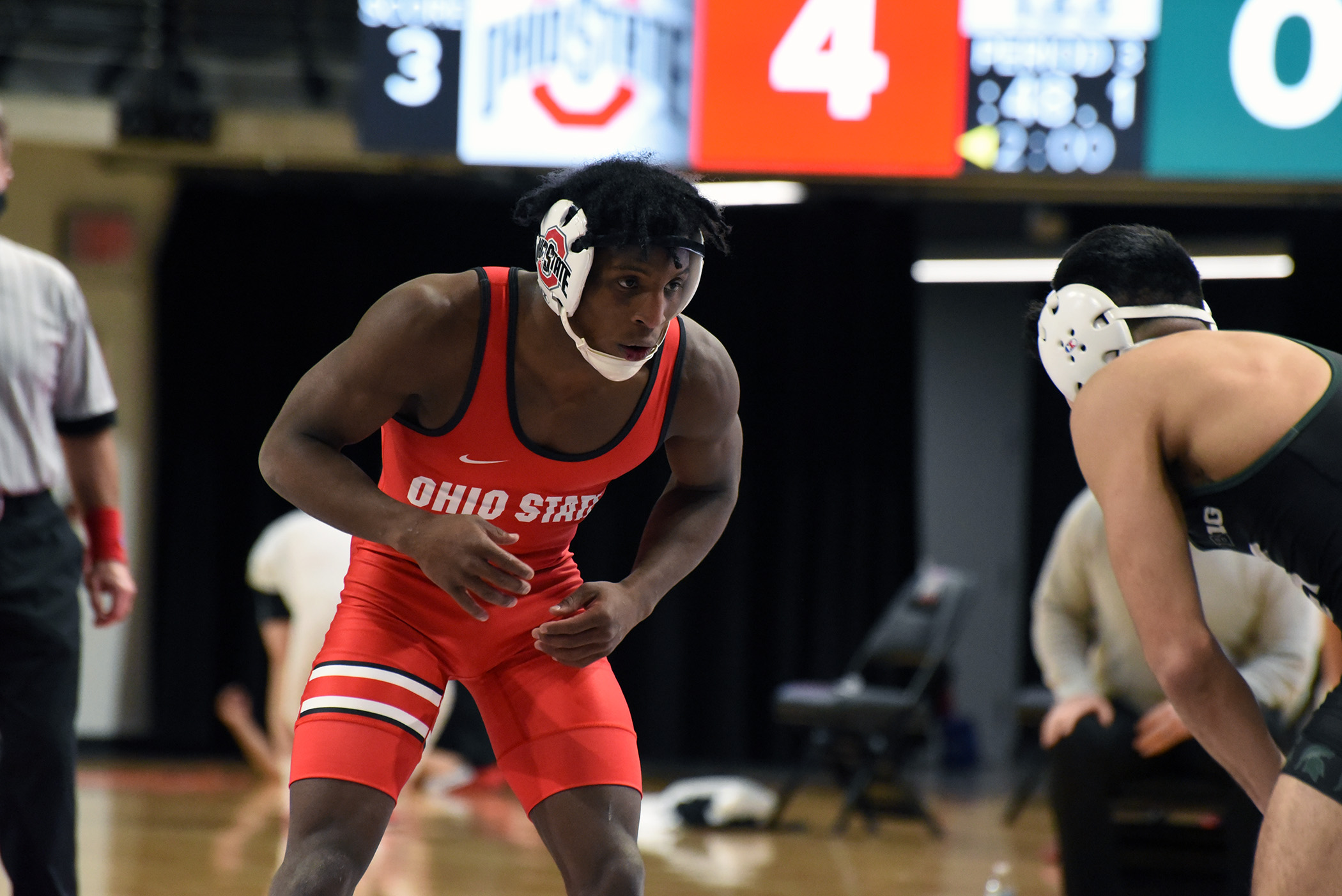 It didn’t take long for Ohio State to establish itself on the road in a dual against Maryland on Sunday afternoon. The red-hot Malik Heinselman opened the day with a fall victory over Zach Spence in just under four minutes, and it was all-Buckeye from there on the way to a 41-0 victory to improve to 4-1 on the season.

At 141 pounds, new starter Anthony Echemendia carried over the momentum that he generated in a win against Michigan State’s Jake Spiess on Friday night, knocking off Danny Bertoni, 8-6. It was another case of struggling on bottom and with stamina for the Buckeye freshman, but a quick start, paired with a late takedown was enough to stave off Bertoni’s comeback bid.

Sammy Sasso was able to bounce back after a shaky showing on Friday, earning some more bonus team points for the Buckeyes with a third-period pin of Hunter Baxter, extending the OSU lead to 18-0.

It was another defensive, quiet bout for Elijah Cleary, but that approach was enough to earn a 4-3 victory, with Michael Doetsch unable to pull off a late takedown that he would have needed to snatch the win away from Cleary.

Out of the halftime break, Ethan Smith continued his great run of form against Jonathan Spadafora, earning a 24-11 win to follow up his major decision win on Friday night. It was a similar showing against Spadafora, as Smith went on a takedown rampage (five in the first two minutes of the bout) during his hunt for a tech fall. While that hunt would come up just short, Smith did still grab the major decision to put Ohio State up 25-0.

Kaleb Romero beat up on the second Spadafora brother, Phillip, at 174 pounds, securing a major decision of his own for the second straight dual, 19-8.

At 184 pounds, Rocky Jordan was finally able to reverse his recent misfortunes and grab a 4-2 victory over Kyle Cochran thanks to a reversal with just three seconds remaining in the bout.

Former heavyweight Chase Singletary got the nod at 197 pounds in place of Gavin Hoffman, who took a tough loss on Friday night. It was a positive showing for the newest addition to the Buckeye starting lineup, as he toppled Jaron Smith in overtime, taking a sudden victory with a takedown.

Heavyweight Tate Orndorff closed out the dual with yet another victory, completing the sweep for Ohio State with a pin of Garrett Kappes and setting the final tally at 41-0 in favor of the Buckeyes.