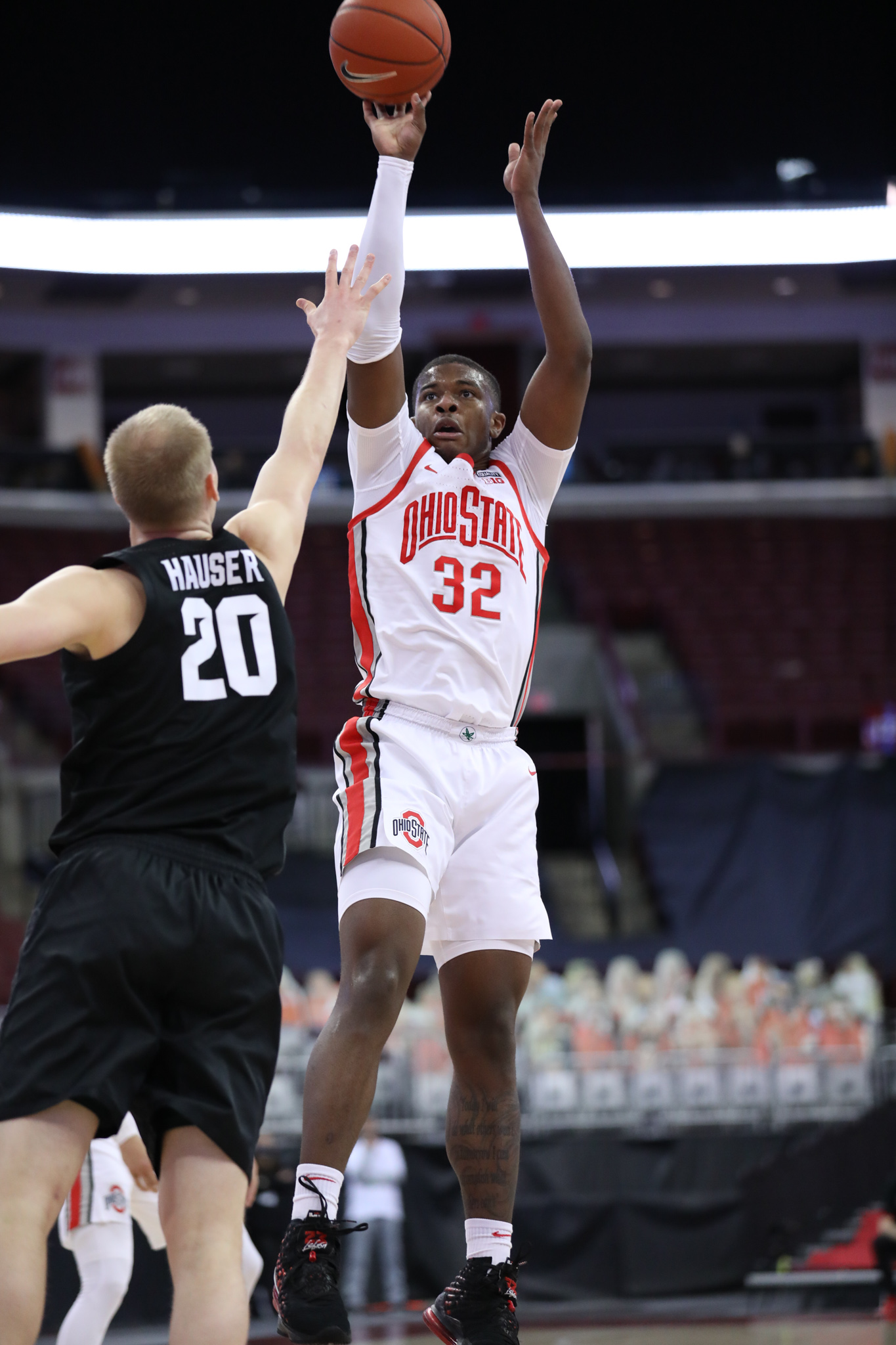 Despite three-pointers from Liddell and junior wing Justin Ahrens in the opening two minutes, Ohio State trailed the Spartans 7-6 through the opening 3:20.

Liddell gave the Buckeyes a 9-7 lead by converting an and-one with 16:40 until halftime, and they did not squander that advantage. A mid-range jumper from Liddell and a smooth right-handed hook by senior forward Kyle Young pushed the lead to 13-7 five minutes into the contest.

“Our plan was to come out, set the rules early, be the more aggressive team, tougher team,” Young said. “And I think we were able to do that offensively and defensively early on, which helped carry us throughout the rest of the game.”

Michigan State cut the deficit to four points twice after the first five minutes, but Ohio State controlled the first half. The Buckeyes took their largest lead at 42-28 on a triple by Ahrens with 1:28 until intermission.

After committing just one first-half turnover, Ohio State gave the ball away three times in the first four minutes of the second half.

“We have to be better. We had some sloppy possessions; we’ve just got to be better, and we’ve got to be better in those moments,” Ohio State head coach Chris Holtmann said. “And it’s not it’s not easy or else everybody could do that. And there are some times you’re going to play and teams are going to make a run on you because they’re good, and it’s the best league in the country and it’s talented teams you’re playing.

“And Michigan State’s obviously a talented team and give them credit for that, but I did think a couple of the possessions were self-inflicted. At the same time, a Tom Izzo team’s not going to fold, they’re not going to quit, they’re going to fight to the very end, and we expected that. But there are certain things that I’m looking at and saying we do have to clean up.”

The Buckeyes maintained their double-digit advantage thanks to two blocks and two free throws by Liddell and a steal and finish by fourth-year junior wing Justice Sueing.

Liddell showed great patience when he went to his right-handed hook with 14:59 on the clock to push the Buckeye lead to 48-34. Spartan fourth-year junior forward Joey Hauser responded with a bucket, but the next basket came via Ohio State senior forward Seth Towns on a difficult mid-range jumper following a shot fake.

The Buckeye lead swelled to 61-41 with 9:12 to play with an 11-3 stretch that spanned 2:36, highlighted by six points by Sueing, a mid-range jumper by Liddell and a triple by junior guard Duane Washington.

“We don’t win the game without him having the second half he did,” Holtmann said of Sueing.

Once Ohio State pushed its lead to 20, the Spartans bounced back with back-to-back three-pointers. Liddell responded with an old-fashioned three-point play and Towns hit a turnaround fadeaway off the glass with two Spartan foul shots in between. The Green and White continued to battle, using a 6-0 spurt to cut the Buckeye lead to 68-59 with 4:20 left.

“There are just certain little things we’ve got to do at the end of the stretch, whether it’s fouling — we had a lot of bad fouls in the second half, whether it was on jump shots, I had one that I found on a jump shot, or offensive rebounds — they had a lot of second chance points,” Ohio State fifth-year senior guard C.J. Walker said. “Making sure teams don’t get second chances and rebounding — it’s just little things that we’ve got to get better on, and I feel like that we will improve on after we watch film and we know what we need to improve on.”

Walker helped Ohio State hold off the late Spartan surge, knocking down a pair of foul shots in a one-and-one situation and burying a mid-range jumper to push the lead to 72-60 with 3:26 on the clock.

“It was a big play,” Holtmann said of Walker’s jumper. “He got to his right-hand pull up, which he’s really effective at. It’s been great having him back. His ball-handling was important for us. He did a good job of getting what we wanted there.”

Following a pair of free throws by Michigan State, Liddell drilled two foul shots, and Young hit a fadeaway jumper after grabbing an offensive rebound to put the Buckeyes up 76-62 with 2:14 to play.

Walker finished with 10 points and a team-high three steals, while Sueing added 17 points and seven boards.