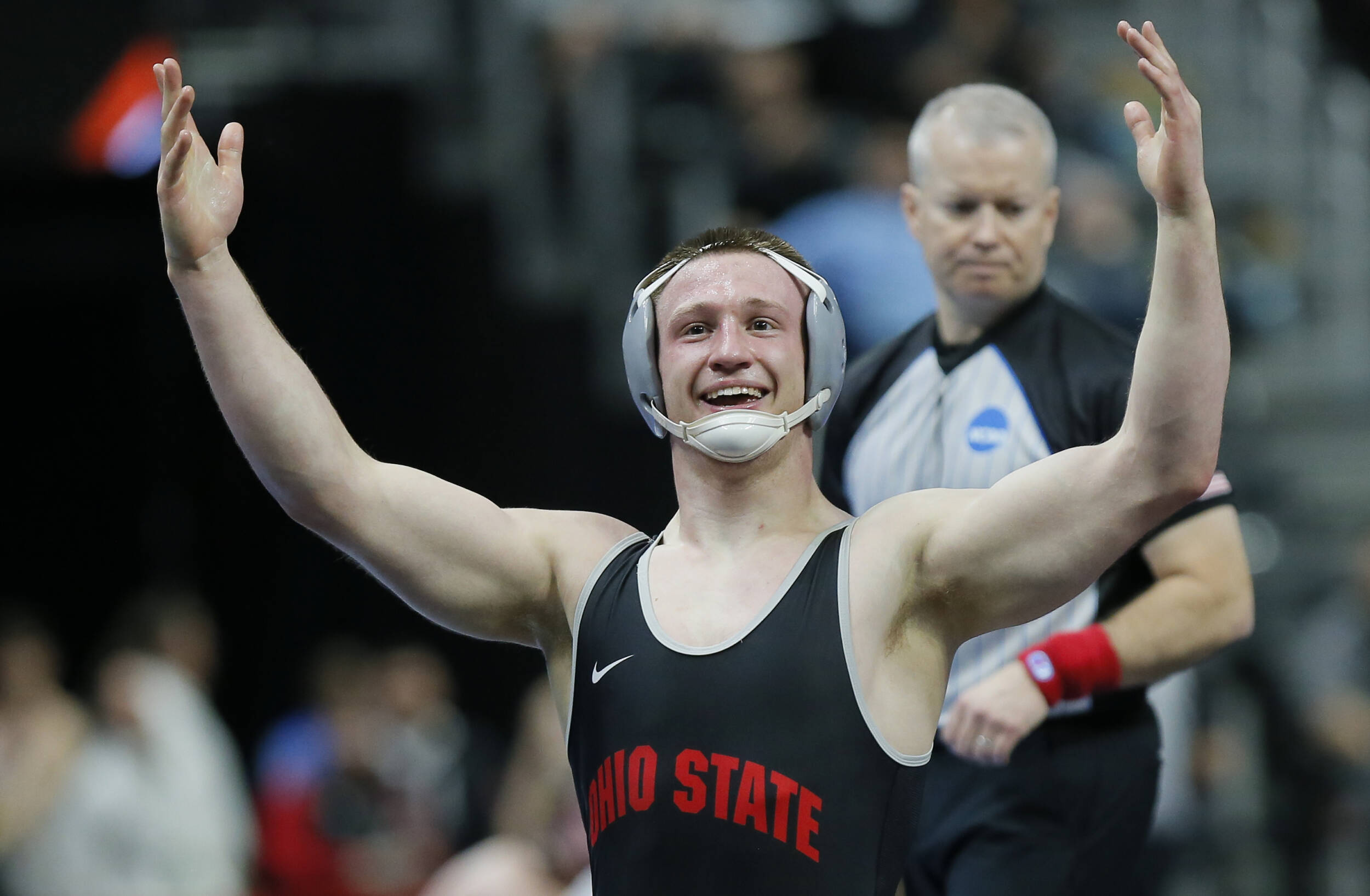 Gavin Hoffman thought he’d create his version of a “revenge tour” at the 2022 NCAA Championships. Like Malik Heinselman from last season, Hoffman is on a mission to prove that he is one of the top wrestlers in his weight class — something that became clear when he reached the 197-pound semifinals on Friday afternoon.

Hoffman defeated No. 13 Jake Woodley of Oklahoma in a 5-3 decision to claim his first-career All-American award. The Montoursville, Penn., native started the scoring with a two-point takedown but allowed a Woodley escape, which brought the match to 2-1 after the first.

Hoffman will face No. 1 Max Dean of Penn State in Session IV on Friday night. The winner advances to the 197-pound national championship.

Sasso defeated No. 5 Kyle Parco of Arizona State 3-1 in sudden victory to advance to his second consecutive NCAA tournament semifinals. He became the 1th three-time All-American in Ohio State history with the win.

While both wrestlers took shots in the first period, neither Sasso nor Parco scored after three minutes. Sasso started the second on the bottom and escaped to take a 1-0 lead with 1:30 remaining. The Nazareth, Penn., native held the one-point advantage until Parco cut loose at 1:23 to tie the bout at one-all and bring the match to sudden victory.

Sasso secured a two-point takedown in the extra period and punched his ticket to the semifinals, where he will square off with No. 1 Yianni Diakomihalis of Cornell on Friday night.

KHARCHLA AND ROMERO’S TITLE RUNS END IN THE QUARTERFINALS

Carson Kharchla fell short of his goal to win a national championship at 165 pounds when he lost a hard-fought 2-0 decision to No. 2 Keegan O’Toole of Missouri in the quarterfinals.

Kharchla and O’Toole battled in the first two periods. Both wrestlers traded shots and resisted takedown attempts to keep the match scoreless for almost five minutes. O’Toole earned the match’s first point when he escaped Kharchla’s hold with 1:10 remaining in the second.

In the third period, Kharchla started on the bottom and hoped to break free for an escape point. However, the Missouri wrestler held firm and added a riding time point to win, 2-0. While not the result Kharchla wanted, he will still have many matches ahead of him and can still secure his first-career All-American award.

Kharchla will face No. 13 Julian Ramirez of Cornell in the consolation bracket on Friday night. If he won his remaining matches, his highest finish at the NCAA Championships would be

Kaleb Romero wrestled a familiar opponent in No. 2 Aaron Brooks of Penn State in the 184-pound quarterfinals. However, the Ohio State redshirt senior fell behind early and lost a 13-2 major decision to his Big Ten rival.

Brooks — the defending NCAA Champion — struck first with a two-point takedown but allowed Romero to escape. He took Romero to a takedown clinic and held a 10-2 lead with two minutes left. Romero kept Brooks from earning a technical fall. Still, the Penn State wrestler added three more points in the third to claim the 11-point win.

Romero will face either No. 30 Max Lyon of Purdue or No. 27 Keegan Moore of Oklahoma in the consolation bracket on Friday night. He will look to claim his first-career All-American award in his second NCAA Championships appearance (the 2020 tournament was canceled because of the pandemic).

IN THE CONSOLATION BRACKETS