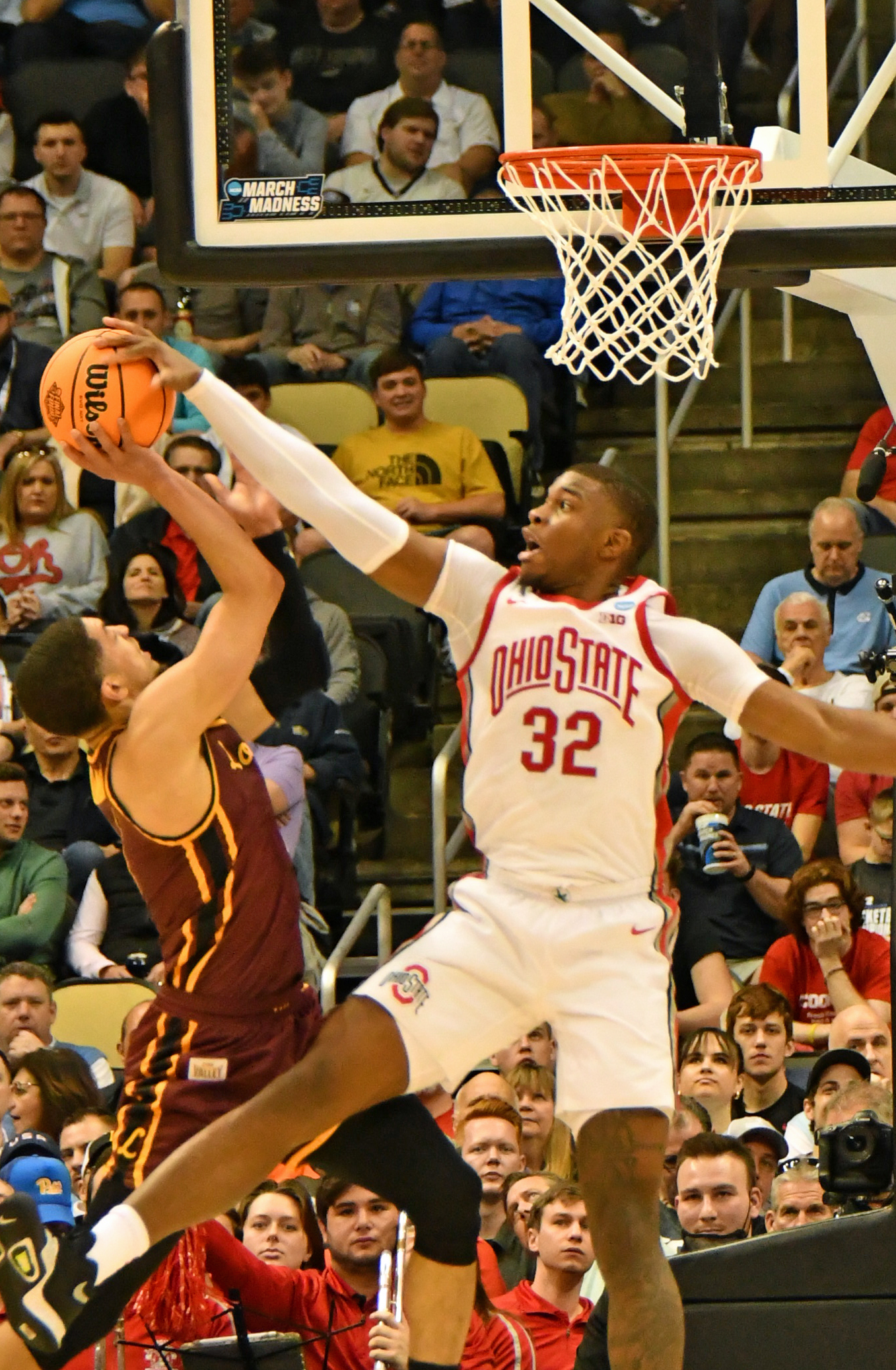 Ohio State knew coming into its NCAA Tournament-opening matchup with 10th-seeded Loyola Chicago that it would need to get creative to score against a stingy defense, and that it would need significant defensive versatility to deal with a ball screen-centric Rambler offense. It picked up a major boost in both respects when center Zed Key and super senior forward Kyle Young were cleared for play prior to the March 18 matchup and took full advantage, holding Loyola Chicago to a 26.8 percent shooting performance from the field while grinding out enough offense to survive and advance, 54-41.

The first half offered a mixed bag for the Buckeyes. That vaunted Rambler defense lived up to its reputation, holding Ohio State to just 23 points while forcing eight turnovers, but it was the maligned Ohio State defensive unit that ruled the half.

A trio of triples – two from guard Braden Norris – kept Loyola Chicago within striking distance, but the Ramblers converted just seven shots on 30 tries in the first frame and suffered seven turnovers of their own, stumbling to a 23-18 halftime deficit. It was that defensive outburst – along with 10 points from the youngster, Malaki Branham – that allowed Ohio State, despite taking 10 fewer shots than their foes and missing on all nine of their 3-point tries, to hold that slight edge.

“Our defensive effort has been really good,” Holtmann said as his team entered the break after a half he described as a rock fight. “Offensively, we have to move the ball a little bit better – it’s hard against their defense. We have to attack close-outs a little bit better, we settled a few too many times and we have to play faster in transition but again, I give them credit, their defense is good.”

The second half started a whole lot like the first. The opening four minutes of play saw seven fouls, seven turnovers and several offensive possessions that would make even the most ardent defensive coach blush, but they also saw Ohio State adhering closely to Holtmann’s halftime words of wisdom.

After losing the ball on their first two offensive possessions, the Buckeyes rattled off three straight buckets to claim their largest advantage of the afternoon, 29-18, after a Young hookshot that forced Loyola Chicago head coach Drew Valentine into a quick timeout. The Ramblers would break into the scoring department in short order with another Norris triple and a Chris Knight dunk, but Young and Liddell chipped in buckets of their own to take a 33-23 lead into the under-16 timeout (which came with 14:17 left).

The offense, which was rapidly bordering on the wrong kind of offensive, would not improve. Meechie Johnson Jr. extended Ohio State’s lead to 13 points with the first OSU 3-pointer of the game with 13:39 to play, but it took another four minutes for the Buckeyes to put the ball in the hoop from the field again with a Liddell jumper.

He pitched in one free throw during the dryspell as well, but unlike with so many Buckeye droughts this season, this one did very little damage to the OSU lead. Loyola Chicago rattled in two 3-pointers but could muster no more, pulling within just eight points at 37-29. A Ryan Schwieger 3-pointer cut the deficit back to eight after a Liddell basket and one more free throw, but every Rambler push was met with an OSU reaction that moved the Buckeyes back ahead by double digits. In the case of the Schwieger make, it was a Jamari Wheeler layup, which sent the two into the under-eight timeout at 42-32.

Even when Branham went to the bench after picking up his fourth foul with just under seven minutes on the clock, Ohio State found a way to stave off any surges. It snared four points at the line, held the Ramblers to just one field goal, and immediately matched its largest lead of the evening, 48-34, when Branham returned with just over four minutes left and converted on a layup.

A Norris triple brought the Ramblers again within nine, but they would never draw closer. Branham and Cedric Russell notched a pair of free throws to push the Buckeyes back into a 13-point lead and Young teamed up with Eugene Brown III for the exclamation point, with a Young block on one end into an uncontested Brown dunk on the other, pushing Ohio State ahead by 15.

Liddell led the Buckeyes with 16 points, while Branham added 14 in his NCAA Tournament debut. Norris, with 14 points, was the only Rambler in double digits.