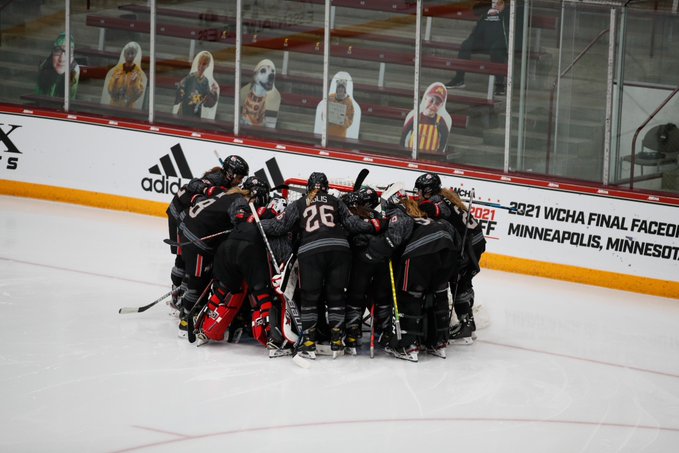 Just about every part of No. 3 Ohio State’s NCAA Tournament quarterfinals game against No. 6 Boston College was sloppy. To say that both teams were suffering from some postseason nerves may be reductionist, but it may also be fair, given the struggles faced by the Buckeyes and Eagles on Friday night. Both sides opened the game like heavyweight boxers, feeling each other out, passing around the dish but not looking to attack out of fear of making a mistake.

The mistakes would come nonetheless. Boston College went down a skater early in the first period after a penalty, but the Buckeye power play went begging. Only moments later, Ohio State followed suit with Gabby Rosenthal taking a trip to the box, but the No. 2 ranked Buckeye penalty kill held up to keep the game knotted at zero.

It wasn’t until later in the first frame that either team found the back of the net, again on a misfire, this time with Boston College claiming a rebound off of Buckeye netminder Andrea Braendli’s pads and quickly finding Savannah Norcross, who bagged her team-high 11th goal of the season from the slot.

Both teams saw a player sent to the box for roughing shortly after the goal, with Tatum Skaggs from Ohio State and Maddie Crowley-Cahill getting tangled. Rosenthal again found her way to the box, this time for hooking, but Ohio state blocked both BC shots during the penalty kill and returned to even strength unscathed.

Another Buckeye error in their own end nearly led to a second Boston College goal late in the first period, but some snapped defending prevented a disastrous start for the WCHA runner-up.

After a first period that tiled heavily towards the underdogs, Ohio State returned to its regular season form in the second frame. The Buckeyes generated shot after shot on Boston College goaltender Abigail Levy and finally found the net for an equalizer on another power play, this time with Deidre Mullowney in the box for high-sticking. Jenna Buglioni notched her eighth goal of the season on a furious scramble for the puck in front of Levy.

With 36 seconds to play in the period, Brooke Bink put the Buckeyes on top after another scramble for the puck, this time beating Levy with a shot right by the post, capping a second period that saw Ohio State toss 32 shots on net to Boston College’s nine.

The final frame opened as the first two had played out: shakily. Neither team was able to generate much of anything for the first six minutes, and a Levu positioning era near led to disaster for the Eagles, but quickly turned into trouble for the Buckeyes when an Eagle breakaway off of the miscue became an Ohio State tripping on Jennifer Gardiner.

The Buckeye penalty kill pulled through again, keeping the lead in place after a relatively harmless power play from BC.

With 6:30 to play, it was the star of the Buckeyes, Emma Maltais, that put the game on ice for Ohio State, as she has so many times during her four-year career. Maltais fired a wrist shot nearly from her own bench that caught Levy just right and bounced into the net, claiming a 3-1 lead that OSU would not look back from.

The Buckeyes will take on Wisconsin for the sixth time this season on Thursday, March 18. Wisconsin leads the series 3-2 after a victory in the WCHA championship two weeks ago.