What We Learned: No. 3 Ohio State Pulls Away From Indiana But Not Without Issues 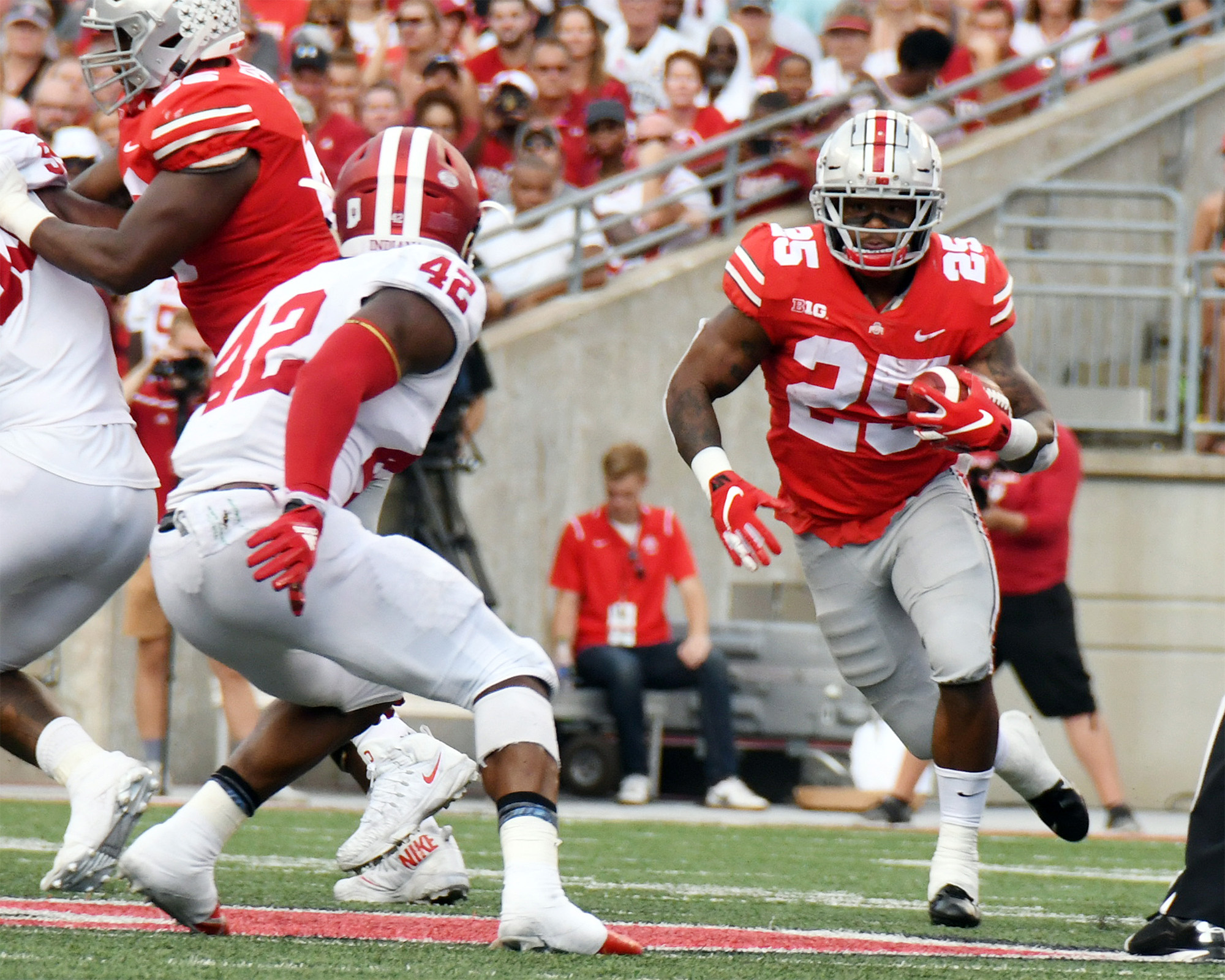 After an eight-point halftime lead changed slightly to a nine-point edge into the fourth quarter, Ohio State ultimately proved too much for Indiana as the Buckeyes bounced the Hoosiers with two unanswered touchdowns in the final 12:21 to take the Big Ten tilt 49-26 before 104,193 on Saturday at Ohio Stadium.

No. 3 OSU (6-0, 3-0) overmatched IU (4-2, 1-2), which ran out of gas down the stretch. Good and bad, though, several Ohio State observations surfaced for the Buckeyes before they showed out in the second half for their eventual 23-point win.

For those who have been watching since the season started, the first takeaway is nothing new. OSU entered the Indiana game ranked 120th in college football with 42 penalties for 403 yards, a per-game average of 8.4 flags for 80.6 yards, across its first five contests. Against the Hoosiers, Ohio State just about equaled its usual for the campaign with nine fouls for 82 yards. Majority of those miscues allowed IU to extend drives and, as a result, hang around until the fourth quarter. The Buckeyes have far too many veterans, both on the roster and the staff, to let discipline remain an ongoing issue with each week. Six games into the season, something simply has to change by now.

In the same breath as penalties, discipline lacks for OSU among its defensive backfield. Sophomore safety Isaiah Pryor missed the first half after targeting in the second half Sept. 29 at Penn State forced his ejection and suspension, leading Ohio State to start sophomore safety Jahsen Wint instead. Wint fared poorly, allowing Indiana’s Stevie Scott to take a 45-yard run on the Hoosiers’ third play from scrimmage on the opening drive in the first quarter. Wint was the tip of the iceberg as junior cornerbacks Damon Arnette and Kendall Sheffield had their issues, and IU’s Peyton Ramsey picked them — as well as sophomore cornerback Jeffrey Okudah — apart at times en route to 26-of-49 passing for 322 yards and three touchdowns. Pryor returned in the second half, but even he had his issues.

Scott’s big gain formed nearly half of Indiana’s total on the ground as the Hoosiers compiled 84 yards on 21 rushes, but IU made its money taking deep shots, as alluded to above. Ramsey fearlessly took deep shots and completed four of them for 30 yards or more. Between the passes by Ramsey and Scott’s run, the five plays amounted to 130 of Indiana’s 406 total yards. Ohio State tried to dial up pressure on Ramsey, who attempted 10 rushes for 10 yards, recording three sacks and two quarterback hurries. Two forced fumbles between sophomore linebacker Tuf Borland and junior defensive tackle Dre’Mont Jones added to pivotal takeaways for the Buckeyes. OSU flashed up front, but the defense as a whole remains a work in progress after the less-talented Hoosiers picked the unit apart at times.

Sophomore quarterback Dwayne Haskins made his latest case for the Heisman Trophy as he went 33 for 44 (75.0 percent) for 455 yards and six touchdowns, but the two interceptions he threw came from the offensive line’s lack of protection. Problems continued in the trenches as the Buckeyes tried to run the ball with little success, hardly getting a push up front and leading to 154 yards on 48 attempts (3.2 per carry). OSU fed sophomore running back J.K. Dobbins, who flashed as a receiver out of the backfield with two catches for 25 yards, but he took 26 totes for 82 yards (3.2 average). Junior running back Mike Weber ran 13 times for 70 yards with a long of 21, Ohio State’s biggest gain on the ground, but the Buckeyes fell behind and attempted 16 third downs. Haskins bailed OSU out on offense, but in spots, the offensive line obviously has to be better.

Comparisons came around all week from fans and media, wondering how Ohio State would respond after another emotional comeback against Penn State. Last year, the high of the Buckeyes’ one-point win quickly dissipated when they went to Iowa the subsequent week and suffered their 55-24 shellacking at the hands of the Hawkeyes. Despite the sluggish start, which kept Indiana within striking distance until the fourth quarter, OSU ultimately handled its business and came away with the victory. Ohio State played noticeable notches below its best game and still emerged from week six with unblemished marks overall and in the Big Ten, and a three-score cushion to show for it. The issues need to be corrected, but the Buckeyes’ off performance resulted in their quarterback tossing six touchdowns and 49 points thrown on the board as they return to the Horseshoe for next Saturday’s noon matchup with Minnesota (3-2, 0-2) on Fox Sports 1.