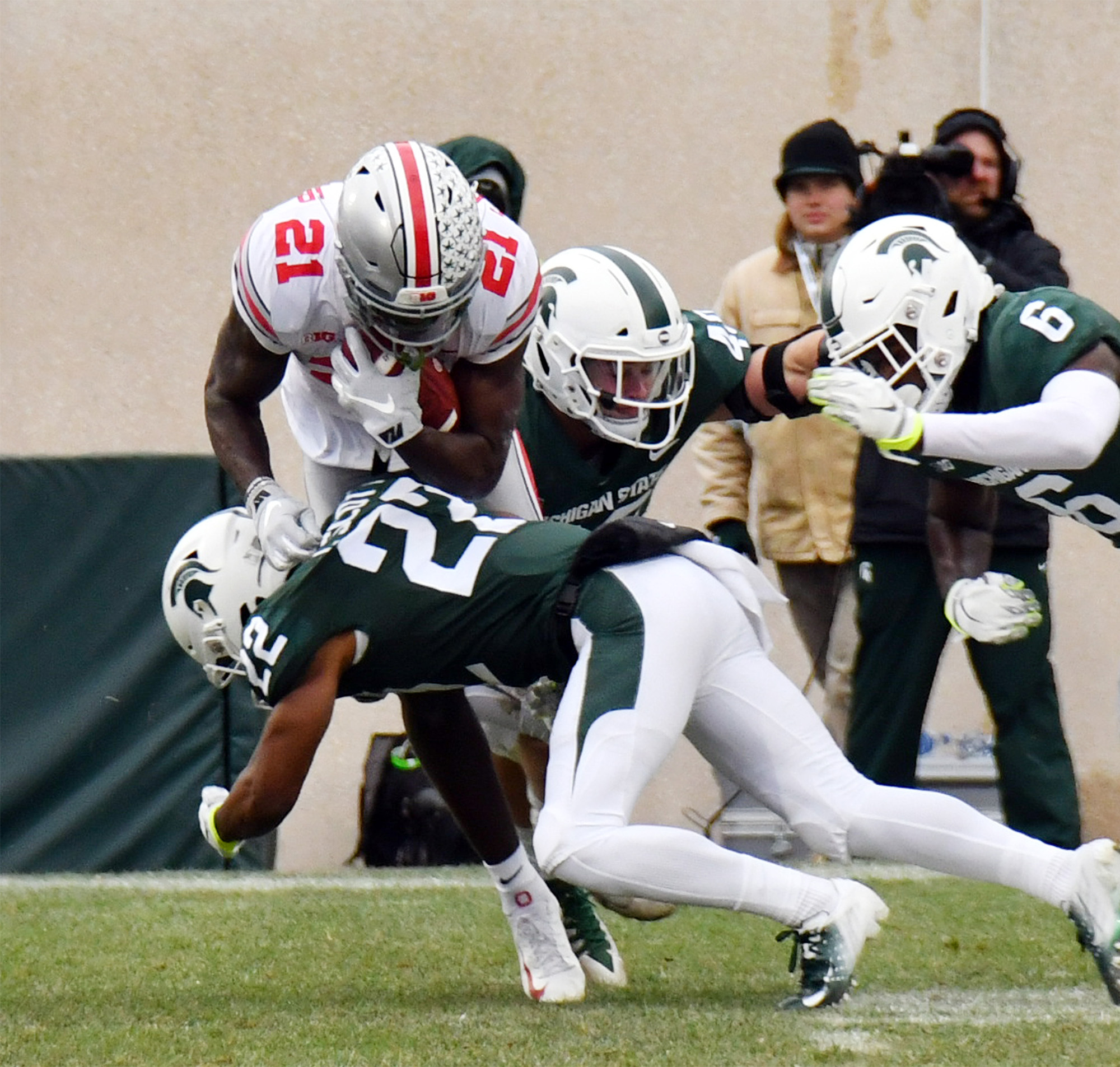 EAST LANSING, Mich. — Ohio State started to put the pieces of its season together Saturday at Michigan State, where the No. 10 Buckeyes pulled away from the No. 18 Spartans in a 26-6 victory in Spartan Stadium.

Over the past month, OSU’s issues have been widespread on both sides of the ball. How much of those problems were solved and what else is there to glean from week 11 against MSU? BSB breaks them down in what we learned.

Is there a spot for Tate Martell in Ohio State’s offense? After the redshirt freshman’s five-game hiatus, Martell returned to action for the Buckeyes and paved the way for the game’s first touchdown in the second quarter. On first-and-goal from Michigan State’s 6, he took a delayed draw 5 yards down to the 1, setting up sophomore quarterback Dwayne Haskins’ touch pass on third-and-goal to fifth-year senior H-back Parris Campbell and getting OSU on the board for its 7-0 lead with 1:29 left in the first half. It might seem like a small thing, but Martell made his case of why he should be on the field in situations such as the red zone given the offense’s collective struggles over the past month. His presence forced the Spartans’ defense to account for him and it paid dividends.

Against the No. 1 run defense in college football, Ohio State overcame its sluggish start on the ground and eventually opened up the 20-point rout in the second half behind an overall solid day at running back. While sophomore J.K. Dobbins mustered only 28 yards on 14 carries (2.0 average), the Buckeyes broke MSU down the stretch as junior Mike Weber took 22 totes for 104 yards (4.7 average) with a long of 18 and a 2-yard touchdown — the Detroit native’s first since Sept. 1 in OSU’s 77-31 victory against Oregon State to open the season. After the run game showed signs of life Nov. 3 in Ohio State’s 36-31 edge of Nebraska, the Buckeyes took things a step further and made a statement of sorts at Michigan State. Room for improvement remains, but OSU never abandoned the run and the offense needs that aspect if it ultimately hopes to keep building by the end of the month.

After he showed flashes in his first extensive action at safety, coming in off the bench and tying for a team-high 13 tackles off against the Cornhuskers, Brendon White proved the performance was no fluke. Rightfully so, the sophomore got the nod over redshirt freshman Shaun Wade — sophomore Isaiah Pryor did not make the trip — and White picked up right where he left off with his 5 tackles and 1 pass breakup. Next to junior safety Jordan Fuller, White stabilizes the defense the best and deserves to be the starter down the stretch. In case there were any doubts about his consistency, he proved it with another solid performance to round out the back seven best.

Ohio State has the ability to rely on its special teams unit if its offense is unable to get going, exhibited once again at Michigan State. Sophomore punter Drue Chrisman came back from a 4-yard punt on 4th-and-3 at the Buckeyes’ own 31, which went out of bounds and into the bleachers to give the Spartans’ prime field position at the 35 with 9:42 left in the first quarter, arguably playing the biggest role for the winning team. With a hat tip to fifth-year senior wide receiver Terry McLaurin, who downed several of the punts inside the 7, Chrisman belted 9 attempts for 340 yards (37.8 average) and plopped 6 tries inside the 20. While the offense took a while to get going, the defense was able to get a boost from special teams as Chrisman and company owned the field-position battle and evidently wore MSU down.

Give credit to Ohio State’s defense where it is due, but the Buckeyes were up against an offense that was simply unable to get out of its own way. Michigan State rotated quarterbacks Brian Lewerke and Rocky Lombardi to little success from either as the two Spartans combined to complete 18 of 47 passes (38.3 percent) for 220 yards and an interception — Lewerke’s errant throw picked off by Wade with 6:22 left in the fourth quarter to thwart any potential comeback attempt for MSU. OSU limited Michigan State, but the Spartans had no shot from either of the signal callers — a big reason why MSU has tumbled in Big Ten play with an ultimately disappointing season as the losses continue to pile up.