What To Watch For As Ohio State Opens Preseason Camp 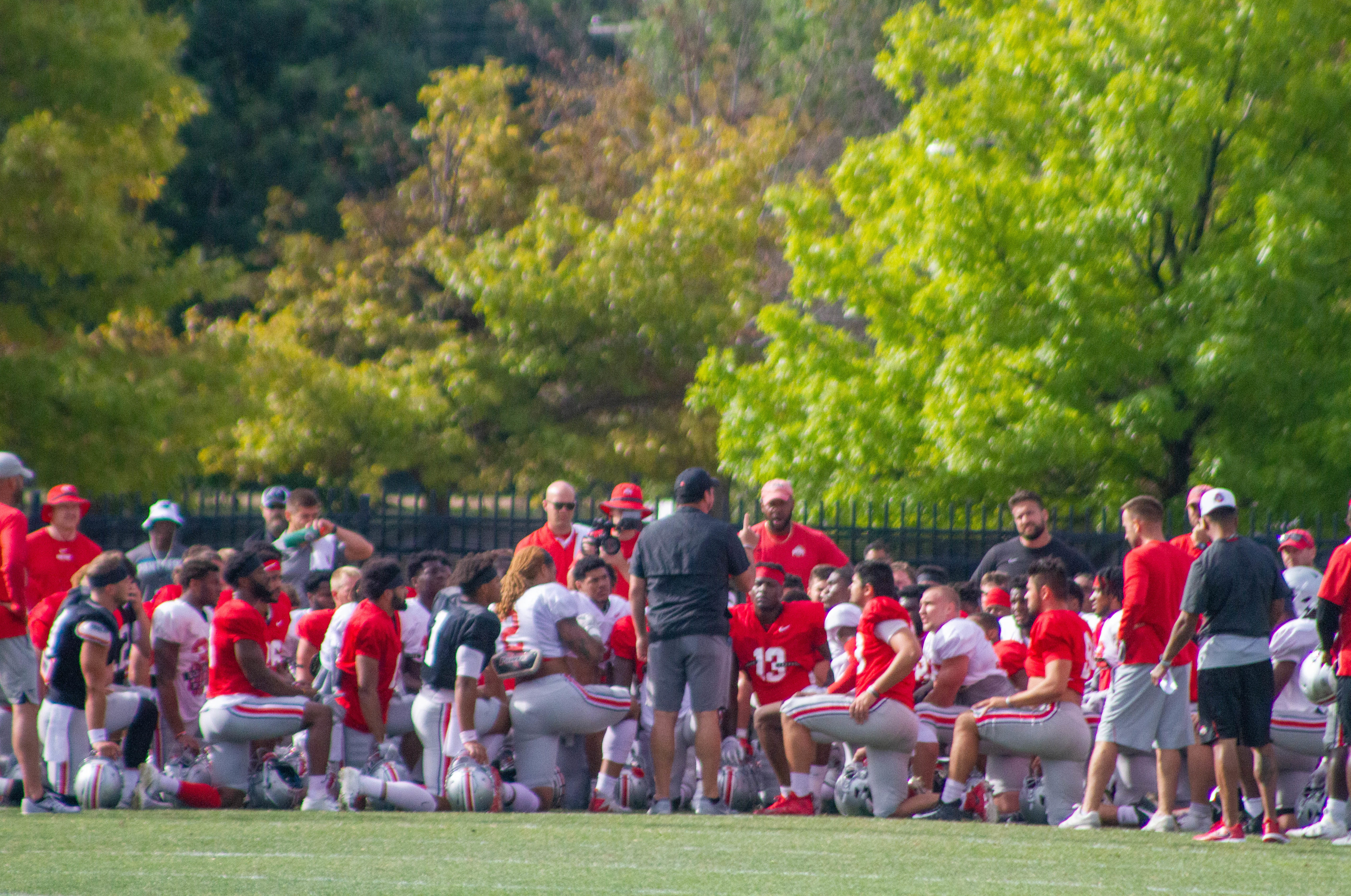 Wednesday marks the start of the 2021 football season for the Buckeyes, as Ohio State is set to take the practice field bright and early at the Woody Hayes Athletic Center for the start of preseason camp.

There will be no lack of buzzworthy storylines surrounding the program as camp opens, and especially following Monday’s news that Quinn Ewers –– the No. 1 overall prospect in the class of 2022 –– has officially reclassified to join the Buckeyes’ densely populated quarterback room a year early.

The late addition of the heralded Texas quarterback is far from the only developing story to keep an eye on during August though, as the Buckeyes must replace a double-digit NFL Draft class before vying for a third-straight College Football Playoff appearance this season.

Here’s a list of five things to watch out for during preseason camp in Columbus.

Last week Yahoo Sports reported that Ewers was leaning toward forgoing his senior season of high school football in Southlake, Texas, in order to pursue name, image and likeness opportunities, and on Monday, the nation’s top prospect made that decision official.

Ewers will now enter a position battle that was already three players deep at Ohio State, with redshirt freshman C.J. Stroud leading the way and Jack Miller and Kyle McCord making a run at the starting spot in their own right.

It would figure to be too late for Ewers to come in and take over the position ahead of Sept. 2’s season opener, but exactly what involvement he may have in Ohio State’s preseason affairs remains to be seen.

Head coach Ryan Day said at Big Ten Media Days on July 23 that he hopes to name a starter within the first two weeks of camp, but even if that is the case, it won’t exactly clear up what will likely be an ongoing quarterback controversy given the backlog of talent in the position room moving forward.

The recruitment of 247Sports’ No. 3 overall prospect J.T. Tuimoloau dominated headlines this summer, but despite the excitement in the Ohio State program surrounding the commitment of the stud defensive end, his entrance to the party is –– like Ewers’ own –– a late one.

Day said at Big Ten Media Days that Tuimoloau will have a “different” lead-up to the 2021 season than most players, which seems to indicate that he won’t be thrown into the fire in quite the same way.

What exactly Day’s comments mean in practice when it comes to Tuimoloau’s involvement, and whether or not he is fully participating in full-contact work while the program gets the Washington native up to speed, will surely be a story to watch in the coming weeks.

On the other hand, the game-readiness of Ohio State’s other five-star true freshman defensive end will be of interest as well. Jack Sawyer showed flashes in the spring game, and his production early on will likely be measured against that of Tuimoloau.

Another headline stemming from Big Ten Media Days that deserves to be followed up on during the early days of camp is whether or not the eligibility situation regarding USC transfer linebacker Palaie Gaoteote has been cleared up.

Gaoteote had been pictured with the Buckeye team this offseason, but no official word had been passed down confirming his status with the team leading into Day’s recent appearance in Indianapolis.

However, Day revealed on July 23 that Gaoteote is with the team, just not on scholarship yet due to an NCAA eligibility issue. Day said that the team expects to find out whether or not the former five-star recruit will be good to go in a couple weeks, which should align with the first week of camp –– give or take.

Will Gaoteote be fully involved in camp workouts and walkthroughs while his eligibility remains unconfirmed? That will be a topic to watch in the next several days.

The Ohio State defensive roster was missing some massive chunks during the spring due to injury, and especially on the back seven. According to Day though, most of those pieces will be ready to go by the start of camp.

One surefire starter expected to return is senior cornerback Sevyn Banks, while another potential starter at corner is Cameron Brown, who tore his Achilles in the Buckeyes’ second game last season.

Also in the secondary, hybrid safety Kourt Williams will be “full go” for Ohio State after missing his entire freshman season with a torn ACL suffered last preseason.

Dallas Gant, a senior that could start at middle linebacker for Ohio State this season, is another Buckeye that Day confirmed is supposed to be back for the start of camp as well.

How much different will Kerry Coombs’ defense look with a slew of important pieces ready to go? That remains to be seen, but Ohio State did utilize the Bullet position quite a bit in the spring, which will be another storyline to keep an eye on.

You can expect a new set of captains to be named for Ohio State a couple weeks into camp, and with all seven of last year’s captains gone from the program –– including Fields, Tuf Borland, Wyatt Davis, Jonathon Cooper, Justin Hilliard, Josh Myers and Shaun Wade –– there will be plenty of new faces this season.

On offense, super-senior left tackle Thayer Munford will be a shoe-in, and one would think senior tight end Jeremy Ruckert and wide receiver Chris Olave have a strong chance of joining him in that distinction.

On the other side of the ball, returning All-American super-senior defensive tackle Haskell Garrett will likely be named a captain, and with the emergence of junior defensive end Zach Harrison as a vocal leader on the team, he could be as well.