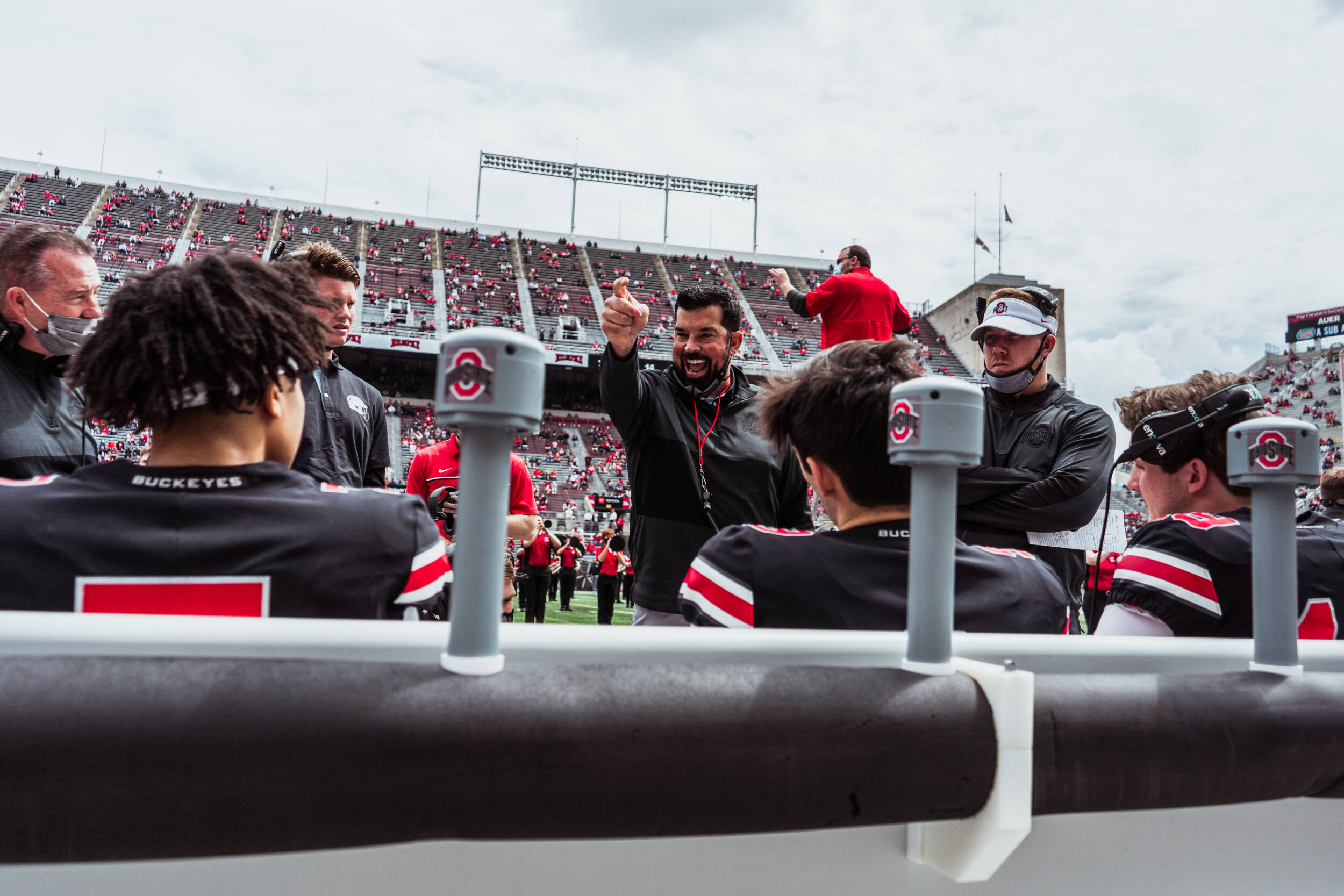 With Ohio State opening fall camp on Wednesday, and welcoming reporters back into the Woody Hayes Athletic Center to talk to coaches for the first time since early 2020, Buckeye Sports Bulletin is jumping back into the preview game with position-by-position looks at the team ahead of media availability with the respective position coaches.

1. What does Ohio State do with Quinn Ewers?

There isn’t a more important position on the field than quarterback, and there’s not a position with more recent drama around it at Ohio State. As the Buckeyes search for a replacement for Justin Fields after his departure to the NFL, they seemed to be headed for a pretty cut and dry answer. C.J. Stroud was the higher-ranked of the two 2020 prospects (ahead of Jack Miller) and played like it during the one glimpse we’ve seen of him, leading Ohio State’s signal-callers in the spring game. Miller was considered a safe option but a comfortable No. 3, behind the gunslinging freshman Kyle McCord, with Stroud assuming the starting role.

Of course, nothing can ever be that simple in Columbus. News broke on Monday that all-world recruit Quinn Ewers would be forgoing his senior season of high school football and enrolling early at Ohio State to cash in on prospective NIL deals and to start learning Ryan Day’s offense, while presumably competing for the starting job alongside his now-contemporaries.

That throws a pretty significant wrench into the decision-making process, even if Ewers isn’t expected to be a serious contender for the starting job. It’s hard to imagine Ohio State wanting to burn too much of Ewers eligibility with him planted firmly on the bench, but it seems unlikely that he would be ready to play from day one after joining fall camp late, a year ahead of his expected arrival. The other quarterbacks certainly aren’t rolling in experience, but the Southlake, Texas product couldn’t be any greener.

Does that mean that he could be in for reserve minutes, taking over for the presumed starter in Stroud when the game gets out of hand? That would certainly do well to groom the young star, but it brings about a second question for Ohio State.

2. What does that mean for Kyle McCord?

It seems like McCord and Miller may be the odd men out here, thanks to the class crunch that comes with landing (essentially) four quarterbacks in two seasons. If Ohio State is rolling with Stroud, that leaves Miller in a tough spot, but McCord finds himself in a similar situation if he can’t earn the No. 2 job behind Stroud.

Losing out to someone that just joined your class and arrived on campus eight months late isn’t usually a great sign for a quarterback, and it wouldn’t even be McCord’s fault – more just an issue of poor timing, and of Ewers being that highly regarded.

If McCord does win the job, of course, does Ohio State run the risk of losing Ewers to the transfer portal? Only one 2021 QB can earn the nod after Stroud is out of town, and it seems unlikely in the age of the transfer portal that the player considered to be running second would take a whole lot of time to think twice, opting instead to bounce to a school with an immediate opening for a starter, like Penn State or Texas.

The most important QB battle this season is obviously the one for the top spot, but the case can certainly be made that the 2021 recruit standoff is just as important long-term, if not more so. The winner there is the presumed starter for 2023, and if we’re being honest, could be a serious contender for the top spot in 2022 if Stroud doesn’t reach the ungodly standards set for him by Fields.

3. Is there any hope here for Jack Miller?

The true odd man out here seems to be Miller, the former four-star from Scottsdale (Ariz.) Chaparral. Once considered a prize of Ohio State’s 2020 class, Miller’s high school career was derailed late by injuries, seemingly inspiring the Buckeyes to look elsewhere for an insurance quarterback in the form of Stroud. Of course, stroud blew up as he hit the scene late, and suddenly Miller found himself serving as the insurance quarterback behind the new star.

In the two years since, after a season on campus and their first full offseason with the Buckeyes, it doesn’t seem as though that dynamic has significantly shifted between the two. Stroud was the better quarterback at the spring game and all reports from Ohio State seem to indicate that Miller was running third, behind his classmate in Stroud and the supremely talented McCord. A good fall camp can do a lot for a player, but it’s hard to imagine Miller making up a ton of great in such a small period of time.

That leaves him in a tricky spot, especially with Ewers arriving. There’s never a time to fully count out a player as talented as Miller, but the closer Ohio State gets to the season, and the more talented this quarterback room gets, the less space there seems to be for Miller.

It’s funny, through all of this, the least pressing question may be about the actual play from the starting quarterback himself. In all of the debate and handwringing about the future of the position, it seems that the present has drifted out of focus, and all signs are pointing toward Stroud being the present.

He lacks the flash and arm talent of his 2021 predecessors, but he looks to have the team around his, and the best grip on Day’s (albeit simplified) offense. It ran the best when he was on the field in the spring, and everything we’ve heard about him indicates that he’s taken over as a leader when the Buckeyes needed one in the wake of Fields’ departure to the NFL.

That doesn’t do much to answer the actual pressing question here though. How good is Stroud? Is he good enough to get Ohio State back to a national title game? Fields did it in 2020, but he was often tasked, alongside Chris Olave and Garrett Wilson, with carrying the Buckeye offense – an offense that looked janky until the final weeks of the season, when the running game kicked into gear. Is it fair to expect Stroud to do the same? It seems likely that the rushing attack will improve overall, but with a defense that looks as weak as it has in years, the ceiling for this team may depend once again on its quarterback.

Although that isn’t quite as fun as pontificating on the future of the position, it’s hard to argue with the importance of answering that question and answering it quickly. If Stroud is the guy, as we expect, when Ohio State takes the field against Minnesota in week one – and more importantly against a top 10 Oregon team in week two – he will need to be close to fully operational from the jump. Fields was, as was Dwayne Haskins, both under Day’s guidance. Can he keep the streak alive with Stroud?