‘What if…?’ Wednesday: What If John Cooper’s Record Against Michigan Flipped? 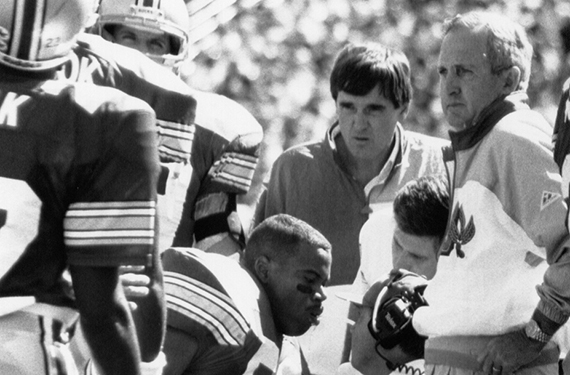 Buckeye Sports Bulletin has offered a “What if…?” scenario on the message boards in recent weeks that explores what would have happened events in Ohio State sports history had a different outcome.

For example, what if Nick Saban found success in the NFL? What if Ohio State men’s basketball found success and created a dynasty while the football team struggled? What if Ryan Day explored NFL coaching options while still the Buckeyes head coach? What if “Tattoo Gate” never happened?

This week, BSB asks the “What if…?” question in an article:

Six years into the John Cooper era, the Ohio State head coach hadn’t received much confidence from Buckeye fans that he could defeat Michigan and win The Game — or any big game, for that matter.

For some reason, Cooper couldn’t find a way to beat the university’s most hated rival. The program had endured five losses to “The Team Up North.” It’s 1993 team tied with the Wolverines, keeping them from a national title bid in the Rose Bowl.

Mike Vrabel, Luke Fickell and Matt Finkes fortified the defensive front, while Lorenzo Styles and Craig Powell provided a menacing tandem behind them. Defensive back Shawn Springs held down the secondary and showed flashes of greatness that would later make him the No. 3 overall pick in the 1997 NFL Draft.

Still, Cooper’s team would lose three games to Washington, Illinois and Penn State before its anticipated matchup with Michigan. The Buckeyes fell 25-16 to the then-No. 25 Huskies in their second game and lost to the Fighting Illini by 14 points in Ohio Stadium. However, the team’s most significant loss came against the Nittany Lions, who used Columbus product Ki-Jana Carter’s four touchdowns to annihilate Ohio State, 63-14.

Like Ohio State, Michigan needed a rivalry victory to finish the season on a high note. The Buckeyes bounced back to wins over Wisconsin and Indiana heading into The Game. Michigan also had lost three games — a 27-26 loss to then-No. 7 Colorado, a 31-24 loss to then-No. 3 Penn State and a 31-19 loss to unranked Wisconsin.

Ohio State’s athletic department rallied fans to Ohio Stadium and gathered over 300 former players to form a tunnel surrounding the team as the Buckeyes entered the field. Cooper’s team fed off the crowd to a 12-3 lead at halftime.

Cooper unleashed a spirited halftime speech in the locker room that involved punching a defenseless chalkboard. His emotion offered his team the energy and passion they needed to hang onto their nine-point lead in the second half.

“That got a real spark under us,” Stringer said. “Coach Cooper came in, and he was as excited as I’ve ever seen him. He was so fired up, the next thing you know, he hauled off and knocked the blackboard out. He put a good dent in it, too.”

George said Cooper’s display was out of character for the head coach, which caused each of the players to reflect on the importance of The Game.

“That showed us how much he wanted to pull out the victory,” George said. “He’s usually laid back and calm. He’s not usually into emotional speeches, but that pumped us up.”

The Wolverines cut into the lead after halftime with an early field goal. They had another chance to add three points, but Ohio State special teamer Marlon Kerner blocked Remy Hamilton’s 32-yard attempt and kept the Buckeye lead at 12-6.

Ohio State kicker Josh Jackson extended the lead to 15-6. On the following Michigan possession, Fickell tipped a pass at the line of scrimmage and secured an interception at the OSU 16-yard line. Cooper’s offense cashed in seven more points when George carried five straight times. His final carry was a 2-yard touchdown that pushed the lead to 22-6.

Cooper defeated Michigan for the first time in seven tries, and it was the first Ohio State victory over Michigan since 1984. Buckeye fans hoped the win could turn the tides for the rivalry and that Cooper could lead the program to more in the future.

However, Cooper would lose the next three in a row to the Wolverines, with his successive win in 1998 — a 31-16 victory in Columbus. He finished with a record of 2-10-1 against Michigan.

In 2000, Cooper’s final season with the Buckeyes, Ohio State lost to Michigan, 38-26. Michigan junior quarterback Drew Henson went 14 for 25 passing for 303 yards and three touchdowns and added another score using his legs. Cooper was fired after the season. While he consistently fielded strong teams, his record against Michigan, including his failure to win in Ann Arbor was a significant factor in his dismissal.

It’s fair to assume that, had Cooper won more games against Michigan, he would have continued coaching at the university for some time. When he left, he was 63 years old and in his 23rd year coaching college football. While he never coached again after Ohio State, he continued living an active lifestyle that he still possesses today at 84.

Had his record flipped to 10-2-1, Cooper and his teams would have competed for several national titles during the 90s, including the 1995 season when Ohio State’s only regular-season loss came to the Wolverines. That team would eventually fall to No. 4 Tennessee, 20-14, in the Florida Citrus Bowl.

In 1996, the Wolverines handed the Buckeyes their only loss again, causing them to miss out on another championship. Ohio State still went to the Rose Bowl, where it defeated Arizona State, 20-17, in Pasadena, Calif., and finished with an 11-1 record. Still, the victory over the Sun Devils felt somewhat anti-climatic, knowing the Buckeyes lost their chance at a national title only weeks before.

If Cooper had defeated Michigan in those seasons, Ohio State fans might view the Tennessee native differently than they do now. His teams were always talented, but he couldn’t seem to beat the Wolverines when it mattered the most.

Would anything have changed for Ohio State had Cooper won those games?

Cooper might have continued coaching at the university longer, meaning Jim Tressel might not have entered the picture in 2001. If not Tressel, who would have replaced Cooper after he left?

If Tressel never coached at Ohio State, where would the program be now?

The beauty of a “What if…?” question is that we will never honestly know the answer. However, it is still entertaining to hypothesize about different realities if one or more events end with different outcomes. Join Buckeye Sports Bulletin in the Fan Forum to discuss theories: https://www.buckeyesports.com/boards/