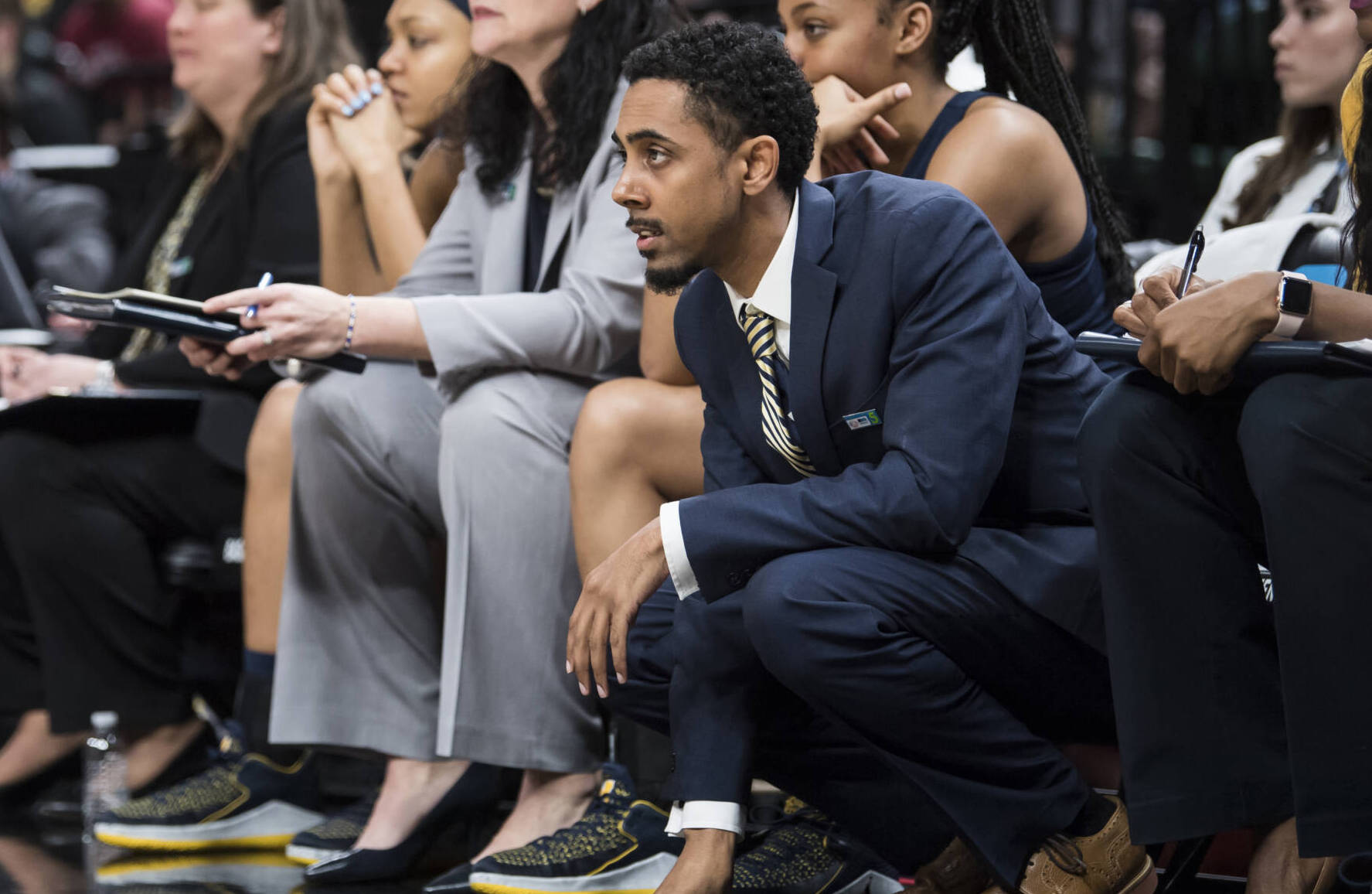 This is a story from the June print edition of Buckeye Sports Bulletin. For four free issues of the print edition, no card required, sign up at the link here: http://www.buckeyesports.com/subscribe-4issue-trial/

Ohio State women’s basketball made its first new hire of the offseason when Wes Brooks was added to the coaching staff on May 10. Back in the early 2000s as a student at West Virginia, it seemed unlikely that Brooks would be set on a path through women’s college basketball.

As an undergraduate student, Brooks had his first taste of coaching in any form when he was a student manager for the men’s team. There, he worked under then-West Virginia head coach John Beilein, who ultimately went on to coach for 12 years at Michigan and is now a senior advisor for player development with the NBA’s Detroit Pistons.

Brooks told Buckeye Sports Bulletin that he learned a lot about the game in his brief time under Beilein, especially in some key fundamentals on the offensive side of the ball.

Both Beilein and Brooks stayed at West Virginia through the 2006-07 season, but by that point, Brooks had already moved onto the women’s game. He moved from working under one legendary coach to another, with Mike Carey hiring Brooks as a graduate assistant in 2004.

Carey, who has been a women’s basketball head coach since 1988 and has been at West Virginia since 2001, brought Brooks on because of a surprise opening on his staff. Even though Brooks was fresh out of college as an undergrad and did not have any experience in the women’s game, he took on the opportunity and never looked back.

Eventually, Brooks became West Virginia’s director of operations before he left for an assistant role at Robert Morris a year later in 2008 to pursue his new coaching aspirations. Instead of backtracking into men’s basketball, Brooks took the experience under Carey and turned it into what is currently a 14-year career as an assistant coach.

“I’d already built a network of people on the women’s side,” Brooks said. “So I said, ‘Why go backwards? The women’s side is great.’ At that time, I knew the game was going to grow, but I didn’t know it was going to explode like it has exploded. For a career trajectory, you want to just continue to build; you don’t want to start over. So that’s how I started on the women’s side. People are like, ‘What’s the difference?’ I say, ‘Well, players are players. Players want to be coached, players want to be great.’ ”

Brooks spent one season at Robert Morris, then three at Texas Southern and four at North Texas before finding his way onto the coaching staff at Utah in 2015. After two seasons with the Utes, Brooks landed at Michigan, making it to the same university Beilein did, just 10 years later with four extra stops.

All those extra stops, according to Brooks, have made him a better coach, as he has been able to pick and choose the things he’s liked from various experiences to improve his craft. It has also helped him out as a recruiter to have experiences at programs in Pennsylvania, Texas, Utah and West Virginia.

“You grow with every experience, so you take something. You take what you don’t like, you take what you do like and it makes you a better person. But being able to see it from a variety of perspectives makes you stronger,” Brooks said. “What it has allowed me to do recruiting wise is build a national recruiting base. I can tap into California. I can tap into Texas and then build a worldwide recruiting base when you get to a school like Michigan. So now you can use all the resources, all the references, all the networks, all the people you have.

“And now you get to a place like Ohio State, and you hope that it can culminate and that’s why I came here, because you want to get to a Final Four and I think you can do it at a school like Ohio State.”

In his four seasons with the Wolverines, Brooks helped the team reach three NCAA tournaments, which would have been four if not for COVID-19 canceling the tournament in 2020. By his last year with the team, he had helped Michigan, under head coach Kim Barnes Arico, ascend to the program’s highest Associated Press top-25 ranking (No. 11).

Although football may reign supreme in the Ohio State-Michigan rivalry, Brooks said he thinks there is certainly some added animosity when the two women’s basketball programs meet on the court.

During his tenure at Michigan, Brooks also helped forward Naz Hillmon become the first conference player of the year and All-American in Michigan women’s basketball history.

Hillmon’s highlight performance was a 50-point, 16-rebound effort on the road against Ohio State on Jan. 21. Despite the heroics, the Buckeyes won 81-77. It was the second 50-point game Brooks had been on the sidelines for, with the other coming while he was at Utah.

On Feb. 25, 2017, Washington guard Kelsey Plum became the NCAA’s all-time leading scorer with a 57-point downpour against the Utes. It was the fifth-highest-scoring game in women’s Division I history at the time, and it was enough to take down Utah 84-77.

“I’ve never won a 50-point game, so I don’t like them,” Brooks said. “You can throw the 50-point games out because I’ve been a part of two now, and both times I’ve come out with a losing edge.”

A player like Hillmon represents something bigger for Brooks now that he is at Ohio State. Hillmon was a four-star prospect out of Gates Mills (Ohio) Gilmour Academy in 2018 but chose the Wolverines over the in-state Buckeyes. Fast-forward to last year, and Hillmon is one of the top players of the country putting up historic numbers against Ohio State instead of for it.

“Naz Hillmon is one of the reasons why you want to come to a place like Ohio State,” Brooks said. “That kid is from Cleveland, Ohio (Gates Mills is a Cleveland suburb). You want to keep her home and you don’t want her to go to Michigan. Now don’t get me wrong, Michigan is a good school academically and athletically, but if you can keep a kid like that at home, you want to keep her at home.”

That desire to improve Ohio State’s recruiting, specifically within the state, is of the utmost importance to Brooks, who emphasized the level of women’s basketball talent that is found within Ohio.

“For me it’s the No. 1 priority,” Brooks said. “Ohio is as rich with talent as Texas, California and Georgia in women’s basketball. Ohio was one of the best states in the country for women’s basketball, and so the ability to keep those kids in state in Ohio is very exciting.”

That level of desire and excitement from Brooks to make an impact was also clear to head coach Kevin McGuff, who has experience with Brooks back to when he was a West Virginia graduate assistant and McGuff was head coach at Xavier.

Brooks seems to fit into Ohio State’s coaching staff well with his experience, both with McGuff and in the Big Ten, but he was very nearly off to the SEC instead. On April 11, Brooks accepted an assistant coaching position at Mississippi State but ultimately rescinded that commitment in favor of one to the Buckeyes.

He said that decision came down to finding the right fit for him, as well as a lack of taking time to make a move on his end.

“You have to have patience, and one of those things was McGuff and I had talked and I really wanted to come to Ohio State. And it was one of those things where I’m very impatient,” Brooks said. “I think here at Ohio State, I fit Kevin, I fit the culture. We have the same traits, same philosophy. I was able to pull out. I said sorry about the time wasted. It was two weeks, which is better than six months or a year from now.”

McGuff also said that it came down to the timetables not quite matching up between Ohio State’s coaching search and Brooks’ initial hiring.

“So much of these things are about timing,” McGuff said. “When (former assistant coach) Simon (Harris) left and we’re trying to get the job posted, keep it open for the right time, just have a legit process that makes sense and where we have a great process to get the right person. (Mississippi State) was a little bit ahead of us in terms of when the job opened there, so I think he was just ready to make a different move and so he was a little bit like, ‘Hey, this is open. They want me.’ And then as he thought about it a little bit more, he kind of felt like this is the right spot for him.”

Now Brooks is at Ohio State and ready to make an impact, both on the floor and in the recruiting world. He said the emphasis on McGuff’s style of play on offense could make Ohio State “the most fun team in America to play for.”

His impact has already been felt in that aspect, with the Ohio State women’s basketball Twitter account posting “Fun Friday” clips of quick-moving, fast-paced offensive possessions from last season. The videos all say, “Play for the most fun offense in America,” at the bottom.

Although recruiting is at the top of his priorities, Brooks also has plenty of aspirations on the court for Ohio State, and he looks to the major programs at the university for reasons the Buckeyes are more than able to shoot for the stars.

“Get to a Final Four, get to that national championship game, because Ohio State is very capable of doing it.”