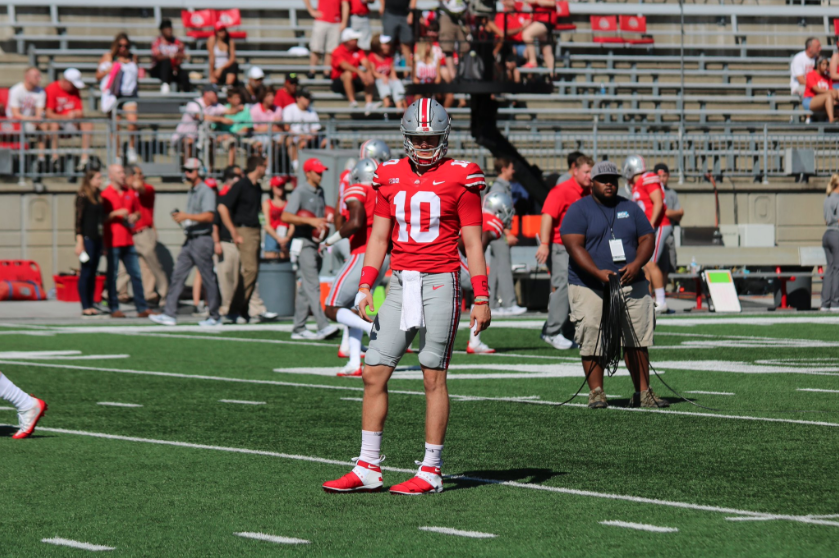 Buckeye Sports Bulletin began a series on May 22 in which we examine how players who have transferred out of the Ohio State football program during the Urban Meyer era have fared at their new landing spots, starting with the 2012 recruiting class, Meyer’s first at OSU.

We have already highlighted such student-athletes from the 2012, 2013 and 2014 recruiting periods.

The 2015 recruiting class Ohio State signed rivaled the 2012 haul in terms of those who eventually transferred. Ten players from the 2012 cycle left OSU while nine have done so from the 2015 batch.

What follows is a player-by-player breakdown of those who signed with Ohio State in the 2015 recruiting cycle and eventually transferred elsewhere, listed in alphabetical order.

Out of Woodbridge (Va.) Hylton, Burrell redshirted his first year on campus. He then played in all 13 games for the Buckeyes as a reserve in 2016, seeing extensive action in blowout wins vs. Bowling Green, Rutgers, Nebraska and Maryland.

In 2017, Burrell was a candidate to start at right guard but lost the competition to Branden Bowen. When Bowen broke his leg on Oct. 7 against Maryland, Burrell replaced him for the rest of the game. The next week at Nebraska, however, after battling for the spot, Demetrius Knox started at right guard instead of Burrell and did not surrender the position for the remainder of the year.

Burrell was vying for the center spot this spring but quickly fell behind Brady Taylor and Josh Myers. After the spring game, Meyer said Taylor heads into the summer as the team’s starting center. The head coach also pointed out the progress Myers made in the spring but did not mention Burrell.

Burrell announced on May 8 he was transferring to Sam Houston State. He will be able to play immediately at the FCS school.

The most noteworthy name on this list, Joe Burrow announced his transfer from Ohio State on May 8. Ten days later, he revealed that he was headed to LSU. He is immediately eligible as a graduate transfer with two years left.

A four-star prospect from The Plains (Ohio) Athens, Burrow spent his three years at OSU behind incumbent starter J.T. Barrett.

This spring, Burrow was in a three-way competition with third-year sophomore Dwayne Haskins and redshirt freshman Tate Martell. While no official announcement was made by Ohio State after spring camp, Burrow announced his intent to transfer two days after graduating.

Dean suffered three serious knee injuries before he even arrived in Columbus in January 2015 as an early enrollee. He was cleared to play football in the summer of 2015, but he was already out the OSU door and headed to Auburn by then.

Following a redshirted campaign in 2015, Dean rose up the depth chart to a starting cornerback job heading into the 2016 preseason but suffered a season-ending knee injury in fall camp.

Last fall, Dean played in all 14 games for the Tigers. He recorded 43 tackles, including 2½ tackles for loss, and broke up eight passes.

Feder, who announced in January he was transferring, received a degree in sports industry earlier this month. He unveiled on Sunday that he will continue his academic and football career at Kansas. Like Burrow, Feder will be able to play immediately as a graduate transfer while having two years of eligibility remaining.

Blessed to continue my academic and football career in the Big12 at the University of Kansas #RockChalk pic.twitter.com/g1YlR2JLD1

Feder spent much of his first two seasons at Ohio State dealing with a foot injury. His lone appearance in 2017 came during a 52-14 win over Illinois on Nov. 18 in Columbus.

The only other quarterback in Ohio State’s 2015 haul, Gibson inked his letter of intent to OSU as a four-star signal caller out of Plantation (Fla.) American Heritage.

Glover-Williams began his Ohio State career as a safety. The Canton (Ohio) McKinley product then switched to H-back before the 2017 season but never saw the field. He played in 20 games in 2015 and 2016, primarily on special teams.

Glover-Williams was dismissed from OSU last fall for undisclosed reasons. He later enrolled at Mississippi Gulf Coast Community College, the same junior college for which Gibson played last year. Glover-Williams, however, did not play football at MGCCC.

Former Canton McKinley and Ohio State athlete Eric Glover-Williams is headed to Slippery Rock to continue his career. Former 4-star that can play either side of the football. #THEROCK pic.twitter.com/BiWVdp86qB

A standout on the prep level at Valdosta, Ga., Norwood redshirted his first year at Ohio State in 2015. He played in 11 games in 2016, mainly on special teams, and was credited with eight tackles.

Following the 2016 campaign, Norwood transferred to Northwest Mississippi Community College, where he finished third on the team in 2017 with 71 tackles. He also had five pass breakups, three tackles for loss and one interception.

Norwood then signed with West Virginia’s 2018 recruiting class as the No. 35 overall junior college prospect and fourth-best cornerback in the 247Sorts composite. He will be a fourth-year junior this fall.

As is the case for many players on this list, Schmidt redshirted his first year at Ohio State. After one fall in Columbus, though, the former three-star prospect of Sioux Falls (S.D.) Roosevelt decided a change of scenery was needed.

Schmidt announced in May 2016 he was transferring to Cincinnati. He had to sit out the 2016 season due to NCAA transfer rules.

Similar to Ohio State, Grant spent just one season in the Queen City. He had a homecoming of sorts by transferring to South Dakota State last summer. He sat out the 2017 season, even though he transferred down from the FBS level because it was his second transfer.

A native of Avon, Ohio, Stump redshirted his first year at Ohio State in 2015. The following season, he played sparingly, catching one pass for 8 yards.

Stump then announced in March 2017 that he would be transferring to Vanderbilt. He had to sit out last fall due to NCAA transfer rules but will be eligible to play this coming season.