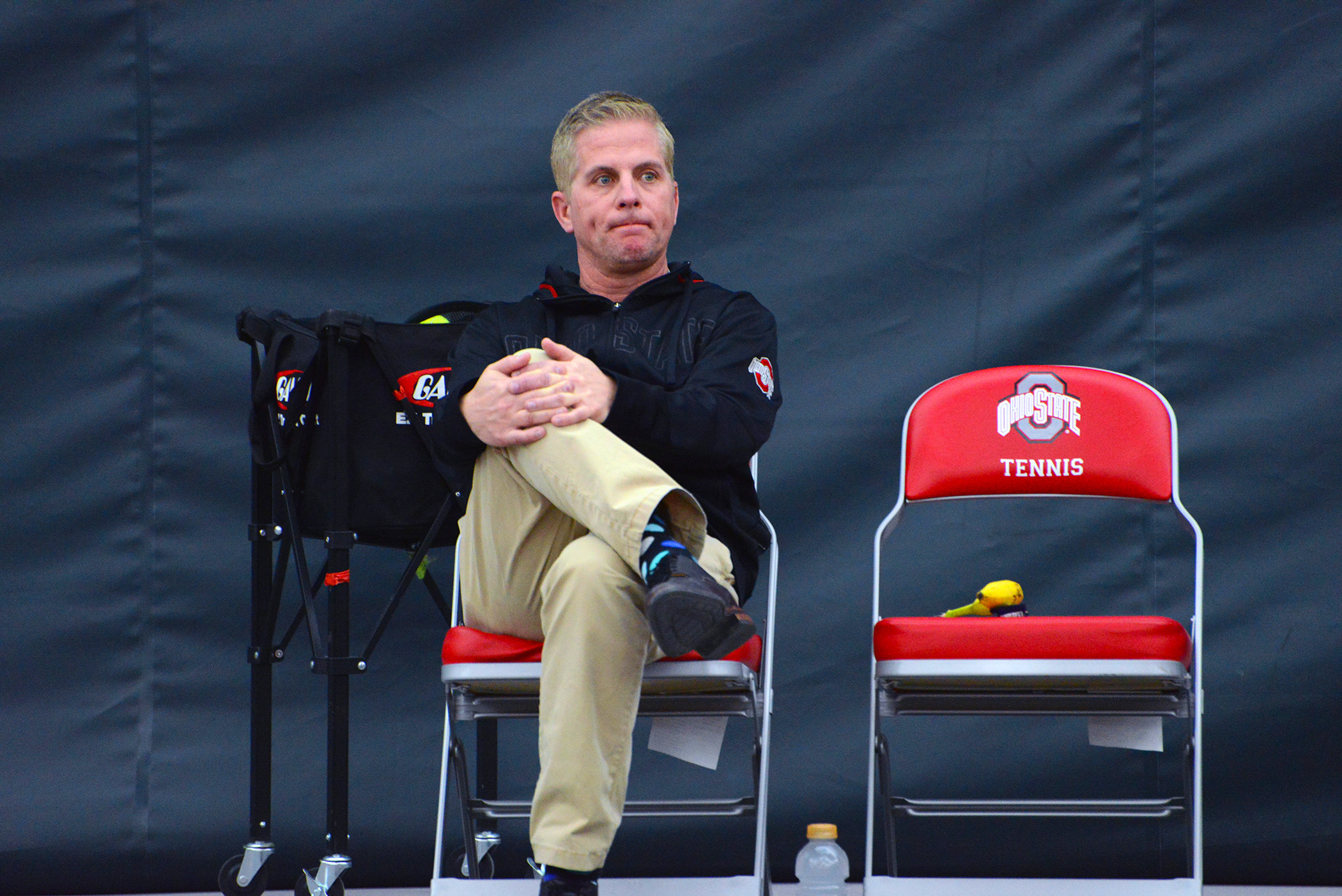 David Schilling still remembers the one match that he missed during his 21 years as an assistant men’s tennis coach at Ohio State. It was Sunday, April 10, 2005. Ohio State was set to face off with Penn State in Columbus, and for the first and only time in his tenure with the Buckeyes, Schilling, known by players and coaches as “Schills,” wasn’t in attendance.

“It was Penn State, I believe,” Schilling recounted to Buckeye Sports Bulletin as he looked back on his recently ended stint at Ohio State. “Yeah, Penn State. And it was maybe 17 years ago, 18 years ago. I guess it was pretty close, Ohio State won 4-3.

“I was a best man in a wedding of my childhood best friend that I really couldn’t miss. So I hustled back from Jamaica and moved on. I would have really felt bad if they weren’t able to pull that one out.”

“He made it to every match, was out there every match but one match in my entire career,” Ohio State men’s tennis coach Ty Tucker confirmed to BSB.

Every other match, all 690 of them, Schilling was there, serving as a crucial part of Tucker’s powerhouse program. He helped oversee the transformation of Ohio State’s tennis program into a national power under Tucker and was there for 600 wins (would have been 601 were it not for that Penn State match), 13 Big Ten tournament titles and a pair of indoor national titles.

He did so, for the final 18 of his 21 years in Columbus, as a volunteer assistant. In that time, Schilling made a point of being a constant for his players and fellow coaches.

“I’ve got a passion for college tennis, so it wasn’t really a matter of keeping up the streaks or whatever,” Schilling said. “It was just who I am and what I did. I felt it was important for me to have the kind of impact that I wanted to have on the program, and that there was great consistency and that the players always knew I was going to be there for them and that they could rely on me and not worry about, ‘Oh, is Schills going to be at this match or he’s going to be at that match?’

“So I built my schedule around Ohio State tennis. That was my priority during the falls, winters and springs.”

It makes sense that Schilling played a crucial role in Tucker’s program, given that Tucker personally recruited him to Ohio State in 1999 when he took over as the head coach in Columbus. Schilling was a rising star in Ohio tennis at the time. After a playing career at Denison ended in 1989, Schilling served as an assistant at the College of Wooster from 1989 to 1992 and then returned to his alma mater in 1992 through 1994, coaching under Peter Burling, who took over at Denison in 1990.

From there, Schilling was hired at Division III Kenyon College for his first head coaching role, a role he filled admirably. In six seasons, Schilling put up a school-best 87-36 record and won a North Coast Athletic Conference championship in 1995. However, despite a résumé that could have certainly yielded a bigger head coaching gig, Schilling took Tucker up on his offer and became an assistant at Ohio State for three years before moving into a volunteer role to free up room for another staff assistant.

“Dave is a good guy,” Tucker told BSB. “I mean he started off as the assistant coach. For the first two years he was the assistant and I needed some more help with recruiting, and he was doing his own thing, because back in the day, 21 years ago, assistant coaching salaries were next to nothing. So I needed more help. Since it was a full-time job, it was just more of a benefit for him to be the volunteer assistant.”

As the years went on and wins became more and more common, Schilling and Tucker developed a coaching rapport that elevated Ohio State’s program. Several full-time assistants rolled through the program, including Justin Kronauge, a former player under the two who was hired as an assistant in 2017, but Schilling always served as a constant.

“Obviously, tennis is a nonrevenue sport, but our drive to succeed was second to none, and our passion for Ohio State was second to none,” Tucker said of their relationship in a letter to Schilling posted on Ohio State’s website. “We spent 500 nights in the same hotel room breaking down scouting reports, videos, strengths and weaknesses, and ripping each other relentlessly.”

The two experienced some of the most iconic matches in school history, including those two indoor titles, though Schilling remembers the early success they had even more fondly.

“The early wins were probably a little bit sweeter to some degree because so much was expected of us, that a lot of the wins over the past 10 years have kind of been relieving wins, wins of relief,” Schilling said.

“But I will say that they’re just moments. They’re great wins. I remember Justin Kronauge clinching in 2009 against UCLA in the semifinals, the NCAA, I mean that one will stand out forever. Some great wins over Illinois in the Big Ten finals, some incredible moments there. Going back to our first year, I remember beating South Alabama who was No. 28 or No. 32 in the country. We were an upstart program, beating South Alabama in the old West rec building that we played in – that was special.

“Ty and I both remember beating Indiana State one time, maybe year No. 2, when Brian Boland, the legendary UVA coach who’s now at Baylor, was coaching at Indiana State. We went in there and it was two top-20 teams, and we had a really good win in there. So there’s so many special wins and little snapshot moments that were incredible.”

After all that time in Columbus, Schilling made it very clear that he wasn’t interested in the traditional coaching career path. As he explained it to Buckeye Sports Bulletin, there was only one job in the country that would draw his interest: Denison, and given that Schilling’s one-time employer, Burling, was still in charge after a nearly three-decade-long tenure, it seemed unlikely that Schilling would have any reason to leave.

“I always joked that one of the only jobs that I would ever leave Ohio State for, or the only job I would leave Ohio State for was Denison,” Schilling said. “I’m a Denison alumnus, so having gone there and then coming back and coaching there while I was in graduate school, it’s always held a special place in my heart. Fortunately, Peter had a long career and so the job has never really been opened before.”

In March, that changed. Burling announced his retirement on March 24, marking the end of 30 years in charge. Schilling still wasn’t planning on leaving Columbus, but he felt he had to do his due diligence.

“When he retired this spring and the job opened up, I thought I should probably look into it and see what all was going on,” Schilling explained. “I had lost touch on a day-to-day basis so to speak, and the more I researched it, the more attractive the position had gotten, but it was a very difficult decision.

“I mean, to be honest with you, I hadn’t planned on leaving Ohio State and figured I would just retire from Ohio State, but it did kind of catch me off guard when it opened up.”

After conversations with Tucker and Burling, Schilling made the decision that he never expected to make. On May 6, he was announced as Burling’s successor.

“We are thrilled to welcome David Schilling back home to Denison University,” said director of athletics Nan Carney-DeBord in a university statement. “I also had the opportunity to return to my alma mater after a career in coaching, and there is something so special about coming home and being 100 percent invested in a community that you love. I have a feeling that David’s love of Denison combined with his coaching prowess will mesh perfectly with our model of competitive excellence.”

Those conversations with Tucker and Burling played a crucial role in helping Schilling make the move. Tucker told BSB that he thought the time was right, and Schilling described Burling as very helpful.

“I had regular communications with (Burling) prior to taking the job, and he had an incredible career at Denison for more than 30 years,” Schilling said. “We talked a couple of times a year, and then obviously he’s been very helpful and in the onboarding after the job, helping me get to know the lay of the land and the kids and everything from scheduling to budgeting and that sort of thing. He’s been incredibly helpful.”

While Schilling has moved on from Ohio State and is looking ahead to taking over the program that he played for 31 years ago, he told BSB that the time he spent at Ohio State will stay with him forever, and he sees a bright future in Columbus even past his departure.

“I came in, I was the head coach at Kenyon College prior to coming to Ohio State and I came in when Ty took over and the program, let’s just say it wasn’t where it is today. So, there was a fair amount of work to do and Ty gave me the opportunity, and I’m completely indebted to him for that opportunity, for him allowing me to coach the way that I coach. I’ve learned so much from him, as well as the other coaches that have come through. Justin Kronauge who played for us, I’ve learned a ton from him as well.

“It’s just such a unique program. The job Ty has done is a first-ballot Hall of Fame coaching career. It’s not like he came into a program that had a ton of success prior. He’s built everything that’s involved with Ohio State, from the program, to the culture, to the facilities – multiple facilities. I think his legacy will show now in three brand-new facilities. It’s a mind-boggling career that Ty’s had to date, and he’s not close to done, I don’t think.”

With all that Ohio State gave to Schilling, it seems that he gave just as much back. In his letter to Schilling, Tucker called him “Ohio State’s hidden gem,” and one of the school’s “best kept secrets.” In his conversation with BSB, Tucker was effusive in his praise of the man he’s spent nearly his entire career alongside.

“David Schilling is a wonderful coach who is going to do great things.”