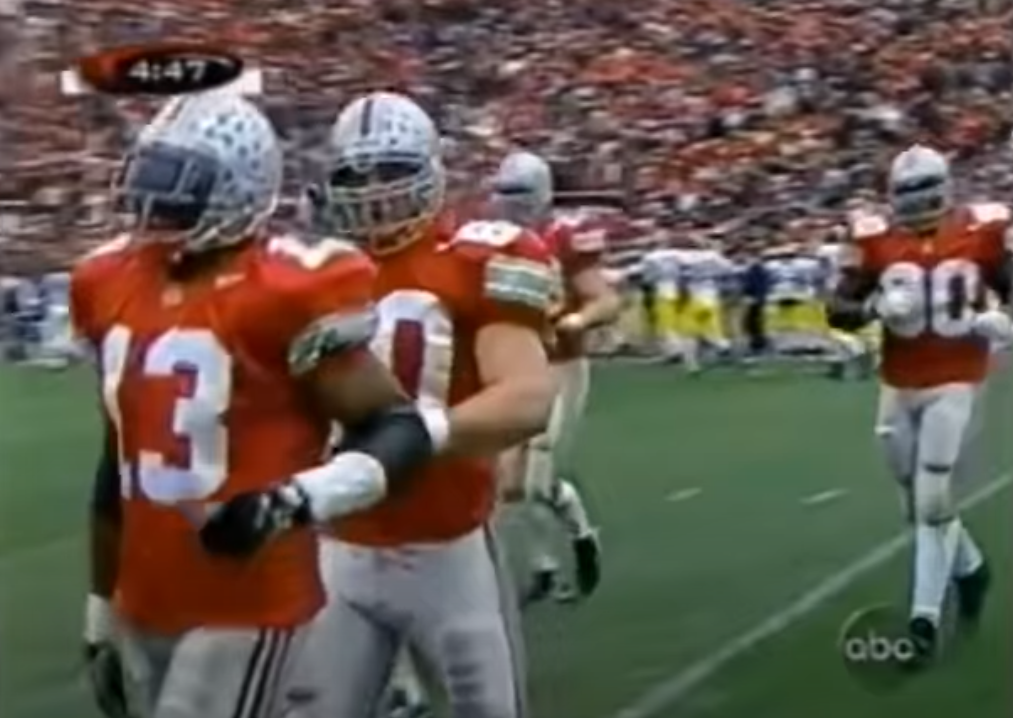 With the return of football up in the air, now serves as a perfect time for reflection on the history of football, and the strategic evolution of the game. To do that, the film study will be spending the offseason looking back at classic Ohio State games. Today’s film study revolves around Ohio State’s 1998 victory over Michigan, 31-16. Video is from this cut-up. Last week’s film study can be found here.

In last week’s film study, which took a look at the Rose Bowl following the 1996 season, a large part of the analysis centered around the idea of talent, and of succeeding by putting that talent in a position to thrive by avoiding over-complicated things or forcing players into a system that doesn’t suit them. In that game, Ohio State was largely unable to stay out of the way of its own offense, and while the Buckeyes still won, they do so with one hand tied behind their back because of poor coaching.

For much of the John Cooper era, that was a theme. He, like many other coaches in the 90s, understood the need for elite talent to compete, but unlike the coaches of the era that won titles, Cooper could never quite piece together a system that allowed the talent he had to thrive. He got close on several occasions, putting an elite defense on the field in 1993, 1996 and 1997, but in those seasons, the other side of the ball never quite caught up, and when faced with top talent on the other sideline, OSU faltered.

In 1995 and 1998, neither unit struggled. Led by Eddie George, the 1995 offense averaged 36.5 points per game, No. 7 in the country, while the defense actually trailed slightly, allowing 16.9 points a contest, good enough for No. 10 nationally. Three seasons later, quarterback Joe Germaine thrived in the most lethal passing attack in school history, surrounded by an offense that combined to average 35.8 points a game, No. 12 in the country. Even better in 1998 was the defense, allowing just 12 points per game, good for No. 2 nationally and the second-lowest average of any Cooper defense, trailing the 1996 squad which allowed 10.9 PPG.

While both of those teams faltered, the ’95 version against the usual bane of Cooper’s tenure from Ann Arbor and ’98 against an upstart coach named Nick Saban at Michigan State, they both still served as the ideal versions of Cooper’s vision. They excelled on both sides of the ball because of their elite talent, and save for one game in each season, they were able to roll through opponents while operating in a scheme that suited the talent of the roster and stayed out of the way. The staff still faltered with the spotlight on them. These teams could only be stopped by a poorly timed shot directly into their own feet.

Usually, that shot came against the Wolverines, with Ohio State’s staff unloading clip after clip into their title chances every time they saw the winged helmets on the opposing sideline. In 1993, 1995, 1996 and 1997, Ohio State entered its matchup with Michigan with an average ranking of No. 3.25, and lost all four games. The Buckeyes went 40-1-1 in regular season games those four seasons against teams not named Michigan, and 0-4 against Michigan.

Now, a large part of that can be chalked up to the fact that Michigan was one of the few teams that could touch Ohio State from a talent perspective. The Wolverines weren’t quite as loaded as Ohio State was, but they were physical and talented enough to challenge the Buckeyes. Rather than taking what Michigan gave them, Ohio State’s staff liked to respond to this sort of challenge by slamming their heads into the wall for four quarters and hoping that Michigan would just give up.

In 1998, after what felt like decades of this sort of torture from their rivals to the North, Ohio State finally did what it should have been doing all of those years, and responded to Michigan’s challenge with a challenge of its own. The Buckeyes trusted their talent, took what was there on offense, and announced firmly on defense that if the Wolverines wanted to win, they would have to do it with the short passing game.

From the very early stages of the game, including this on the first drive, Ohio State’s message to Michigan was very clear. The Buckeyes entered the game touting one of the best rushing defenses in America, allowing just 69.8 rushing yards a game on the season, roughly 2.2 yards per carry. With two cornerbacks in man on the outside on just about every play of the game, while a combination of linebacker and safety managed the man coverage responsibilities for tight ends and halfbacks, the Buckeyes always looked to free up at least or two linebackers to play the run first, before dropping into an intermediate zone if quarterback Tom Brady looked to pass.

For the most part, the linebacker most responsible for that was standout middle linebacker Andy Katzenmoyer, who spent the day patrolling the middle of the field, taking his first step in to make Michigan think twice about running the football. He does just that here, as does safety Damon Moore, playing in the box in anticipation of the run. Moore and linebacker Na’il Diggs take their first steps diagonally in response to the pitch outside, while Katzenmoyer brings up the rear in the case of a cutback. Moore gets there first, forces halfback Clarence Williams back inside, where he’s quickly swarmed.

Selling out like this to stop the run, on one of the first plays of the game, is telling of two parts of Ohio State’s game plan. Firstly, the Buckeyes were confident that they could seal up Williams and halfback Anthony Thomas. Secondly, they were even more confident that Michigan wouldn’t beat them in the air.

It’s easy to feel that confidence with Antoine Winfield and Ahmed Plummer at cornerback, backed by Moore and Nate Clements. Ohio State was comfortable putting those players in single coverage with Michigan’s wide receivers, and for the most part, it paid off.

There were openings underneath all day, like this one, but this came on a third and long. Dump-offs aren’t going to convert in a spot like that. The Buckeyes rush just four off the line, dropping three linebackers and the four defensive backs into a base Cover 4 look, daring Michigan to throw down the field and test those safeties, while keeping the intermediate middle covered. The flanks are left open, as the seven players dropping in coverage are expected to be able to cover the ground quick enough to prevent a pass like this from becoming a 10-yard gain. It works here, and Michigan punts.

Helped by that early dominance against the rushing attack, and a 14-0 start from the offense, Ohio State’s defense really started to groove as the game went on, with Michigan being forced into a pass-heavy game plan.

“I’m not sure how much they tried to run the ball,” said Ohio State’s defensive coordinator, Fred Pagac. “But this is something you dream about as a defensive coach. We got up early and that put them in a bad situation. They felt like they had to throw the ball.”

With the Wolverines pushing to make something happen, Ohio State flipped the usual script, and got more aggressive, rather than tightening up. The Buckeyes again leave the flanks open, blitzing Moore off the edge and Katzenmoyer up the middle on first-and 10. The five-man rush on the Michigan offensive line, complete with a stunt that drags a guard in to handle Katzenmoyer, collapsing the pocket further and sucking in the halfback, leaves a wide open lane for Moore to take almost completely uncovered. The flanks being open only matter when Brady has a second to breathe, and he didn’t have that here.

It wasn’t until the final drive of the first half that Michigan found a weakness in the Buckeye defense, and did what it probably should have done from the start, switching into a shotgun look and attacking the Buckeyes behind the linebackers but under the safeties. The fact that Michigan didn’t realize this until there was a minute left in the half makes a lot more sense when you realize who was calling the shots for the Wolverine offense.

Bucking tradition again, after Michigan found the spark at the end of the first half to cut into the lead, Ohio State adjusted to what the Wolverines had shown without over-adjusting, keeping an emphasis on stopping the run while introducing something closer to a dime look to counter those passes across the middle.

The adaptation forced Michigan right back into the zone that it didn’t want to be in, forced to either accept that the Buckeyes were better and resort to passing underneath, or to continue to throw and run right into the teeth of the defense, hoping to get lucky. In some cases, that worked pretty well, with wide receiver Tai Streets pulling down a couple nice grabs in man coverage to keep the Wolverine offense alive. Here, Michigan wasn’t so lucky, again looking to return to that well 15 yards down the field, right across the middle.

Ohio State drops into a heavy coverage look, dropping all but the four linemen into a five-under, two-over Cover 2 shell and completely taking away that threat of a post route, while nearly forcing an interception. The Buckeyes rode looks like this one through almost all of the second half, and Michigan never responded. The Wolverines generated the occasional big play, and had lots of success with throwing to the flanks and picking up five or six yards, but it was almost as though they were simply too proud to play like that. In this rivalry, losing while playing your game rather than winning playing the opponent’s seems to be an easy decision for head coaches to make. Admitting that Ohio State had the talent advantage was more painful for Lloyd Carr than being decimated by that talent advantage.

Then, to tie it all together, with just over six minutes to play, Michigan went to the short pass, the only thing that had worked consistently throughout the game, and despite loudly announcing all game that they didn’t care about the underneath pass, the Buckeye defense still managed to make a play on one.

Gary Berry jumps the pass and it flutters right into Plummer’s hands. Michigan waited too long to take what Ohio State was giving it, because Ohio State no longer needed to give the Wolverines anything. After being given this exact same okie-doke by Michigan for years and refusing to compromise the game plan even in the slightest until it was too late, resulting in four of the most crushing losses in program history, Ohio State was finally the ones holding out the ball for Michigan, daring them to kick it, and then pulling it away right as the Wolverines finally accepted their fate.

“We didn’t stand back and wait for things to happen,” Cooper said. “We came out smoking from the get-go. We threw the ball down the field. We also had to run it a little bit, and Michael’s play helped break it open.

“I think the approach we took really paid off. We didn’t play tight or not to lose. We played to win.”

Those quotes are almost cruel, because it’s obvious that Cooper understood exactly what had gone wrong all of those years. In 1998, he finally figured out how to exorcise those demons.