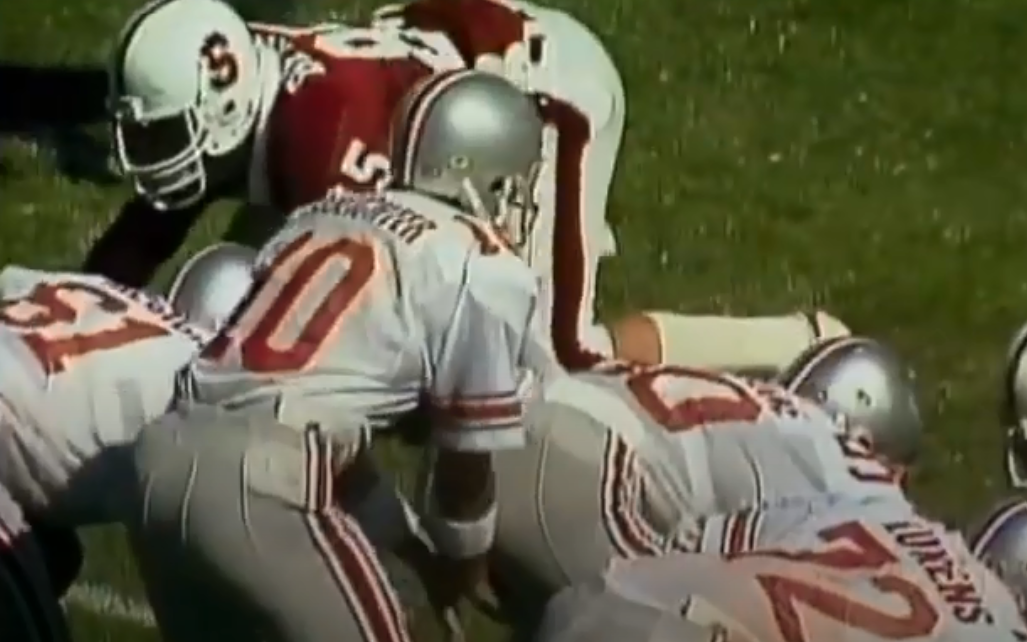 With the return of football up in the air, now serves as a perfect time for reflection on the history of football, and the strategic evolution of the game. To do that, the film study will be spending the offseason looking back at classic Ohio State games. Today’s film study revolves around Ohio State’s 1981 matchup with Stanford, a 24-19 win for the Buckeyes. There aren’t any Earle Bruce offensive playbooks online, so we’re again stuck with the tape without a supplementary playbook. Video is from this cut-up. Last week’s film study can be found here.

Earle Bruce didn’t have any interest in radical changes early in his tenure as Ohio State’s head coach. It’s easy to understand why. He had to fill the shoes of Woody Hayes, the man who had roamed Ohio State’s sidelines for 28 seasons, and who had his time ended abruptly in Columbus after punching a player during a game. That part is crucial to remember when understanding Bruce’s time in Columbus. His predecessor did not end on a sharp decline in results – though those his last few teams were showing some signs of being behind the times, a frequent issue for Hayes – like many great tenures do.

Because of that, Bruce, who had made a name for himself at Iowa State as a rebuilder, was without anything to rebuild. Ohio State’s program was built, and just needed a steady hand, especially in the tumultuous months that followed Hayes’ ouster. Dramatic change was not the goal, nor was it welcome among a program and fan base that had become accustomed to winning, and certainly didn’t want to push too hard and disrupt that.

On top of that, and perhaps even more importantly, Hayes brought Bruce into the college football world as an assistant, taught him everything there was to know about his offense, and instilled his ideals into what was, at the time, a young Bruce. A change in ideology, especially on offense, wouldn’t just upset the empire that Bruce had been named the leader of – it would betray essentially everything that his mentor, the man he was replacing, had taught him.

So, Bruce stuck to what he knew in Columbus. He kept George Chaump’s I-formation even with Chaump gone, pounded the rock, and looked to lock teams down with hard-nosed defense. In year one, the Buckeyes ran the ball 649 times to just 222 passes, a 2.9:1 ratio of run to pass. A year prior, still under Hayes, OSU ran 732 times and passed 190 times, a 3.8:1 ratio of run to pass, that was influenced by the presence of a freshman quarterback.

However, as Bruce became more entrenched, and started to add his own recruits into the program, he started shifting away from the ground-and-pound style that Hayes had relied on so heavily. Ohio State was still a running team, with a 2.5:1 run pass ratio in 1980, but the passing numbers were increasing. By Bruce’s third year, the Buckeyes had just a 1.5:1 run to pass ratio. Part of that was Bruce naturally moving toward a style that he was far more comfortable with than Hayes ever was. Bruce preferred the run, but he didn’t hate the pass as Hayes did, and he was able to see the writing on the wall regarding the rise of the pass in the early 80s.

Part of it, however, was the man that Bruce had throwing the passes. That freshman quarterback that helped lead a 3.8:1 ratio in 1978 had developed into a perennial Heisman contender, and one of the best passers in the country. Bruce would have been crazy not to take advantage of the talent that senior Art Schlichter brought to the table.

Schlichter didn’t have a massive arm, nor was he the most accurate passer in the nation, but he had a tremendous understanding of opposing defenses, a knack for slight of hand, and the ability to get the ball out quickly if he saw even a little bit of an opening. Ohio State’s passing concepts in the early 80s were still underdeveloped at best, but they worked with what Schlichter was good at.

Now, that didn’t mean that the rushing attack was gone from Ohio State’s offense. Bruce still loved to run from the I-form, just as Hayes had throughout the 70s, and did so frequently with converted fullback Tim Spencer. The concepts hadn’t seen many alterations, either.

This first quarter toss to Spencer serves as a great example. Ohio State overloads the short side of the field with a tight end on the edge and wideout on the perimeter, forcing the defense to play in a phone booth. That would usually benefit the defense, but Ohio State’s offensive line was so tough that the Buckeyes could just run right through the Stanford defense, which was the whole point of getting them all onto that side of the field. The threat of a counter, or of Schlichter keeping the ball is enough to hold the defense in place for a beat, giving the pulling lineman time to get around the edge and help lead the way.

From there, it’s just about winning matchups, which Ohio State’s line did very well. The tight end seals the edge, the wideout helps close off the outside, with some assistance from that pulling lineman, while the fullback helps the tight end seal the inside off, creating a nice lane for Spencer to run through. This is textbook Ohio State football right out of the 70s, and Bruce was still very much using it in the rushing attack into the 80s.

Bruce also liked to bust out some series playcalling, which was once the primary way to call plays but lost some steam as playbooks became more complicated. Basically, series playcalling is using plays that have the same base to confuse and misdirect the defense. Bruce didn’t do it with every look, because Ohio State had a significantly larger playbook in the 80s than it did when series play calling was the norm, but he did like to have it as a part of his attack, integrated both into the running game and the play-action attack.

You can see what that looks like here. On the first play, Ohio State brings wideout Gary Williams in motion behind the halfback and fakes a handoff to him, in hopes of holding the defense back from attacking the interior for just a second, where the ball is actually going. It doesn’t create big results, but it doesn’t really need to, because it sets up a much bigger gain on the very next play.

The motion remains, but the fake goes to the halfback, with Williams actually taking the ball while following two pulling guards to the outside. The defense bites on the fake to the inside, the edge defenders takes a hard step in the wrong direction, and those pulling linemen are able to spring Williams for a first down.

Then, to end the series just a few plays later, Ohio State shows off the play action version. Schlichter fakes both handoffs, hoping to lock those linebackers into the box while a wide receiver breaks into the soft spot of the defense where those linebackers are supposed to be on a passing play. A missed blitz pickup nearly ends the play, but Schlichter is able to avoid the rush and find his wideout in that vacated space for a big gain, entirely set up by the two plays that preceded it. Those linebackers don’t bite this hard if it wasn’t for the beginning of the series. This is too rigid a style of play calling to do with any sort of regularity in a modern offense, but in a pinch, it can really punish a defense.

This was how a lot of Ohio State’s passing game worked with Schlichter  at the helm. His arm wasn’t strong enough to gash defenses in the way that some of the game’s best quarterbacks were doing at the time, but he was so good at manipulating and reading defenses, it made these play actions almost impossible to stop. Plays like this one, with the handoff fake freezing those linebackers again to create space across the middle, served as the best way for Ohio State to move the ball in big chunks. Schlichter did not often miss openings on plays like this if he had enough time to work with.

That, along with a few new formations like the pro-set, designed as an evolution of the T-formation, is really what separated these teams from the late-stage Hayes teams. Schlichter’s ability to tear apart defenses with his intelligence allowed Bruce to open up the passing game for the first time in school history, and led to an increased focus on recruiting guys that could try to replicate Schlichter’s success.

It also meant that for the first time in school history, with the game on the line, Ohio State would throw out a play like this.

This was on a crucial third-and-short in the fourth quarter, holding onto a 24-19 lead with John Elway on the other sideline waiting to get the ball back. A quick out to the halfback out of the backfield, from the pro set. It didn’t quite seal the game, because Stanford would still get the ball back, only to come up short after a fumble, but it was still a passing play in a high-pressure moment, essentially unheard of at Ohio State until this point.

Obviously, there was no reinventing of the wheel in the passing game in Columbus under Bruce, but for Ohio State to be doing this at all, after the Hayes era, should be considered a minor miracle. The Schlichter era can be looked back on as the first step that Ohio State took toward what is now one of the most lethal passing attacks in America. Bruce and Schlichter set the framework for Ohio State’s rapid evolution, which has only grown faster as the years move past.