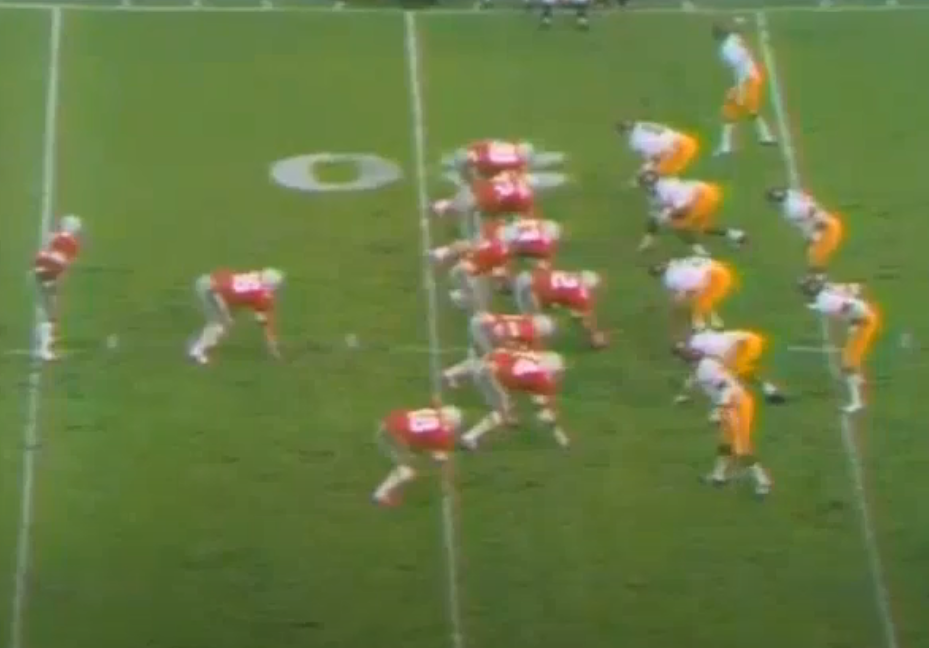 With the return of football up in the air, now serves as a perfect time for reflection on the history of football, and the strategic evolution of the game. To do that, the film study will be spending the offseason looking back at classic Ohio State games. Today’s film study revolves around the 1974 Rose Bowl, a 42-21 win for Ohio State over USC. Unfortunately, there are no George Chaump playbook readily available online, so we’re rolling just off of the film this week. Also unfortunate: there are two copies of this game on YouTube. One only has the second half, one appears to have the whole game, but the former looks quite a bit better than the latter. We’re going to go with the the higher definition option.

George Chaump isn’t as well known as many of the players that he coached, or the head coach that he worked under, but his impact on Ohio State’s football program may be just as significant as anyone to ever come through Columbus. Chaump pulled Woody Hayes back from the brink in 1968 and saved his job, adding modern flavor to an offense that, while talented, had hit the ceiling of what was possible in Hayes’ T-formation.

After Ohio State won a title following Chaump’s offensive blueprint, the Pennsylvania high school coaching legend was given the chance to fully implement his system – a run-heavy I-formation look that served as the perfect evolution for Ohio State, a program with as strong a running tradition as any school in America at the time. The days of several elite rushers coming out of the backfield were gone, but the days of dominant ground performances were just getting started under Chaump.

A lot of that came from Chaump’s system, which was far less intricate than Hayes’ T-formation attack but quite a bit more diverse, and, more importantly, a whole lot better suited to handle defenses that had evolved well past the point of being troubled by an offense as static as Hayes’ T-formation. Chaump was firmly in the growing group of coaches that swore by the I-formation, which, as we talked about in the last film study, rose to power in large part because of Ohio State’s West Coast rival in the 60s and 70s: USC, and its head coach, John McKay.

Chaump’s version was not dissimilar from McKay’s, though Ohio State did still view the passing game largely as a scourge on the sport, while USC had fully integrated it into its offense, as shown by quarterback Pat Haden’s 247 attempts in 1973. Cornelius Greene, inversely, threw just 46 times for the Buckeyes in the 1973 season. The system may have changed, but Hayes was still Hayes, and he still had no interest in passing more than was absolutely necessary.

While Chaump’s system played a major role in the evolution of Ohio State’s offense from a plodding, grind-it-out, three yards and a cloud of dust monolith into something that resembled a modern offense, he was certainly helped by the personnel at his disposal. The I-formation is quite a bit easier to install when you have an elite offensive line and even better running back to plug into it, because Archie Griffin is going to make any offensive coordinator look like a genius as long as they give him the ball and get out of his way.

Chaump and Hayes did just that, largely because they understood exactly what they had in Griffin.

He won the starting running back job as a freshman, almost completely unheard of at the time, and served as the deep back in Chaump’s I-form admirably for such a young player, carrying 159 yards for 867 yards. In 1973, Chaump fed the hot hand, Griffin carried 247 times for 1,557 yards, and Ohio State finished its regular season without a loss (though a draw with Michigan did hold the Buckeyes back from a national title). After a tremendously controversial vote, Ohio State was picked for the Rose Bowl, to face off, again, with those pesky Trojans.

Even without an O.J. Simpson, Marcus Allen or Ricky Bell caliber bell-cow at halfback, USC was still very good in 1973, and was certainly talented enough to make Ohio State work for what would have been its first Rose Bowl win since that 1968 matchup. To topple to Trojans, OSU planned to keep it simple, and stick with what had worked all season long: that unstoppable ball carrier from Eastmoor, following closely behind fullbacks Bruce Elia and Pete Johnson, and quarterback Cornelius Greene.

USC, however, had other ideas. The Trojans made it their primary goal to force someone other than Griffin to beat them, and were able to keep him bottled up for most of the first three quarters. With USC keyed in on the star, Ohio State utilized its other talent through much of this game, like on this run for Johnson.

Johnson looks more like a very fast refrigerator than he does a halfback, and the Buckeyes loved to utilize that massive frame in short yardage situations like this one. This is where Hayes’ T-formation still played a role, and where those bruising backs that Ohio State had become known for could still do their damage. This is a T-formation staple, the fullback buck, with the playside halfback serving as a lead blocker while the backside halfback (Griffin, in this case) works as a decoy to the outside, to hold that edge rusher in place, as he does here.

Following behind that lead blocker and a seven-man line thanks to a tight end on either side, Johnson just has to hit the hole with enough speed and power that he can fall forward. This is only designed to get a couple yards, but no one told Johnson that, because he barrels through the heart of the USC defense with a ton of force and creates a big play that Ohio State wasn’t expecting, a rarity in this offense.

To generate some more offense without being able to ride Griffin, Chaump turned, as well, to some nifty misdirection and series playcalling. On the first play OSU dials up a quick sweep handoff to wideout Brian Baschnagel, with a fake to the fullback and Griffin following closely behind, in an attempt to move the linebackers into the A gap to the left of the center, where the fullback would be able to take on one in a block, while Baschnagel dips into the A gap on the right side, which would have just been voided by that backside linebacker.

That part goes to plan, and the linebackers are moved out of the gap, but the pulling tackle’s block is poor, and USC’s tackle is able to blow up the gap and give the rest of his defense time to recover and find the ball to prevent a big gain.

Even without the big gain, that play serves a purpose, because it sets this up on the next down. Ohio State shows off that same sweep look, but Greene flashes some nifty misdirection on the fake handoff, while Elia and tight end Fred Pagac slips into the secondary. With the linebackers taking a step forward to start the play because of that play fake, Pagac is wide open in between the levels of the defense for an easy completion and solid gain. A lot of Ohio State’s passing attack came on well-designed play-action looks like this one.

The Buckeyes showed off a similar look to open the next drive, and while the linebackers weren’t fooled into opening up that space again, they overreacted this time, giving Greene, a gifted athlete in his own right, tons of open space to work with. That’s two successful plays, happening in two wildly different ways, based entirely off of that first look that went for just a few yards. Despite the lack of immediate success, USC showed a willingness to overcommit on that first play, and Chaump was more than happy to take advantage.

That wasn’t the only play action look that Ohio State had success with either. On this play, Greene flashes that handoff magic again, hiding the ball perfectly as he enters his drop and fakes to Griffin, dragging the entire middle of the defense in and clearing room deep for another big pass to Pagac. Greene tosses a beautiful ball, and Pagac is able to take advantage of single coverage with a much smaller defender. Another big play off the play action for the Buckeyes, and another big play created by the threat of Griffin out of the backfield.

All of that success with everyone that isn’t Griffin did a number on USC’s defense, because by the fourth quarter, it had stopped falling for the fakes, and was dedicated to stopping everyone but Griffin. Unfortunately for the Trojans, that gave Ohio State the entire fourth quarter to finally feed a well-rested Griffin, and he certainly wasn’t one to squander that kind of opportunity, breaking off two big runs to put the finishing touches on a 42-21 win for Ohio State and a No. 2 finish in the final AP Poll.

The first saw Griffin on a simple dive, following behind his fullback as the lead blocker. Elia throws a great block to take care of the linebacker trying to fill the gap, and Griffin just uses his elite speed and burst to gash the defense and move Ohio State right onto the edge of the goal line.

The second is even more impressive, and it truly locked up the game for the Buckeyes. Griffin runs off tackle, following the fullback again, as the entire line blocks down away from the play side, leaving the end unblocked for Elia to deal with. he does, and the seal that the line created inside gives Griffin a beautiful lane into the second level, following behind two downfield blockers on the perimeter. He hits that gap as hard as you’ll ever see anyone hit anything, accelerates into the secondary, and then does what very few running backs will ever be able to do, manipulating the defense and leading his own blockers all the way to the end zone.

After three quarters of play action, misdirection, and a healthy dose of Greene, Johnson and Elia, this kind of run was exactly what Ohio State needed to break USC’s back, and Griffin was exactly the player to deliver it, just as he did at seemingly every chance during his illustrious career in Columbus. For Ohio State’s staff, the key was all about knowing when to unleash him, and in the 1974 Rose Bowl, they couldn’t have possibly timed it any better.

Here’s Cornelius Greene pulling off a beautiful goal line option keeper and then celebrating like a goofball.