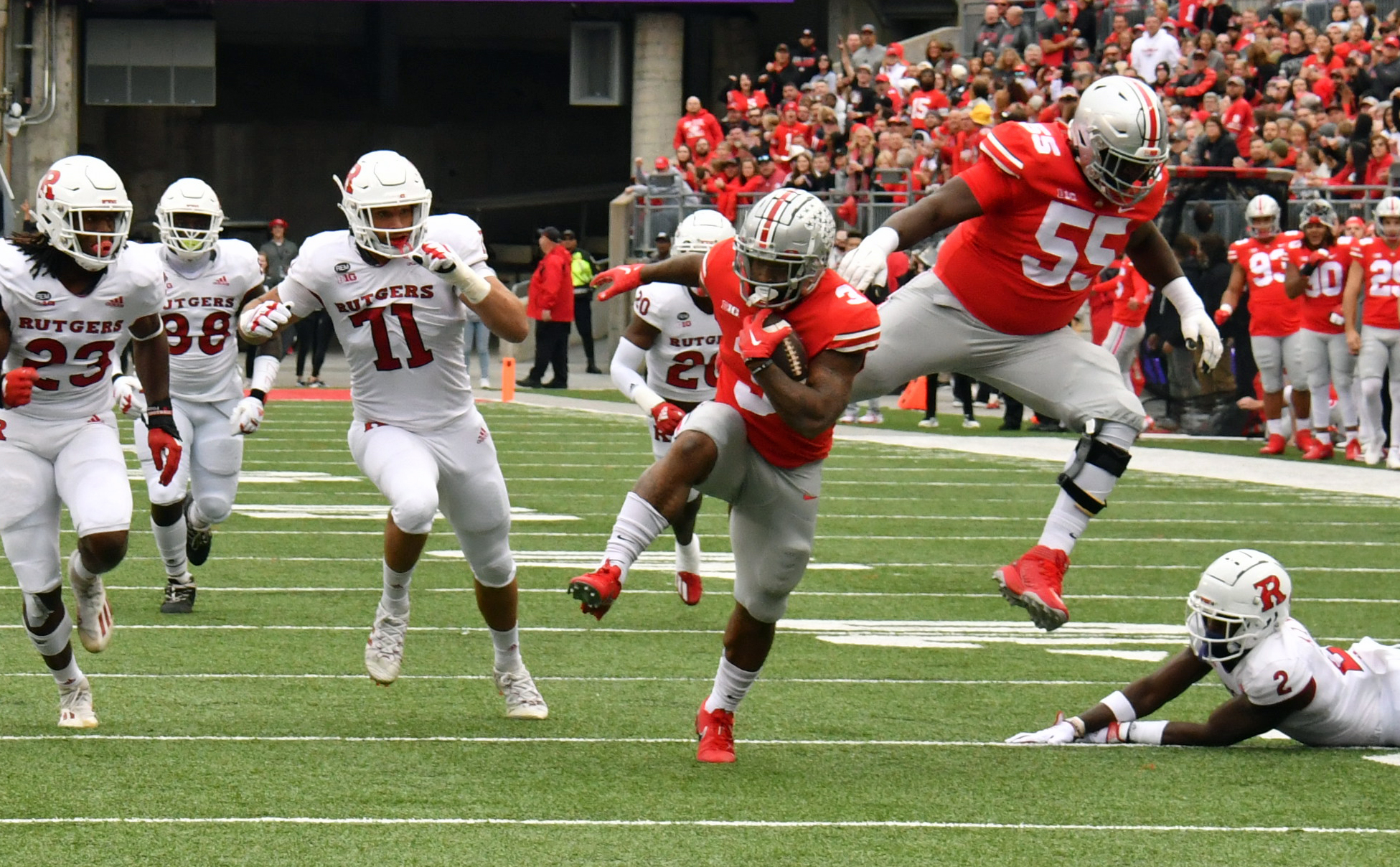 Ohio State rolled to its fifth-straight victory on Saturday, coasting to a 49-10 win over the Rutgers Scarlet Knights.

Prior to kickoff, Buckeye Sports Bulletin posted three questions regarding Ohio State’s standing heading into the Rutgers game. Now, we’ll look back and answer those questions after the Buckeyes emerged victorious on Saturday.

It’s safe to say that the Buckeyes absolutely dominated the Scarlet Knights through their running game. Although Rutgers entered the game allowing just 56.5 rushing yards per game and Ohio State was without No. 1 option TreVeyon Henderson, the Buckeyes did not skip a beat on the ground.

Third-year running back Miyan Williams rumbled for a career-best 189 yards while tying the Ohio State single-game program record with five rushing touchdowns — etching his name next to Pete Johnson and Keith Byars.

The Buckeyes finished the afternoon with 252 rushing yards as Williams was supported by 28 yards from freshman Dallan Hayden and a 22-yard run from punter Jesse Mirco, which occurred when he took off because there was no Rutgers defenders in the area.

Ohio State registered two takeaways against the Scarlet Knights on Saturday, and defensive end Zach Harrison was in the middle of both plays.

During the first quarter, Harrison — who lined up at a three-technique — shed off a block from the Rutgers center and popped the ball free from a scrambling Evan Simon. Defensive tackle Mike Hall Jr. landed on the ball, giving Ohio State great field position at midfield.

Harrison also made an impact against Simon’s aerial attack. During the third quarter, Harrison batted a pass from Simon which floated in the air until it landed in linebacker Steele Chambers’ arms. Chambers returned the interception to the Rutgers 20-yard line, where the Buckeyes took advantage of the field position — scoring just 28 seconds later.

3. WILL INJURIES CONTINUE TO BE A FACTOR FOR THE BUCKEYES?

Injuries continued to pile up for Ohio State against the Scarlet Knights.

Running back TreVeyon Henderson was a late scratch, while safety Tanner McCalister exited the game during the first quarter after sustaining an injury. Star wide receiver Jaxon Smith-Njigba also remained unavailable against the Scarlet Knights.

Ohio State was once again without the services of cornerbacks Cameron Brown and Jordan Hancock, but Denzel Burke returned to action after missing the Wisconsin game.