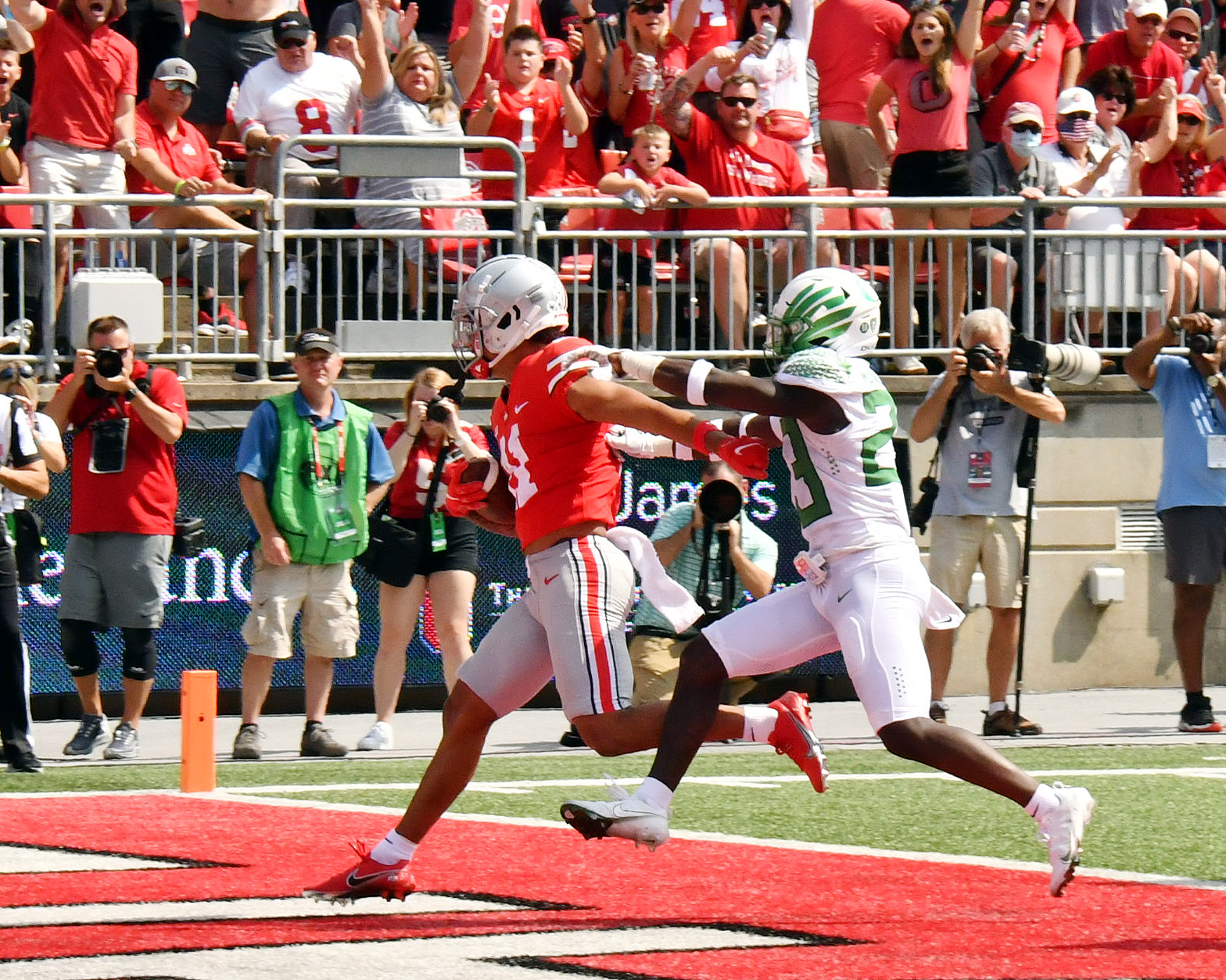 The Horseshoe, not fully sold-out but close to it at 100,482 in attendance, was a bit more impressive than it usually is, especially for a Noon game. Many of those in attendance still spent plenty of time sitting on their hands – though the Buckeyes gave them little to cheer for in the first three frames of play – but the crowd was legitimately intimidating in the final period and caused some real problems for the Oregon offense.

It’s been a while since Ohio Stadium has forced a false start, and it looked for a while as though the suddenly awake Horseshoe would be able to will the fledgling Buckeyes to victory, serving as a spark point for two fourth quarter defensive stops. However, it was the Ohio State offense that couldn’t respond, and there’s not a whole lot that a crowd can do for that beyond perhaps an appeal to a higher power.

2. Are the early game jitters gone for C.J. Stroud?

For the most part, yes. Stroud still opened the matchup with some shakiness, missing badly on a fourth-down pass to Chris Olave on the first drive of the game, but he was largely solid in the first half, and managed to find the end zone twice more in the last 30 minutes. He’s still benefitting greatly from one of America’s best receiver rooms, but it’s hard to hold that against him.

Plus, he actually involved a third receiver against the Ducks, throwing to Jaxon Smith-Njigba seven times for 145 yards and two scores. His predecessor was never able to unlock a third wideout, and he’s suiting up on Sundays. Doing so in just his second game as a starter is a very good sign for Stroud.

However, as noted, the offense did stall late and Stroud is the man atop that unit. It’s hard to blame him though, given the circumstances. Ryan Day took the blame postgame for asking Stroud to press for big plays at the end of the game, and behind an offensive line that began to deteriorate in the final few minutes, Stroud looked as you may expect any young QB in that spot to look. Chalk it up less to jitters and more to being asked to do too much.

3. Does Ohio State’s defense take a step forward with a smaller rotation?

It’d be great to get an answer to this one at some point, but despite spending the week saying he would, defensive coordinator Kerry Coombs showed no interest in cutting down his defensive rotations on Sept. 11. The Buckeyes still looked more like an NFL team in their substitutions, rolling players in at just about every position within every series, only settling on a solid group in the final few drives, which also happened to be the best of the day for the maligned silver bullets.

It seems that the issues for Coombs’ group go far beyond indecisiveness in personnel, though. Schematically and individually these Buckeyes look lost, and though constant personnel changes don’t help with that, it’s hard to single that out as the lone problem this week, especially after it was already used as the scapegoat among Coombs defenders following a closer-than-expected win over Minnesota. As those defenders dwindle, so too do the excuses.