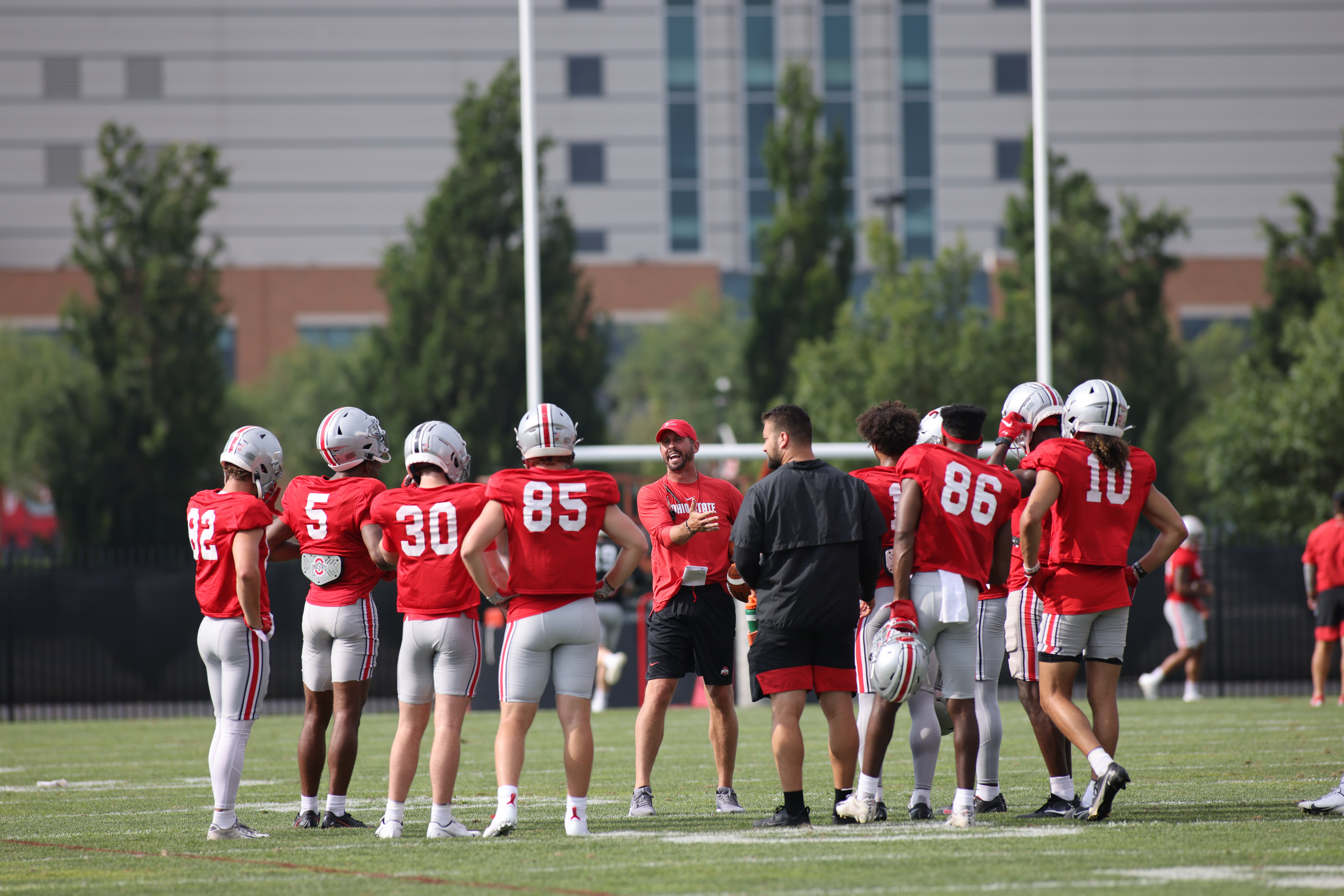 With Ohio State into fall camp and welcoming reporters back into the Woody Hayes Athletic Center to talk to coaches for the first time since early 2020, Buckeye Sports Bulletin is jumping back into the preview game with position-by-position looks at the team ahead of media availabilities with the respective position coaches. Today, wide receivers coach Brian Hartline and several receivers take center stage.

1. Just how high is the ceiling for the Olave/Wilson pairing?

The pairing of Chris Olave and Garrett Wilson in the receiving corps at Ohio State was only supposed to last one season. The assumption, as Ohio State exited the 2019 campaign and began preparations for 2020, was that Wilson could slide into one of the starting spots vacated by Binjimen Victor, Austin Mack and K.J. Hill and play alongside Olave for one season, creating one of the nation’s best duos before the elder Olave departed for the NFL.

Olave, however, didn’t seem to get the memo, announcing his intention to return for his senior season shortly after Ohio State’s national title loss, despite a resume that would have likely earned him a round two nod at the worst in the NFL draft. There are certainly worse problems to have.

With both star receivers back, the question in the receiver room shifts away from the floor to the ceiling. Olave and Wilson have spent a year playing together, learning how the other likes to operate and fine-tuning their timing and chemistry, and the latter is set to move outside and opposite of the former, after spending the 2020 season alongside him in the slot. It’s hard to imagine a defense with two outside cornerbacks capable of keeping up with these two, and that’s before factoring in a former five-star in the slot, and a potential first-round tight end on the line.

Last season, the two combined for almost 1,500 yards on 93 receptions in just eight games (seven for Olave). With a full season ahead, how high is the ceiling atop the Buckeye receiver room?

2. Who claims that slot role?

The luxury at the top can make up for just about anything beyond it, but Ohio State is still holding something that at least resembles a competition in the slot to replace Wilson, though to suggest that anyone other than Jaxon Smith-Njigba would get the nod is foolish at this point.

Still, a battle is a battle at least in name and Ohio State certainly isn’t lacking in talent gunning for the job – nor is it unwilling to flex uncommon body types into the slot (see: Wilson, Garrett). Smith-Njigba is the leader in the clubhouse, but sophomore Julian Fleming and freshmen Emeka Egbuka and Marvin Harrison Jr. have impressed throughout fall camp and came to Ohio State with varying levels of hype in the recruiting world (varying from very high to extremely high, essentially). Given that the exterior starting roles are accounted for, those players have to find a way onto the field somehow, and the “open” slot spot makes for a convenient bottleneck, even if the starter is seemingly a foregone conclusion.

3. How much playing time is available for the youngsters?

Assuming Smith-Njigba holds onto the starting role in the slot, Ohio State will find itself with four very capable young receivers – the aforementioned trio and freshman Jayden Ballard (also a top 100 recruit in 2021) – that it would certainly like to get onto the field as it prepares for a world without Olave or Wilson in 2022. However, to hit that mark, Ohio State is going to have to shift its approach at least a bit, because the backup receivers on the 2020 team combined for 17 receptions and 123 yards, entirely supplied by Smith-Njigba and Fleming.

Obviously, 2021 is not 2020. With more games and more easily winnable games, Ohio State should be able to get the reserves much more involved this season than it could last, as long as it can rattle off some significant first-half victories, which it didn’t a year ago. It may not be a huge concern this season, because the future is always less pressing than the present, but Ohio State would likely be quite a bit more comfortable in replacing its stars next season if it’s seen Ballard, Egbuka, Fleming and Harrison making plays in an actual game, rather than just on the practice field.