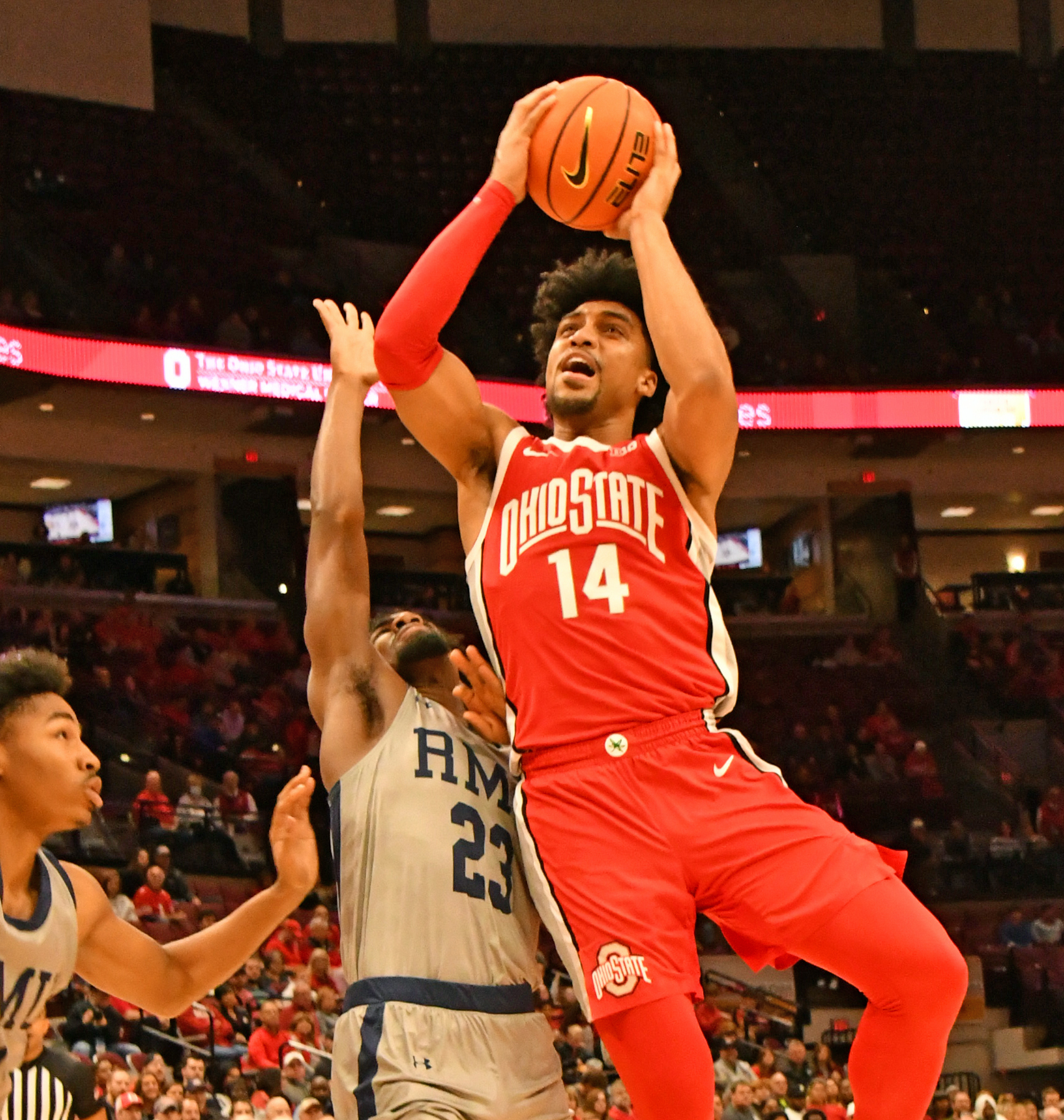 Across the game’s first eight minutes, the Buckeyes looked like a team still adjusting to playing with one another — as OSU sported 10 new players on its roster heading into the season opener. The Buckeyes fell into an early 15-13 hole with 11:40 remaining in the opening frame as turnovers and defensive miscues plagued the Buckeyes. From there, however, things clicked for OSU, as the Buckeyes cashed a trio of threes, drilled by Zed Key, Roddy Gayle Jr. and Justice Sueing, in quick succession to jump into the lead for good.

Sueing — who played in his first game since Nov. 12, 2021, after missing all but two games last season with an abdominal injury — sparked a 27-13 run to close the first half, scoring 12 of his 20 points during the opening frame. The Honolulu native was the catalyst for Ohio State’s three-point marksmanship, finishing the evening 2-of-3 from beyond the arc. Sueing also provided the Buckeyes with hounding on-ball defense, leading OSU with three steals.

“It was really emotional,” Sueing said of his return to action. “I talked to my pops before this, just talking about how God put me through these couple of hurdles that I had dealt with over this past year. I think it built me to be stronger as a man and as a player.”

Sueing’s three-point shooting was matched by an unlikely Buckeye, as Key also tallied a pair of treys during the opening frame — hitting his first two attempts, including Ohio State’s first bucket of the season. Key produced the third double-double of his career with 13 points while leading the Buckeyes with 10 rebounds.

Key noted that he spent the summer months working on his three-point shot and was excited to see it come to fruition against the Colonials.

“I worked on it a lot this year,” Key said. “During the summertime, it was one of my main goals, to be able to add a three-point shot to my game. Every day with Coach Diebler, Coach Holtmann and the rest of the staff, they believed in me and they want me to shoot.

“I put in the work and the first shot of this year was a three,” he continued. “I wasn’t expecting that either.”

Key and Sueing carried over their first-half success into the game’s second frame, helping the new-look Buckeyes run away with the victory by combining for 15 second-half points. Ohio State outscored the Colonials 49-25 during the second half.

As for the freshmen, forward Brice Sensabaugh led the first-year Buckeyes in scoring with 17 points while point guard Bruce Thornton dished out four assists. Gayle added 7 points on 3-of-5 shooting and center Felix Okpara manned the paint by producing two rebounds to go along with a block.

Although the evening was defined by Ohio State’s prowess from beyond the arc, the Buckeyes also made a living in the paint — where they outscored the Colonials 44-22. OSU’s efforts in the lane were aided by 14 offensive rebounds, which it turned into 16 points. Key led the way with four offensive boards.

While Ohio State’s offense was firing on all cylinders from three-point range, The Buckeyes’ defense also showed out on the perimeter. OSU held the Colonials to just 16.7 percent (4 of 24) shooting from beyond the arc.

Although Ohio State made life difficult for the Colonials for much of the evening, RMU junior guard Enoch Cheeks was a bright spot — dropping 17 points behind 7 of 15 shooting. Cheeks was the only Colonial to hit multiple threes, finishing with three makes from distance.

Following the win, head coach Chris Holtmann noted that he was pleased with how his young team handled the pressure of playing an experienced team like Robert Morris.

Ohio State returns to the hardwood on Thursday as the Buckeyes host Charleston Southern at 6:30 p.m. The game will be televised on Big Ten Network.