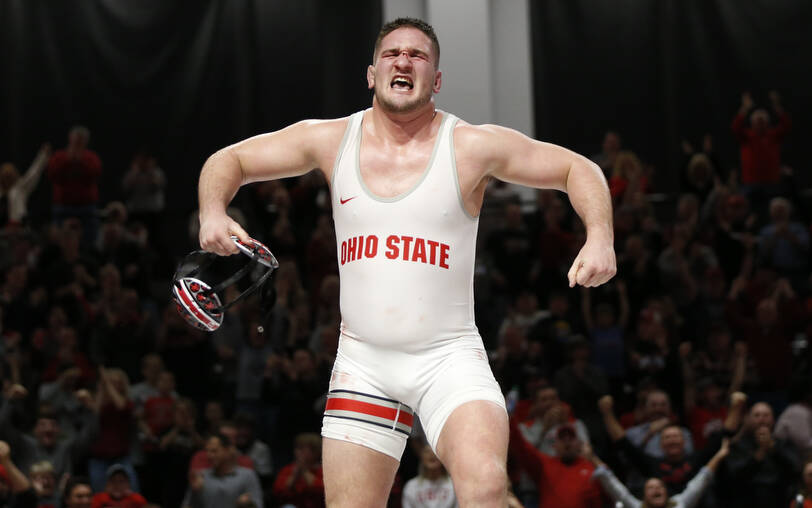 True freshman wrestlers Jacob Decatur and Jordan Decatur and four-year junior Gary Traub came to Columbus without scholarships because they wanted to be a part of Ohio State wrestling.

The preferred walk-ons worked their tails off since arriving, and head coach Tom Ryan rewarded their dedication with scholarships. Here is the video of them finding out they had earned scholarships, with a short speech from associate head coach J Jaggers.

The Decaturs could have definitely wrestled elsewhere with scholarships to start, but they wanted to be Buckeyes, regardless.

Jacob Decatur (125 pounds) was a back-to-back state champion at Division-II Cuyahoga Falls, Ohio, Cuyahoga Valley Christian Academy, where he went 130-12, including a 39-0 junior campaign. Jacob was the 2018 Ironman champion and took third in 2017.

While wrestling unattached in his first season as a Buckeye, Jacob Decatur is 13-4, with five major decisions and one tech fall.

Jordan Decatur is 9-2 in his young Ohio State career, including two major decisions, one tech fall and one pin.

Traub has much more collegiate experience than the Decatur brothers, holding a 46-17 overall record since arriving at Ohio State, with four major decisions and eight pins.

The heavyweight affectionately known as “Gas Tank Gary” has thrived as a fourth-year junior, boasting a 16-2 ledger with one major decision and five pins.

In addition to taking classes, Traub has been working part-time while training, practicing and traveling with the team. The scholarship should help alleviate some of that financial stress for Traub.

Earning scholarships as walk-ons shows the hard work and dedication each one of the student-athletes has put in since becoming Buckeyes.