‘This Has Been The Hardest Stretch Of My Professional Career’ 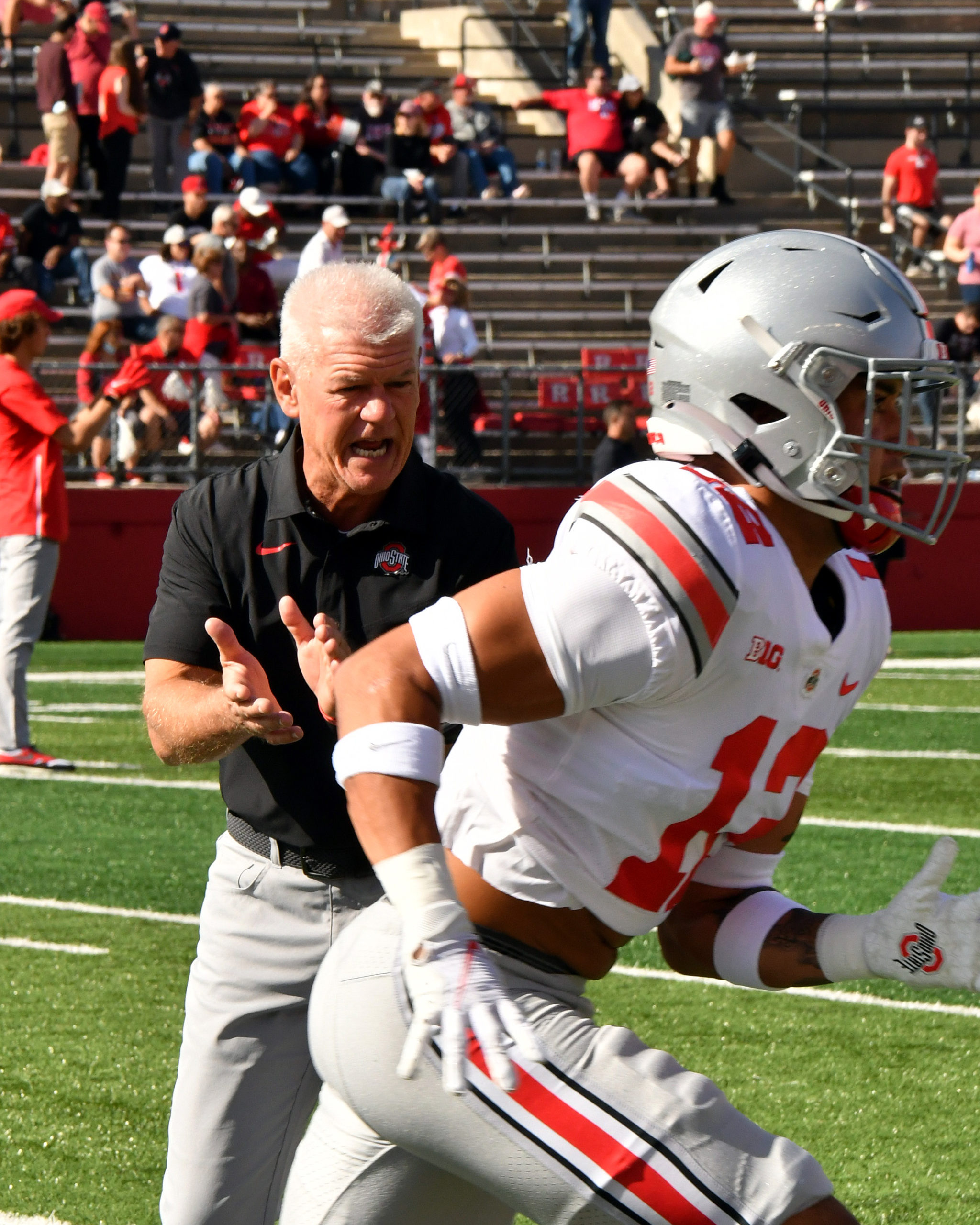 Ohio State defensive assistant Kerry Coombs was not shy in his first meeting with media since his demotion from coordinator about how he’s handled the change. He talked about wanting to do whatever it took to help his team, and about wanting to set an example for his players, but he also talked about this move being the most difficult of his career. About feeling a little lost and looking for guidance from friends and family. About struggling with his extremely public fall from grace.

“I would tell you that this has been obviously the hardest stretch of my professional career, which I would tell you means I’ve had a really good career,” Coombs told media. “Because if this is the hardest stretch then life’s not going to be too bad. I would tell you that we serve a powerful and wonderful God and that my friends and family that have shared with me scriptures like James 1:2 or Philippians 1:27 or Romans 8:28, and have continued to lift me up and allowed me to try to be a worthy man and a man of strength, that has been invaluable.

“And I have been blessed. I’ve been blessed by people in this profession. The Mike Tomlin’s and the Mike Vrabel’s in the Dick LeBeau’s of the world that have reached out and had great advice and great insight into this profession and this career. And so I would tell you that the handling of it is a work in progress.”

But for Coombs, those struggles and the difficulty of essentially losing what he considered one of his dream jobs could not outweigh the responsibility that he had within Ohio State’s program, and the lessons that he’s attempted to provide for his entire coaching career.

“But I would also tell you this, that if I, in my opinion, that handling it in a different fashion, picking up your ball and going home, kicking the can down the road, quitting, packing your stuff up, being a miserable human being, if I had done those things, that would make me a liar to every one of those young men that I’ve coached along the way that had tough times,” Coombs said. “That got replaced on a given Saturday or a Friday night or a Sunday afternoon and had to have the conversation with, ‘Hey, hang in here. It’s going to be okay.’ Whether they agreed with the decision or not, it didn’t matter. You have to battle and fight through.

“Those players and young men that struggled with the public criticism and things that are out there in the world today. If you want to look them in the eye and tell them, ‘Hey, you need to hang in there. Don’t accept criticism from somebody you wouldn’t accept advice from.’ If you’re not willing to stand up and do the same thing, then you’re a liar to all those people along life’s journey.”

The move out of the limelight and even off the sidelines hasn’t been all bad for Coombs, though, who said that he’s still having a great time in his new role and that he contributes wherever he can, both in hands-on coaching and in gameplanning – though he does miss the fire of the sidelines.

“I’ve got to tell you – and this was another blessing that comes out of tough times – I had not been in the press box for a long time,” Coombs said. “And when I was, it was my first year at Cincinnati and it was a brief period of time. And I have found being in the press box to be very valuable. It’s been something that I think has enhanced my ability to see the game, communicate the game and I think that that’s been a real strength over the last couple of weeks.

“I miss hugging people. I’ve got Kevin Wilson now and I gotta be honest with you, it’s not the same. And so that part, that’s real. I miss that desperately, being on the sideline, but that’s selfish too. And so having the opportunity to go up there, which was my idea, by the way, and be able to see it, and I think, really, really see it and get a feel for the game, has been really helpful.”

As for what Coombs actually does on a consistent basis, he described it as a little tricky and vague to detail, but he can be seen on the field prior to games talking to both recruits and players, and as he tells it, he’s still serving in the motivational role that he filled for so many years on so many sidelines.

“It’s very hard to describe it,” Coombs said. “I think that we were working as a collaborative unit prior to changing who was going to have the final say on the call on the sideline.

“I think that in some ways, those things are still true. I have tried to change my role a little bit, first of all, because I’m in the box. Second of all, because I’m spending some time on some other things relative to the game plan that I think are important. And so at the end of the day, there’s an awful lot of conversation, obviously, during the week, and then by Saturday, there’s still a good bit of conversation and we will sit together and talk about this place on the field and this personnel grouping and this call versus this down and distance situations so that by the time we are Saturday, it feels like everybody can make the call.”