The Scarlet And Gray Appeal 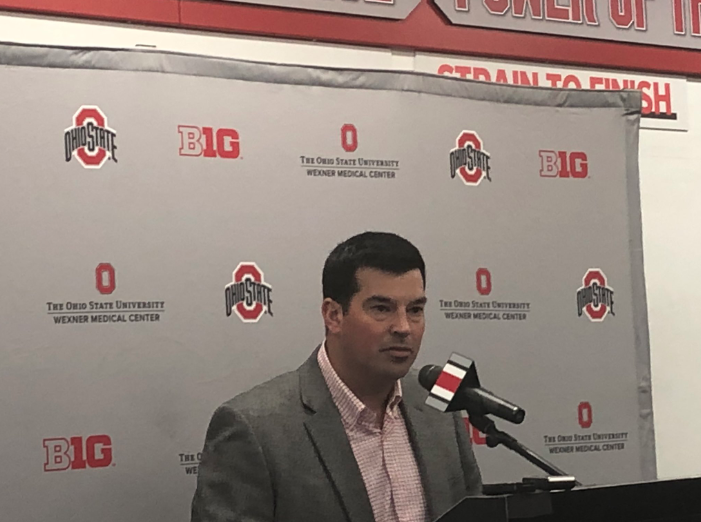 Ohio State head coach Ryan Day wasted no time assembling a coaching staff in his first month at the helm.

Day met with the media following the introduction of his staff’s newest members, and expressed his eagerness to integrate new faces into the program.

“Really excited about what we put together as a whole staff. Had a workout today early in the morning, 6 a.m., a lot of excitement, guys were running around, coaches were part of it, too. I really think the time spent — it wasn’t easy putting it together, really wasn’t. There was a lot of time and thought put into this thing. Really excited about it.”

The opportunity to win at the highest level enticed Barnes toward Ohio State, the Ijamsville, Md., native did not come to Columbus just because of the championship expectations on the field.

“Well, it’s a special place,” Barnes said. “You know, winningest football program in college football history, and just so much tradition. A chance to compete for a championship every year, but also to be a part of, for lack of a better way to put it, doing things the right way, developing young men, giving them an opportunity to be successful in the classroom, on the field, and then the years that they spend after they’re done playing football.”

Day also brought in a proven offensive coach to his staff, Yurcich, to serve as passing game coordinator and quarterbacks coach. While at Oklahoma from 2013-2018, the Euclid, Ohio, native earned two nominations for the Broyles Award, honoring the nation’s most outstanding assistant coach.

“You know, Ohio State and why I came here, there’s probably about 105 good reasons right now for me to talk about,” Yurcich said, “but to really cut to the chase, it was part coming home and being part of something as great as Ohio State. I’m very humbled, and my family is very humbled to be a part of that.”

In addition to poaching Barnes and Yurcich from fellow FBS programs, Day hired two coaches away from the Buckeyes’ archrival. Washington spent just one season as linebackers coach at Michigan, but has 11 years of coaching experience, including his time at Boston College with Day.

“I think Ohio State — I’ve known Coach Day and know the program and tradition, but mom and dad are 20 minutes away. I’ve got a three-year-old, a one-year-old. My wife went here. A lot of who I am is from obviously the 614 and Columbus and my father playing here. You all are pretty versed in that narrative. I think those things definitely were major contributors to coming, that unique blend of everything.”

Co-defensive coordinator Mattison comes to Columbus with nearly five decades of coaching experience, including 13 seasons at Michigan. The seasoned veteran enjoyed his time in Ann Arbor but yearned for more responsibility.

“I’m very fortunate to have had the opportunity to work at two of the greatest programs in the country and in all of college football. Luckily you add Notre Dame in there, I kind of say, wow, I’ve had a pretty good run.

“The big thing, leaving Michigan was a very tough decision. I spent 13 years there. But I also have spent 19 out of the last 24 years coordinating, and to have the opportunity to have a co-coordinator at a great university like Ohio State was something that — an opportunity that I really wanted to pursue, and that was the biggest thing.”

Day said he called Michigan head coach Jim Harbaugh to tell him of his intentions, and pursued Mattison and Washington without concern of their previous affiliations.

“Whether I was coaching here, anywhere else, I would have tried to hire Greg Mattison,” Day said. “It all comes down to who are the best coaches for our players, whatever that was. That’s what makes (athletic director) Gene Smith so good, ‘Just go get them. Whatever you need, get those guys.’ That was the determination we made. They just went ahead and did it.”

In addition to the coveted college coaches that Day brought in, he hired Hafley away from the NFL, where he had spent the past seven seasons with the Buccaneers, Browns and 49ers. Prior to his time in the NFL, Hafley spent 11 years coaching among the college ranks.

Hafley, who will serve as co-defensive coordinator with Mattison as well as the secondary coach, expressed his excitement to get back on the recruiting trail as opposed to being limited in the NFL Draft.

“I get more than two DB’s now,” Hafley said. “We get to go evaluate, we get to go pick them. And if we want them, we’d better work and get them, and that fires me up to give us a chance to do it. And I believe I have the experience with what I’ve learned over the last seven years to give a lot to offer these guys.”

Day raved about the staff that he meticulously constructed, frequently saying he was excited to work with the new staff members. The 25th head coach in program history emphasized the importance of having coaches who make genuine connections with their players.

“Wanted guys who wanted to be here — Ohio ties, Big Ten ties,” Day said of what he was looking for in the hiring process. “Again, guys that we thought were going to make our players better.

“The two things we talk about all the time as an assistant coach, if your players love you, they’ll do anything for you. You got to build that relationship. Guys that are relationship oriented — then how do you make them better? If these guys think they’re getting better every day, they feel themselves getting better, they’ll go through the roof for you.”