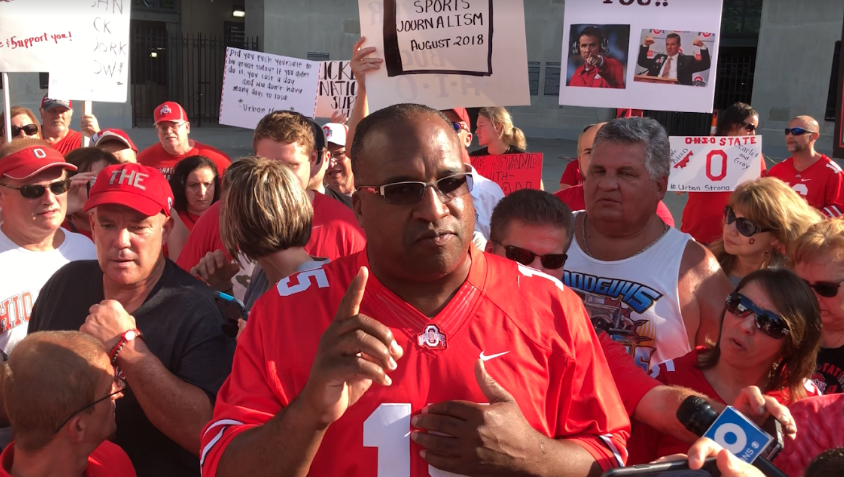 As an Ohio State investigation continues with Urban Meyer on paid administrative leave, between 200-250 people clad in scarlet and gray gathered Monday for a 6 p.m. rally at the north rotunda of Ohio Stadium to show support for the embattled head football coach.

Organized by Jeff Hamms, a 49-year-old fan of the Buckeyes who is also known as “Tennessee Jeff” and lives in Myrtle Beach, S.C., the group stood with signs and chanted cheers for Meyer throughout the course of the brief rally.

While the team was off and checked into its hotel ahead of Tuesday’s practice, which marks the fourth of fall camp, more attention was drawn Monday to OSU’s situation with Meyer and former wide receivers coach Zach Smith.

In the past two weeks, allegations of the since-fired Smith’s past domestic violence have followed the program prior to its 2018 season.

With the recent developments in mind from July 24 at Big Ten Media Days and Aug. 3 between Meyer’s statement and Smith’s interview, in addition to criticism from ESPN’s Paul Finebaum and others, Hamms announced Meyer’s rally Aug. 4 on his Facebook page and drove up to Columbus over the weekend.

After the rally, Hamms explained his motivation for why he went ahead with it. 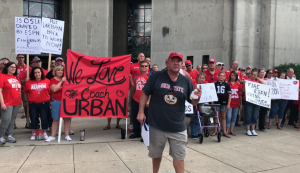 “People say, ‘Why are you wired like this?’ I say … ‘I swear to God, I don’t care if three or four would have showed up. It doesn’t matter to me.’ My main objective was to show Urban Meyer how much we love and adore that man as not just a 90-percent winning coach but as the coach of Ohio State Buckeye football and the man himself and what he’s done for the university,” Hamms said. “I know Urban Meyer a whole lot better than Paul Finebaum does — I promise you that. So that’s why we’re here, just to support our head football coach and that’s it. That’s the main thing in this whole thing, was to just support Urban Meyer.”

Among those in the crowd, Stacy Elliott, the father of former OSU star running back Ezekiel Elliott, was front and center when the rally winded down.

Ezekiel Elliott signed with Ohio State from St. Louis John Burroughs as a four-star prospect in the 2013 recruiting class. Ezekiel Elliott played for Meyer from 2013-15 before he went at fourth overall in the first round of the 2016 NFL Draft to the Dallas Cowboys. 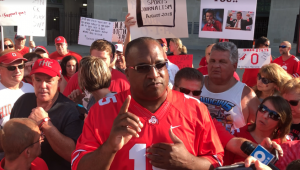 After a breakout rookie season in 2016, Ezekiel Elliott served a six-game suspension in 2017 after his ex-girlfriend accused him of domestic violence in July 2016. Stacy Elliott alluded to his son’s situation when he acknowledged the criticism against Meyer.

“There are a lot of people who come out of the woodwork and try to accuse you of things you didn’t do,” Stacy Elliott said. “But I say that from a position of not giving anybody a free pass for abusing women. But this is the reality — the Elliotts, my family, we’re living this. People come out of the woodwork when you’re in the spotlight and they make up accusations. When you’re a just man, you have to ride it out and figure out what is right and what is wrong, but (Meyer) followed the rules of The Ohio State University.”

Asked about his thoughts on how outsiders might view Ohio State after the rally, Hamms defended his decision to support Meyer.

Stacy Elliott echoed those sentiments, adding how he hopes to speak with Meyer and tell him of his support.

“I would never — and I know Urban Meyer would never — condone a woman being abused, so those who abuse women need to stop right now,” Stacy Elliott said. “But the truth of the matter, based on what we all know, he handled the situation according to how his job required him to. So to hold him in this situation where he’s got to deal with his emotions, not being with his boys and representing this university with the utmost integrity is wrong.

“You’re damn right I’m going to call him. I’m calling him right now. Don’t worry, coach. God is with you.”