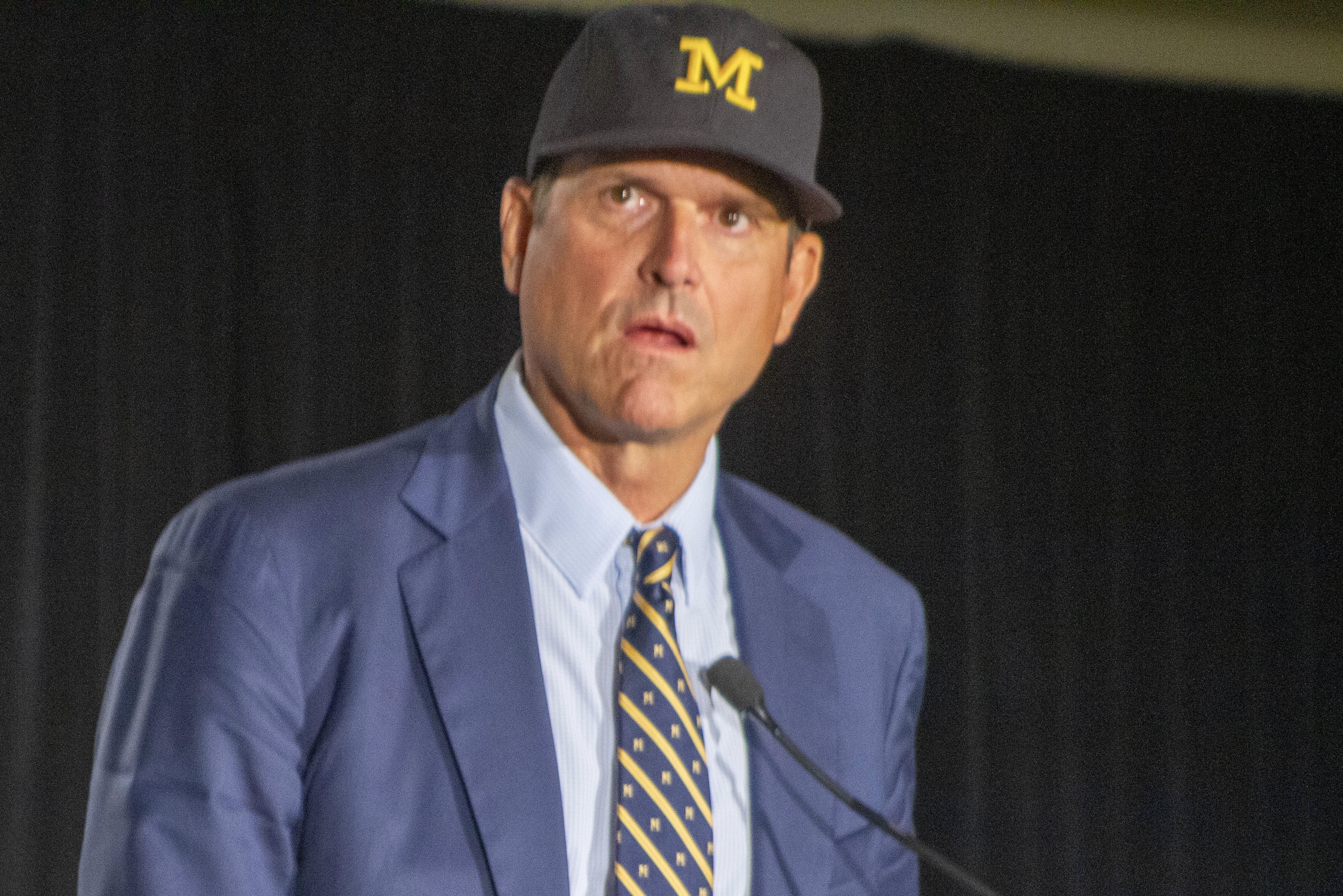 Here are my observations and opinions:

Former Big Ten Commissioner Jim Delany brought up a good point in regards to the College Football Playoff and the inconsistencies with which programs make it in year to year. Delany mentioned how he wished the schedules between schools in different conferences were aligned more similarly, with teams playing the same number of conference games. I think this makes sense because if a school in one conference faces nine tough conference opponents and another school only opposes eight, then the school with eight conference games can schedule an extra easy nonconference game.

Illinois head coach Lovie Smith did not try to hide the fact that his program has struggled, which I appreciated — some coaches enjoy too much sugar coating for my taste. Smith also said something in regard to the transfer portal that caught my attention. Smith said, “Sometimes divorce is a good thing.” I think that is a good point regarding the transfer portal because making a student-athlete stay somewhere he or she does not want to is bad for all parties. Sometimes what is best for the student-athlete and the school is a fresh start.

Nebraska head coach Scott Frost praised his sophomore quarterback Adrian Martinez, saying he wouldn’t trade him for any quarterback in the country. Although that may seem like hyperbole, Martinez is an elite dual-threat signal caller and should have a big-time season in Lincoln, Nebraska.

I also think Frost has an excellent approach to recruiting and when asked if he made Michigan a priority in recruiting, his answer was spot on … “We’re going to go where the players are,” Frost said. “I don’t care where they are, if they’re in Jamaica or Kazakhstan, we’re going. If they’re in Michigan, so be it. We’re going to come up and try to get the best players we can.” That’s the only way to recruit, in my opinion. You’re not going to win by just recruiting a particular area.

Michigan State head coach Mark Dantonio talked about how he placed his assistant coaches back to their areas of expertise. All I could think about was why were Michigan State’s coaches not already coaching the position groups they are most familiar with. I’ve seen coaches working with random positions at every level of football but it still doesn’t make sense, especially at an upper-echelon Big Ten program like Michigan State. Maybe the Spartans will be better now that their coaches are coaching up the players at their positions of expertise … we shall see.

Indiana head coach Tom Allen said he will no longer call the Hoosier defense and will instead focus on being a better head coach. Allen’s decision to allow his staff to make the defensive play calls struck me as a good move that must have taken a lot to swallow his pride. A head coach has a lot of responsibilities that span beyond the X’s and O’s and Indiana’s defense could have been much better, so I think it’s a positive move for the Hoosiers.

Minnesota head coach P.J. Fleck stressed the importance of bringing in great teachers as assistant coaches on his staff. I think Fleck showed great awareness with this point. Even if a high school student-athlete is a four- or five-star recruit, he or she may just possess elite athleticism and not excellent fundamentals and knowledge. I think we tend to forget college athletes are generally 18-21 years old and many of them could benefit from great teachers.

Maryland head coach Michael Locksley spoke about his team’s saying, “Maximize it.” Locksley emphasized the importance of being intentional with one’s behaviors and being where one’s feet are, making the most of each opportunity. I think Locksley’s message can be applied far beyond the gridiron. If you’re going to do something, why not do it 100 percent?

Iowa head coach Kirk Ferentz also spoke on the transfer portal and mentioned how more clarity on who will be eligible and who won’t be would be nice, which I definitely agree with. Ferentz also said something that resonated with me, and I’d imagine would be refreshing to hear for some student-athletes. “Ultimately it’s kind of like everything we do in college football, it should be about what’s best for the players,” Ferentz said. The players are the ones sacrificing their time and bodies to the game, so their interests should be paramount.

Purdue head coach Jeff Brohm spoke about the improving Big Ten West and the “stiff competition” across the entire conference. “There’s a lot of great young football players that are being coached well that want to win,” Brohm said. “And I think in this conference you never truly know who’s going to win.” Brohm’s words were very true and I think the overall competition within the Big Ten can be misconstrued because of the extra attention given to Ohio State, Michigan, Penn State and Michigan State. And I agree with Brohm, you never know who is going to win, just look at the Buckeyes’ blowout losses to Iowa and Purdue in consecutive seasons.

Penn State head coach James Franklin took the podium and before any questions were asked, proceeded to list a bunch of stats regarding the Nittany Lions’ success in recent years. At first I was like, ‘OK, you can stop bragging about meaningless stats at any point now.’ Then I thought about why Franklin would feel compelled to remind everyone about his success in Happy Valley, Pennsylvania. Perhaps he is not as confident in his 2019 team and wanted to remind everyone of Penn State’s successes before it has a down year.

Northwestern head coach Pat Fitzgerald ended his time at the podium saying, “Stats are for losers.” Fitzgerald is not a fan of stats, but it was interesting that he spoke right after Franklin, who listed countless random stats about Penn State. The Nittany Lions have had some recent success, but not in the Big Ten Championship Game or the CFP, so Franklin seemed like a loser who was trying to make himself feel better about falling short.

Fitzgerald focused on the future of Northwestern, instead of listing stats about how the Wildcats won the Big Ten West in 2018. “The rear view mirror is small and the windshield is big for a reason,” Fitzgerald said. “If you get caught looking back as you’re moving forward, you’re going to be on a collision course with failure.” That kind of perspective is conducive to building an elite program with high standards. Who cares that your team was good last year? That was a different team. How good will you be next year?

Wisconsin head coach Paul Chryst was questioned about the possibility of student-athletes, like Badger phenom Jonathon Taylor, being allowed to leave for the NFL after two years instead of the mandatory three years. I think it is foolish to not allow Taylor to go to the NFL and earn his money instead of risking a career-ending or career-altering injury. Chryst did bring up a good point, however. “It’s hard to put an individual into a broad scope,” Chryst said. While Taylor may have been NFL ready as a sophomore, not every college football player is ready, so changing the rule could negatively affect others. I still think exceptions should be made if the players are locks for the NFL draft.

Rutgers head coach Chris Ash said it’s the first time in 10 years that the Scarlet Knights returned the same offensive coordinator from the previous season, which is just astounding. Perhaps a little cohesion will help Rutgers offense run more smoothly in 2019. Running the ball should be the foundation of Rutgers offense with running backs Raheem Blackshear and Isaih Pacheco leading the way.

Michigan head coach Jim Harbaugh felt the need to go on a podcast and bad mouth Urban Meyer during the week of Big Ten Media Days, then chose to double down on his comments at the podium. Meyer retired from his post as the head coach at Ohio State, yet Harbaugh felt the need to take a jab at him. It is pretty clear Harbaugh is trying to distract people from the fact that he is 0-4 against archrival Ohio State and continually fails to live up to expectations in Ann Arbor, Michigan. In 2018, the Wolverines spent most of the season as favorites to make the CFP, but crashed in a 62-39 shellacking in Columbus. As long as people are talking about Harbaugh’s jab at Meyer, then they might be distracted from 0-4 and 62-39. Unfortunately for Harbaugh, our attention span isn’t quite that short at BSB.

Ohio State head coach Ryan Day took the podium and received a question he can’t seem to avoid no matter where he goes — what are you doing differently than Meyer? Day answered the question about as well as he could have, saying, “You don’t replace a legend. You don’t replace one of the best football coaches in the history of the game.”

Day went on to talk about how all he can do is be himself, then speaking about the emphasis he has put on “tough love.” Day talked about being tough and challenging one’s teammates and how the bond of love between teammates is the “ultimate motivator.” He understands that a coach can tell the players to work out harder and that he or she cares for them, but when it comes from their peers, it takes on a different meaning. That bond of brotherhood is thicker than blood.