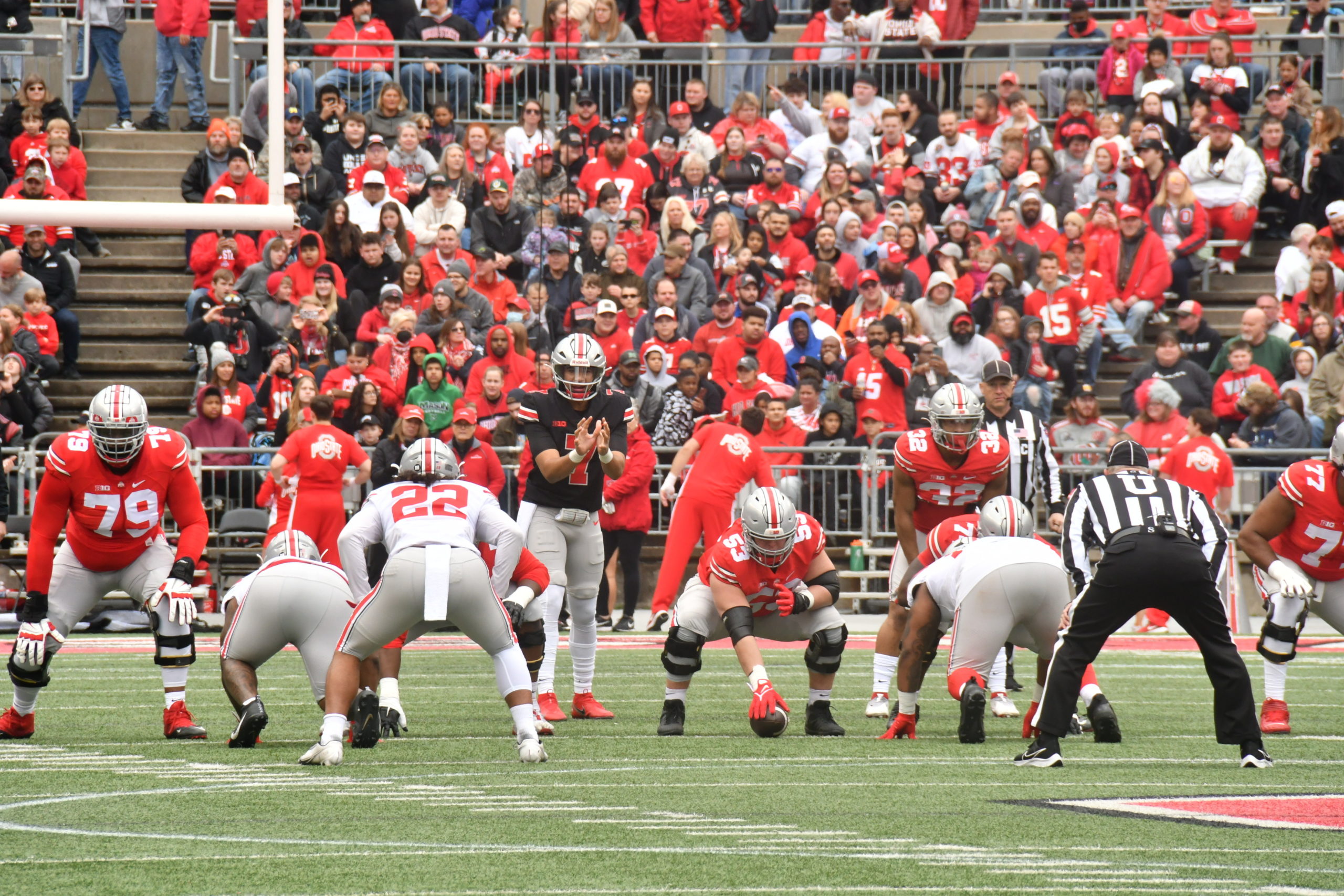 The Spring Game in Ohio Stadium on Saturday was the unofficial start to the 2022 season which commences for real when Ohio State hosts Notre Dame on Sept. 3.

Under cloudy skies and a 48-degree temperature at kickoff, more than 60,000 fans got a look – somewhat – of new defensive coordinator Jim Knowles’ defense, as limited as it was.

Head coach Ryan Day pitted the offense (Team Scarlet) vs. defense (Team Gray) instead of a more traditional splitting of the players for equal teams or pitting the first unit offenses and defenses against the second teamers.

As such, the scoring was altered. The offense got usual scoring for touchdowns, field goals and extra points but the defense was rewarded with six points for a TD, three for a takeaway, two for a sack and one for a point.

For the record, the final score favored the offense, 34-26.

The gloomy weather matched the atmosphere around the Buckeye community as a moment of silence was held before the game in memory of quarterback Dwayne Haskins, the 2018 Heisman Trophy finalist who was struck by a vehicle and killed on a Florida roadway on April 9.

The players wore a “DH” helmet decal and “DH” was written on the field at the 7-yard lines. Third-year sophomore QB C.J. Stroud, who wears No. 7 as Haskins did for the Buckeyes, played the first series in a jersey with “Haskins Jr.” as the name plate.

Also, a video tribute was shown at halftime.

The opening series used the “thud” format, which is essentially a touch football, and Stroud took the Scarlet 65 yards in 10 plays and 4:18, capped by a 29-yard TD pass to junior Jaxon-Smith Njigba at 10:42. Stroud was 4 for 6 for 53 yards; Smith-Njigba had two of the catches for 38 yards.

Meanwhile, Knowles defense kept to the basics but fans on the first drive saw sophomore Jack Sawyer start at the defensive-end-linebacker hybrid called the “jack.”

The second series employed tackling, except for the QB, which was sophomore Kyle McCord. All series started at the Scarlet 35 after a non-returned kickoff.

After the defense forced a punt by the Stroud-led offense, freshman Devin Brown took over for the fourth series. The drive stalled with the help of sophomore defense end J.T. Tuimoloau’s 4-yard sack.

The offense took a 21-5 lead at 4:54 of the second quarter on a shifty 22-yard run by redshirt freshman Evan Pryor. Stroud had a 10-yard completion to junior tight end Gee Scott Jr. on a third-and-7 from the Scarlet 38.

The lead went to 24-5 at 2:29 on a 42-yard field goal by third-year sophomore Jake Seibert, filling in for super senior Noah Ruggles, who took the semester off.

Third-year sophomore Miyan Williams had a 36-yard run to the Gray 29 but the McCord was unable to get the ball into the end zone.

In the half, Stroud was 14 of 22 for 120 yards; McCord went 7 for 7 for 68 yards and Brown completed 4 of 7 for 43 yards. Scott’s five catches totaled 40 yards and sophomore Emeka Egbuka had four catches for 39. Williams gained 73 yards on 11 carries and Pryor added 48 yards on seven totes. Henderson rushed for 12 yards on three attempts.

Stroud and Henderson did not play in the second half.

Brown upped the score to 31-13 at 7:09 of third quarter with a toss to the left corner to sophomore walk-on receiver Reis Stockdale. Freshman Jayden Fielding kicked the extra point. Williams had three runs for 24 yards on the drive and junior tight end Patrick Gurd had a 5-yard catch.

McCord returned to take the snaps and he guided the Scarlet to the Gray 9 but suffered a 9-yard sack by fourth-year junior defensive lineman Noah Potter and settled for a 38-yard field goal by sophomore Garrison Smith to make it 34-15. Graduate Sam Wiglusz had two catches for 21 yards and graduate Xavier Johnson added a 21-yard reception.

Early in the fourth quarter, Brown tried to connect with freshman Kyion Graves in the back of the end zone but it was broken up by junior cornerback Cameron Kittle and on the next play Tuimoloau had an 8-yard sack of Brown to the 20. Fielding then missed a 38-yard field goal attempt.

Kittle intercepted Brown at the Gray 11 and returned it nine yards with 3:27 left to make the score 34-26.

Williams finished with 101 yards on 15 carries and Pryor gained 62 yards on nine rushes and also had four receptions for 44 yards.