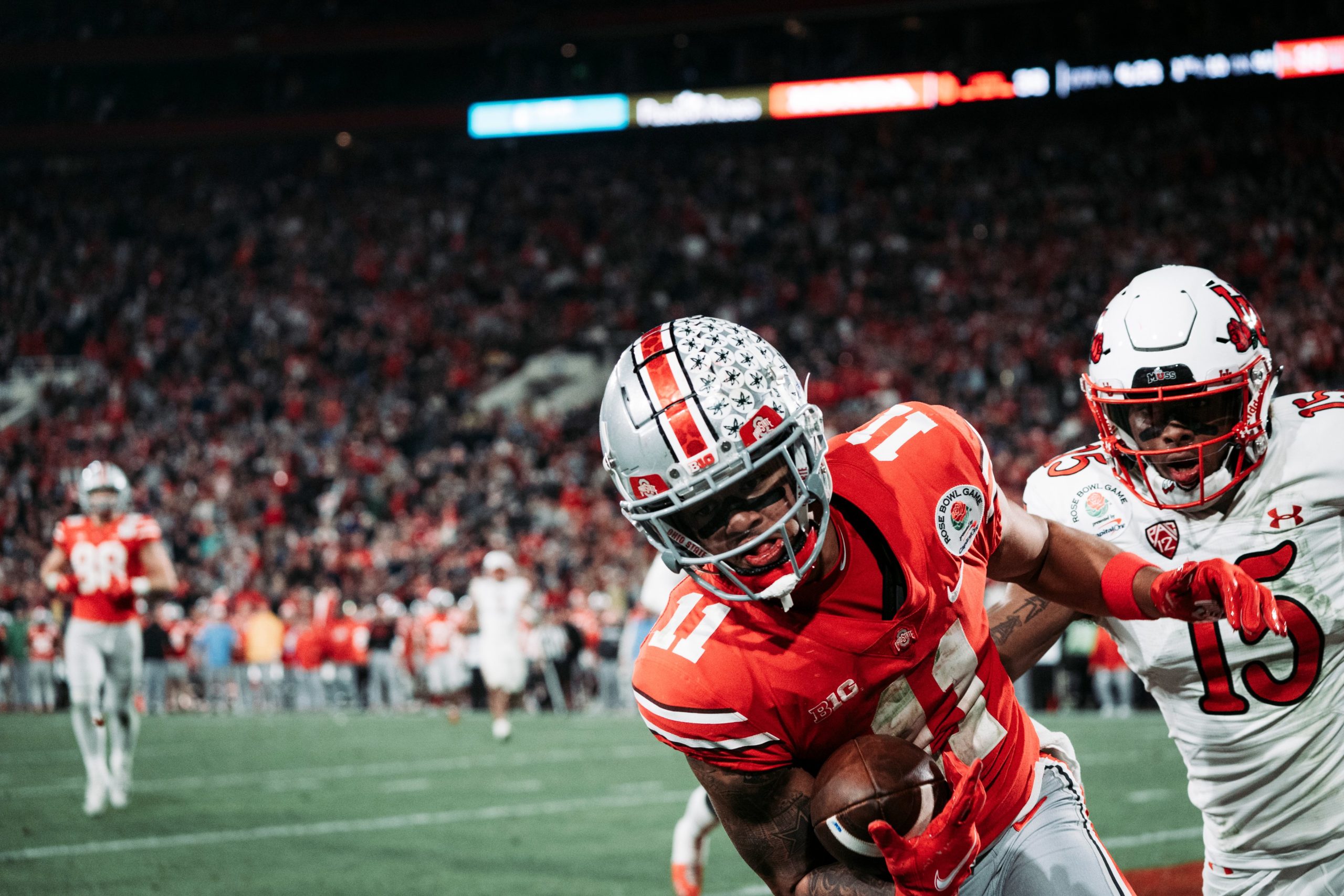 As the sun dropped below the San Gabriel Mountains and the blue sky turned orange and purple, Jaxon Smith-Njigba and C.J. Stroud rewrote the Ohio State record book in a gutsy, come-from-behind win over Utah in the Rose Bowl.

The Buckeyes, without wide receivers Chris Olave and Garrett Wilson after they opted out of the game to prepare for the 2022 NFL draft, were unsure where they might find their offense against the Utes.

Smith-Njigba was Ohio State’s leading receiver through 12 games, hauling in 80 passes for 1,259 yards and six scores. Still, losing Olave and Wilson meant the Buckeyes would have to replace 135 receptions, 1,994 yards and 25 touchdowns in the passing game, which would not be an easy task.

But the sophomore wide receiver filled the void, and he did it better than anyone could have imagined. Smith-Njigba caught 15 passes for 347 yards and three touchdowns. It was the most receiving yards by anyone in bowl history, and his records don’t stop there. The Rockwall, Texas, native added several accolades to his résumé in Pasadena, including the record for most receptions and receiving touchdowns in Rose Bowl history.

Smith-Njigba will also bring a handful of records back to Columbus, hanging them in the Woody Hayes Athletic Center for future recruits to see. He broke the single-season record for receiving yards, surpassing the previous mark of 1,435 yards set by David Boston in 1998, with a 15-yard reception from Stroud at the end of the first half.

His 10th catch of the game – a 20-yard reception late in the third quarter – gave Smith-Njigba 258 receiving yards, pushing him past Terry Glenn’s single-game record of 253 set against Pittsburgh in 1995. With his 11th catch of the Rose Bowl and 91st catch of the season, Smith-Njigba broke Ohio State’s single-season record for receptions, surpassing the previous mark of 90 set by Parris Campbell in 2018.

Smith-Njigba largely contributed to a record-breaking performance for Stroud, who threw for 573 yards, six touchdowns and one interception on 37-of-46 passing. The pair powered a fierce second-half comeback against the Utes that had Ohio State erase a 14-point halftime deficit, setting a stage for a 2022 season that will feature high expectations for the quarterback-wide receiver duo.

“C.J. and Jaxon have a great connection,” Ohio State head coach Ryan Day said after the game. “They have a great feel, and I think there’s a lot of trust there that’s been built over the year. I think it happened a little bit in the Nebraska game. Who knows? You’ll have to ask them. Maybe it happened last year. I don’t know, but they read each other well, and they have a special connection.”

Day could be right. Maybe Smith-Njigba’s 15-catch, 240-yard performance against Nebraska is when the chemistry started – a performance that tied Boston’s single-game reception record set in 1998. However, the redshirt freshman quarterback claims the bond began long before the players made names from themselves at Ohio State.

“We built that connection all the way back,” Stroud said. “We came in as freshmen together and came in early. We were throwing the first day. Scout team last year – we really built it. This doesn’t surprise me at all. When I heard the numbers, I didn’t really notice because he does this all the time. I’m just blessed to be around guys like this.”

Regardless of when the connection started, their connection was evident on more than one occasion in Pasadena. Smith-Njigba caught two touchdowns of 50-plus yards within 30 seconds of each other in the second quarter, and he almost had a third 50-yard score just over three minutes later had he not fumbled before reaching the goal line.

“Certainly, some of the plays he made tonight were tremendous. We leaned on him a lot,” Day said. “At one point I asked him, ‘Are you tired?’ after the play there where Clark (Phillips) caught him. He looked at me like, ‘What are you asking me for? Are you crazy? I’m going back out there.’ And played one of the best games probably in the history of the Rose Bowl.”

After the fumble, Smith-Njigba went for the records. In the second quarter, he made one more catch – the 15-yard reception that broke Boston’s single-season receiving yards mark – before adding 161 yards in the second half, including 89 yards in the fourth quarter, leading the Buckeyes to the win. A beautifully placed over-the-shoulder throw from Stroud to Smith-Njigba gave Ohio State its first lead, 45-38, with 4:22 remaining, but it was not all that was required from the pair to claim victory.

Utah quarterback Bryson Barnes, who replaced Cameron Rising after he left with a head injury, threw a 15-yard touchdown to tight end Dalton Kincaid in the right corner of the end zone, tying the game at 45 with 1:54 to play.

When Ohio State entered the two-minute drill, Stroud found his favorite target twice, connecting with Smith-Njigba for a pair of passes for 20 yards, pushing the Buckeyes deep into Utah territory and setting up Noah Ruggles with the game-winning 19-yard field goal.

“It’s the type of game that I dreamed of,” Smith-Njigba said. “I wouldn’t want it any other way, so for that to happen, I’m just blessed.”

Stroud targeted Smith-Njigba 16 times in the game, resulting in just one incompletion. He connected with Marvin Harrison Jr. for three touchdowns. The true freshman wide receiver was Stroud’s second favorite target against Utah. He finished with six catches for 71 yards and three scores, standing out among his counterparts Julian Fleming and Emeka Egbuka, who were also contributing snaps in Olave and Wilson’s absence.

The Ohio State offense struggled in its first few possessions, failing to gain a first down on either of its first two tries. However, Stroud corrected course, leading his team to points on eight of their next 11 offensive drives, including touchdowns in six of them.

Stroud had what might have been his best drive of the year in the first half. It ended with a slot fade to Harrison Jr. – the freshman’s and Ohio State’s first touchdown of the game – where Stroud put the ball directly on the left goal-line pylon. However, the throw arguably wasn’t Stroud’s most crucial play of the drive.

On one of the biggest stages in the sport, Stroud did what he seldom had done earlier in the season – run the football. Down 14-0 and facing third-and-long, Stroud stepped up in the pocket with no receivers open and made a step toward the middle of the field. He tucked the ball and ran. When he saw he would be hit short of the sticks if he powered down, he made sure he got the first down and extended the drive.

Still, Stroud’s arm is what got the Buckeyes back into the game. His vision and confidence in the pocket were on full display, especially on a few crucial fourth-down completions. Stroud’s final stats on fourth down this season: 11-of-15 for 169 yards with six touchdowns and zero interceptions – an efficiency rating of 299.97.

This season, Stroud finished with a 71.9 percent completion rate, breaking the previous record of 70.2 percent set by Justin Fields last year. He also ended with a 186.6 passer rating, surpassing Fields’ mark of 181.4 in 2019. Finally, Stroud broke the Ohio State record for passing yards per game with 369.6 in his 12 starts, topping the previous record of 345.1 from Haskins in 2018.

“It was a tough month for everybody, for the entire team, for him, for me, the whole group, but he had an edge about him,” Day said. “That’s what makes a good quarterback – when you can get through adversity and have scars on you. He made up his mind that he wasn’t going to lose that game.”

The Utes entered the game with issues in their secondary. Still, it finished the regular season with the 23rd-best pass defense and No. 10 total defense in the FBS. Utah allowed just 20.6 points to its opponents through 13 games, but Ohio State managed to score 48 points, with approximately 84 percent of its offensive yards coming through the air.

Utah head coach Kyle Whittingham acknowledged that he knew the Buckeyes planned to throw the football, and even though he knew the Ohio State offense planned to pass, his defense couldn’t make the stops necessary to win the game.

“Give credit to Ohio State,” Whittingham said after the game. “They played exceptionally well, particularly on offense. That quarterback is terrific, statistically the best in the country as far as the quarterback rating system, and he proved it tonight.”

It’s high praise from Whittingham, who has seen plenty of talented signal-callers in his 17 seasons as Utah’s head coach. But it’s not unwarranted praise for Stroud, who finished the 2021 season completing 317 of 441 passes for 4,435 yards and 44 touchdowns to only six interceptions.

Stroud will head into 2022 – having grasped Day and offensive coordinator Kevin Wilson’s scheme fully – utilizing Smith-Njigba as the lethal weapon he proved he can be against the Utes. If the Rose Bowl is any indication, the pairing could be even deadlier next season as the connection develops.