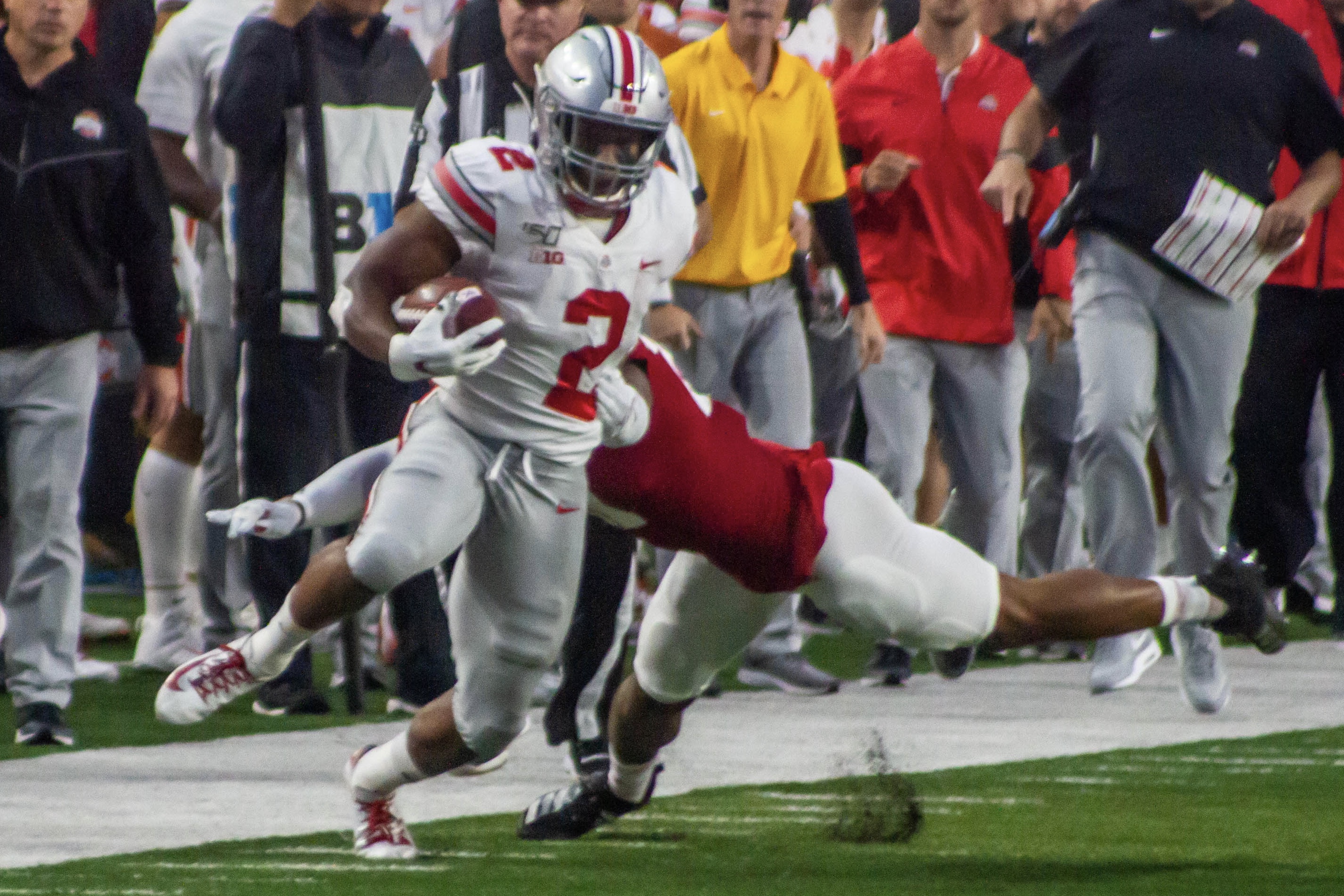 As part of our offseason coverage, Buckeye Sports Bulletin will be putting out full scouting reports for every Buckeye that could hear his name called in the 2020 NFL Draft in April. Up next is running back J.K. Dobbins.

J.K. Dobbins is a difficult guy to pin down. The Buckeye junior declared for the NFL Draft following a breakout junior season that saw him just outside of the cutoff for making a trip to New York for the Heisman ceremony.

Despite being a three-year starter, Dobbins’ rise to the upper echelon of college football’s running backs wasn’t gradual, it was a sudden jump, thanks to a change in his physical makeup between his sophomore and junior seasons.

“Seems to me like he’s very serious right now,” Ryan Day said of Dobbins in August. “I believe he lost 4 percent body fat. When you look at him, that is significant. That means he really worked hard this summer.”

The drop in body fat was designed to improve Dobbins’ explosiveness. That, paired with Ohio State’s shift to a full zone running scheme with a threat to keep at quarterback in Justin Fields, turned Dobbins into the elite halfback that will likely see himself drafted in the first three rounds in April. He may not test off the charts at the combine, as he still lacks elite speed, but his film tells the story of a much improved and a very talented back.

While a large part of his improvement is tied to his physical traits, there may not be a back in the country that increased his patience more from one year to the next than Dobbins, who at times looked like a completely different player in 2019. He was always a back that had a natural gift for finding space, but 2018 saw him in a crowd far too often. With an elite line ahead of him in 2019, Dobbins never tried to do too much.

Take this run against Indiana for example. This is an outside zone, a staple of offensive coordinator Kevin Wilson’s scheme, with a tight end sealing off the back end, while the line washes down to the play side, looking to free up a guard to get into the second level. Dobbins is expected to find that second-level block and choose a gap based on it, which means that the success of this play comes from his ability to read his own offensive line.

As he throws out a stutter step in the backfield, he’s doing just that, looking for a gap that he can hit for a big gain. The space is off the tackle’s outside hip in the “C” gap, with guard Jonah Jackson breaking through to the second level. Dobbins hits the hole after a shrug to hold Jackson’s second-level assignment outside for an extra step, and uses his downfield blocker to create a nine-yard gain.

At the point of contact, Dobbins fights through contact and falls forward, which has become an overused descriptor of young halfbacks that actually applies to the always physical Buckeye back.

This play is as emblematic of Dobbins as any from the 2019 season, and despite it not being a massive, game-breaking play, this should be the first play any team interested in Dobbins looks at. It has every one of his best qualities packed neatly into one play.

He put together a pretty similar look later in that same game, again running outside on a sweep with the backside end isolated and ignored for the sake of a numbers advantage on the play side. With a five-on-four edge, Ohio State is able to get two blockers downfield again, along with a tight end split out at wide receiver. Dobbins is asked to make a similar read, finding his second-level blockers which are, in the case, on the edge from the tight end and with Jackson, who has a linebacker dead to rights.

He hits the “B” gap, following Jackson and shows off his athletic ability by shrugging off a would-be tackler, before hitting the second level with his signature aggression. When Dobbins hits a hole, he does it violently, and while his lack of elite speed is fully on display here, he’s good for big gains consistently in open space, if not breakaway touchdowns.

That also means that occasionally, he’s going to do a Marshawn Lynch impression because of how strong he is from the ground up.

Dobbins is never going to be a track star, and he’s not going to outrun a whole lot of defensive backs at the next level. He’s a solid receiver but nothing special in that department and a perfectly fine pass blocker that isn’t going to get his quarterback killed but also isn’t going to make a ton of noticeable plays in blocking.

His biggest strengths as a prospect come from the little details that may not get fans amped up on draft day but will help him develop into a consistent starter that could push an offense from good to great at the next level. His flashes of brilliance can provide the occasional big play, but for the most part, Dobbins is a grinder that will pick up yards whenever yards are needed.

Is that worthy of a first-round pick? Probably not. Dobbins isn’t a game changing back in the way that a first-round pick usually has to be. He doesn’t possess the athletic ability that’s rare enough to merit spending the kind of capital on him that a team could spend on a position of more value. He does, however, have just about every trait needed to be a consistent 1,000-yard starting running back for any team that knows how to use him correctly.

So, who might that be? Well, Dobbins found his best self in a zone running scheme, and despite his physicality, he’s better outside of the tackles than he is between them. Luckily for Dobbins, the zone run is making a triumphant return in the NFL, which means that there’s no shortage of teams who could put him in a position to thrive. The Green Bay Packers, Minnesota Vikings, San Francisco 49ers all fit the billing with coaches off of the Shanahan-Kubiak coaching tree, which helped proliferate the scheme.

It would be fair to assume that more teams will be running it in 2020 given its success in 2019, including teams who hired more coaches off the tree like the Cleveland Browns, who added Kevin Stefanski, the OC for the zone run-heavy Vikings.

Because Dobbins would find a fit in quite a few offenses with more teams finding success running inside and outside zone, the fit may be more about opportunity than anything else. For Dobbins, the best case scenario may be to go late in the second round to a team already competing for the playoff that just needs a running back to make that last push.

If that range is where he falls, there are a few teams that would make a lot of sense on fit and need. Above all else are the Kansas City Chiefs and Houston Texans. Both teams had strong runs in 2019 but could use an extra boost to give young star quarterbacks an extra threat, and Dobbins would make a ton of sense. Kansas City may not like him enough to take him with its late first-round pick, but both teams will be on the clock in the back end of the second round.

With Kansas City knocking Houston out of the playoffs on Jan. 12, the Texans will be in position to snag the workhorse back that they need before Kansas City is able to a few picks later.

If Dobbins shines at the NFL combine, he could be in play for a non-playoff team like Arizona earlier in the second round, or even Miami a pick before the Cardinals at 39, but the expectation should probably be around the back of the 50s if Kansas City isn’t in love with him enough to spend a first-rounder on him.