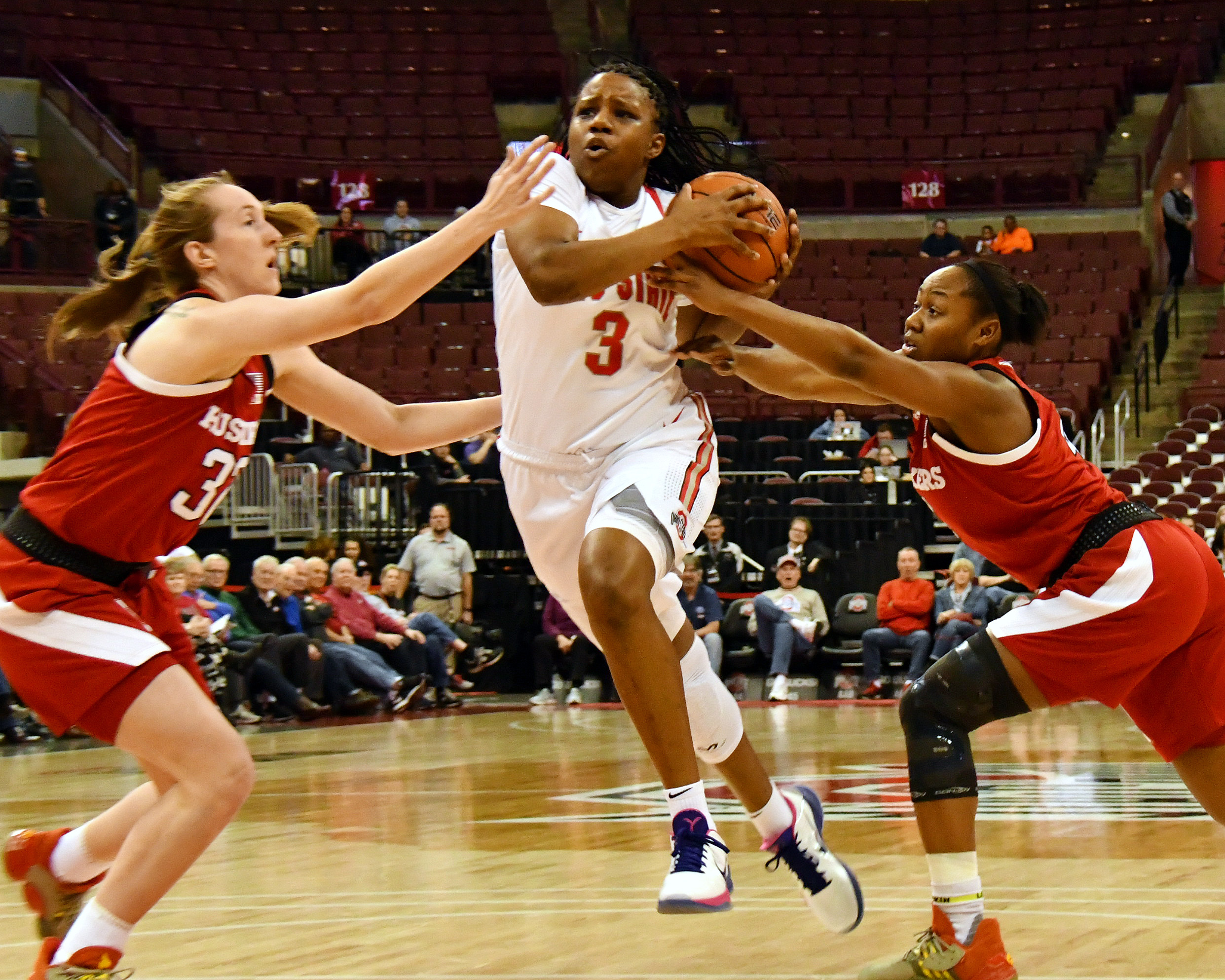 Ohio State’s defense was very successful stopping seven of the eight players that saw time on the court for Rutgers.

Those seven players scored 23 points, did not hit a single three pointer in six attempts and shot 11 of 36 (30.6 percent) from the floor.

But that eight player, junior guard Arella Guirantes, put Rutgers on her back, finishing with a career-high 36 points on 15-of-21 shooting, just enough for the Scarlet Knights to take down Ohio State 59-57.

The Buckeyes took a 50-44 lead into the fourth quarter, a lead capped off by a contested buzzer beater by junior guard Braxtin Miller. But Rutgers amped up the defense mightily in the final frame, holding Ohio State without a field goal (0 of 12) and allowing just seven makes from the free-throw line to make the comeback.

“I think we got a little worn out and we quit moving without the ball like we were the first three quarters,” McGuff said.

Guirantes, who started the game by matching Ohio State’s first quarter input by herself with 12 points in the first 10 minutes, really did not slow down from there.

In the fourth, Guirantes scored 13 of her team’s 15 points, including the game-winning shot to go up two with 4.3 seconds to play.

Though no one could reach the heights of Rutgers’ star guard, Ohio State got strong contributions from Miller, who ended the game with 16 points, including four crucial free throws to keep the Buckeyes in it.

With only four seconds left, Ohio State went to freshman guard Madison Greene, but she missed a tough layup as time expired, her seventh miss in as many attempts.

Also strong on the day was sophomore forward Dorka Juhasz, who finished with a double-double (17 points, 10 rebounds), with 15 of her points coming in the first half.

Juhasz hit on three of her four tries from deep in the opening 20 minutes, and helped Ohio State get out to a 34-30 lead at the break.

Turnovers were a big problem for Ohio State, finishing with 19 compared to only 11 from the Scarlet Knights. Rutgers turned that advantage into an 18-9 advantage on points off turnovers.

“They’re really long and athletic and really aggressive,” McGuff said. “I thought one of the keys, our turnovers late were allowing them to get transition baskets, that was a huge problem for us.”

Freshman guard Kierstan Bell missed the game for the Buckeyes due to personal reasons, according to an Ohio State spokesman.

Ohio State comes back home to take on No. 18 Northwestern at 6 p.m. Tuesday.