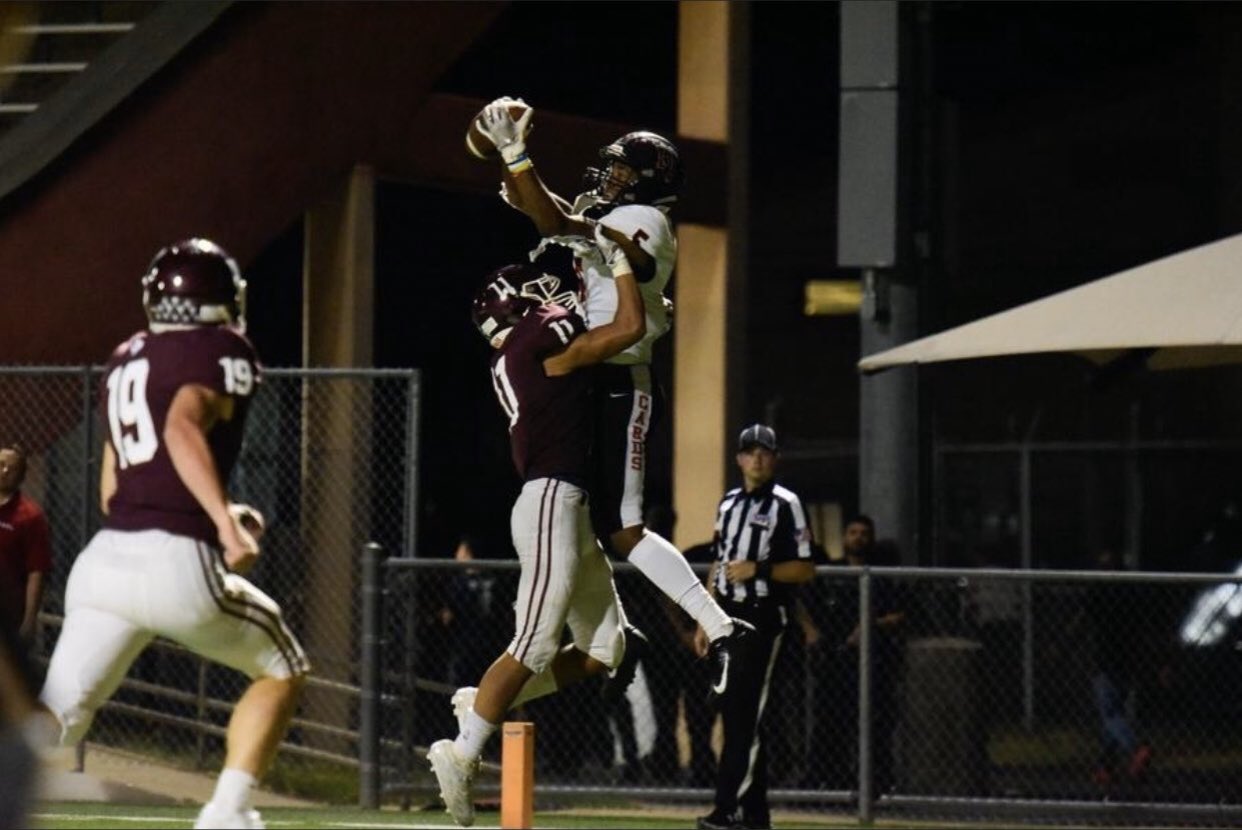 Ohio State’s wide receiver recruiting machine struck again on Monday evening, adding yet another five-star to Brian Hartline’s receiver room, which is rapidly becoming one of the most talented groups in America. This time, the pledge came from Del Valle, Texas, 2022 five-star Caleb Burton.

Burton’s pledge to Ohio State comes as no surprise, given his previous relationship with both Hartline and new Buckeye quarterback commit Quinn Ewers, who Burton has said that he wants to play with at the next level. The lack of a surprise does nothing to make this commitment any less important for the Buckeyes.

Burton is Hartline’s fourth five-star since 2019 and if Ohio State lands Emeka Egbuka as many expect, Burton would give Ohio State four straight classes with either the No. 1 or No. 2 receiver in the nation, depending on where you get your rankings from. That’s… pretty good.

Burton certainly fits the mold too, both of a Hartline receiver and of a prospect that will likely land well within the top 10 of the 247Sports player rankings by the time his high school career comes to a close. He’s a supremely talented wideout, a gifted athlete and quite a bit more refined than most receivers his age, just like essentially every Hartline receiver.

He also – like Garrett Wilson, Julian Fleming, Jaxon Smith-Njigba and Egbuka – lacks any significant weaknesses in his game, at least without getting very picky. His size (6-0, 160 pounds) isn’t yet where Ohio State will want him to be but that’s to be expected and he lacks truly elite top-end speed, but again, very picky to consider either thing a weakness, because Burton’s size and his speed isn’t a crucial part of his game.

He’s much more of a wideout centered around quickness and body control, two skills that he has operating at a college-ready level. A lot of his best plays come on looks like this, with a quick in-breaking route to create separation, a good catch in-stride and then a play in space after the catch. The lack of truly elite speed does not correlate with playmaking ability in space, as Burton shows on essentially every quick-hitter that he catches. He has great vision and almost glides when he runs.

That quickness should help him with route running too and does when he gets the chance to open his game up a little bit. He doesn’t have a massive route tree at the high school level because he really doesn’t need to have one, but he shows off fluid hips and strong stop-and-start ability out of hard cuts. He may take some time in the route running lab with Hartline to be truly Ohio State ready, but that’s not likely to be any kind of issue moving forward.

When the ball actually gets to him, he’s unstoppable. Burton has the strongest hands in the 2022 class and elite body control, both in his spatial awareness on the field and his ability to contort on the fly to high-point the ball whenever he’s defended closely on a jump-ball. Despite his lack of height, Burton is winning these kind of plays consistently and while it’s very obvious (and probably too easy) to compare him to the last two receivers that Ohio State pulled out of Texas, the shades of Wilson and Smith-Njigba are very difficult to ignore, both in running style (specifically Wilson) and body control (specifically Smith-Njigba).

At the risk of being reductionist, that skill set is a winning combination with Hartline. He’s had a lot of success with refined receivers coming from strong high school passing attacks before and will almost certainly have success with Burton once he arrives on campus. There may not be a coach in Ohio State’s program – save perhaps for Larry Johnson and Ryan Day – that better understands the kind of recruits he works best with. In Hartline’s case, those guys just happen to be the best receivers in every single recruiting class.