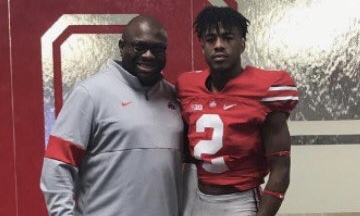 It’s been a flurry of commitments for Ohio State in the past three days, and no coach is happier – save for perhaps Ryan Day – than new defensive coordinator Kerry Coombs. Coombs, who was hired officially in January, needed just two months to reestablish himself as one of the best recruiters in the country.

In traditional Coombs fashion, he’s celebrating with hashtags that truly stretch Twitter’s intended use of the hashtag tool.

Turrentine’s pledge gives Ohio State 14 members in its 2021 class, four of which are going to suit up in the defensive backfield: Jakailin Johnson and Smith at cornerback, Jaylen Johnson at either safety or bullet, and Turrentine, who could play just about anywhere in the secondary. Rated as the No. 136 player in the country, he’s considered a cornerback on his recruiting profile, but ranked as a safety.

At 6-0, 175 pounds, he’s not yet college ready physically by any means, but he has the frame to grow into to be a safety at the next level, and despite splitting time at the positions in high school, Ohio State will likely look to move him into a single-high safety role at the next level, while Jaylen Johnson will be more of a box safety.

If Turrentine does end up at safety as expected, it may require a bit of a role change for that traditional one-high safety, because while he’s tremendously talented, he isn’t going to be physically imposing like Josh Proctor, nor does he have the athletic ability to play center field like Malik Hooker did. Instead, he relies pretty heavily on his football IQ, which is off the charts. He reads plays and the quarterbacks eyes at a level much higher than is usually expected from incoming safety recruits, and uses that to do just about everything else in his game.

Take his zone coverage, for example. As a high-safety in a cover 3, he would be expected to cover the deep middle third, and while he isn’t particularly fast (he’s not slow either, just not a burner), he has the instincts and intelligence to put himself in the right position to make a play. Some safeties rely on intelligence to do that, but Turrentine has learned to operate without elite speed or range.

Now, that does mean that his man coverage is likely only ever going to be average at best, but that shouldn’t be a huge issue at Ohio State. The Buckeyes play zone with their high-safety, and Turrentine is never going to struggle in zone.

He’s also not going to struggle in run support. He doesn’t have the size to be an enforcer on halfbacks or receivers that come across the middle, but again, his ability to see the play as it unfolds and get into the right position is something that he utilizes perfectly against the run. He takes good angles, attacks the ball carrier rather than waiting on him, and wraps up very well through the tackle. He won’t be asked to do a ton of run support at Ohio State, but having that on the back end of the defense is very helpful for a coordinator, and will allow the Buckeyes to drop seven defenders into coverage a lot more frequently.

Turrentine, like Jaylen Johnson, looks a lot like a future starter and defensive anchor in Columbus. He doesn’t have the athletic ability needed to be considered a “high ceiling” prospect, but his floor is power five starter, and if he can just continue to improve his technique, he can grow into a very good power five starter. His ceiling looks a lot like Jordan Fuller’s senior year at Ohio State: consistent and reliable in the back of a hyper-talented defense that needs consistent and reliable.