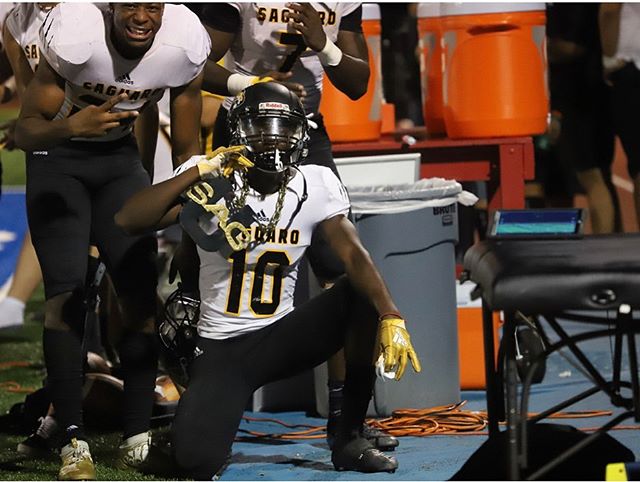 Kerry Coombs made his name at Ohio State developing high potential athletes into top defensive backs, and while he’s yet to have the chance to prove that he still has the magic touch on the field, he hasn’t lost a step in identifying and landing those players on the recruiting trail. Look no further than Ohio State’s 2021 defensive back recruiting class, now sitting at six (or five, depending on how you view Jaylen Johnson) members, all of which fit the Coombs mold to a T. Cornerbacks Jakailin Johnson and Devonta Smith are lengthy, talented athletes with room to grow technically, as is safety Andre Turrentine, athlete Jantzen Dunn and the aforementioned Jaylen Johnson.

Coombs’ latest commitment, Arizona athlete Denzel Burke, fits into that crowd perfectly. Just as his five classmates are, Burke is at least six feet tall (6-0), and will come to Ohio State as a tremendous athlete that can learn the minutiae of the game from Coombs. There’s a bit more to question about his testing than there is about some of the other defensive backs in the class because he ran a 4.72 40-time at The Opening Regional, but he did so more than a year ago, and 247Sports West Coast analyst Blair Angulo has indicated that the track he ran it on was covered in rain.

Still, if there are questions about the testing numbers, they disappear on tape, because Burke plays much faster than a 4.73 time would indicate. He splits time between wide receiver and defensive back for his high school, and on the offensive side of the field, his highlights are loaded with catch-and-run touchdowns that would make Parris Campbell blush.

Put simply, the kid can run. He’s not likely to be a 4.3 guy, but he’s certainly hovering around the 4.5 range, which is perfectly fine for an Ohio State corner, especially because he projects as a No. 2 cornerback with a longer player like Johnson or Dunn opposite of him, similar to the role that Damon Arnette and Gareon Conley played in recent seasons.

Athletically, the projection for Burke is pretty easy. In Ohio State’s weight program, he’ll likely move near that 200-pound range that the Buckeyes like their corners in, filling out his frame to help him survive against some of the Big Ten’s more physical receivers and to allow him to contribute to stopping the run.

As a defensive back? The projection becomes a bit murkier. Burke’s defensive back film is, without exaggeration, 49 seconds long. Ohio State has more tape on him than that, obviously, but this is a guy that’s still getting used to the position. On top of that, he missed five games in 2019, and was playing behind five-star 2020 Georgia signee Kelee Ringo, four-star 2020 Washington signee Jacobe Covington, and 2020 four-star Army signee Cameron Nash. Playing around that kind of talent is going to be a good thing in the long run for Burke, but it does make defining him as a player a little tougher, because he’s yet to truly show what he can do.

The flashes of what could be are excellent.

Burke shows off a propensity for tackling here, and does so with solid form, even as he nearly overpursues out of the play. He shows off great lateral movement to get himself back into the play, drives through the point of contact with the ball carrier and wraps up through the tackle. His tackling isn’t perfect, but he doesn’t seem to have developed any bad habits, which will make developing him much easier for Ohio State, at least in run support.

Of his pass coverage reps, the theme of “talented, with a ton of potential but not a ton of proven experience” really starts to stand out. He shows off very strong closing speed and the athletic ability to stick to a receiver’s hip in man coverage, especially on this play, when he runs a comeback route for the receiver, never giving up more than a yard of separation and hitting the cut without any trouble. All of that is great to see.

What isn’t great to see, however, is essentially no hand usage on the line of scrimmage throughout the entirety of his defensive tape, and zero zone coverage reps. He has the physicality to excel at the former, and the athleticism to play in essentially any system, but he’s probably going to have to pick up both of those skills at college. Saguaro, his high school, is working primarily out of man coverage, and while he’ll play more zone in 2020 than he did in 2019, it’s still going to be a focal point for Ohio State.

Because of that, Burke isn’t a first-year contributor kind of player, which Ohio State is likely banking on. He can cut his teeth on the special teams and potentially take a redshirt during his freshman year while he picks up some of the techniques that he’ll need before he’s ready to step into a starting spot. he could find himself in a Sevyn Banks or Cameron Brown type of role as a sophomore, contributing but caught behind more experienced players, before moving into a starting role in his third year at Ohio State. With the athleticism that Burke has and with Coombs leading his development, by the time he enters year three, the Arizona native should look quite a bit like a Coombs product of old. In other words: a first round pick.