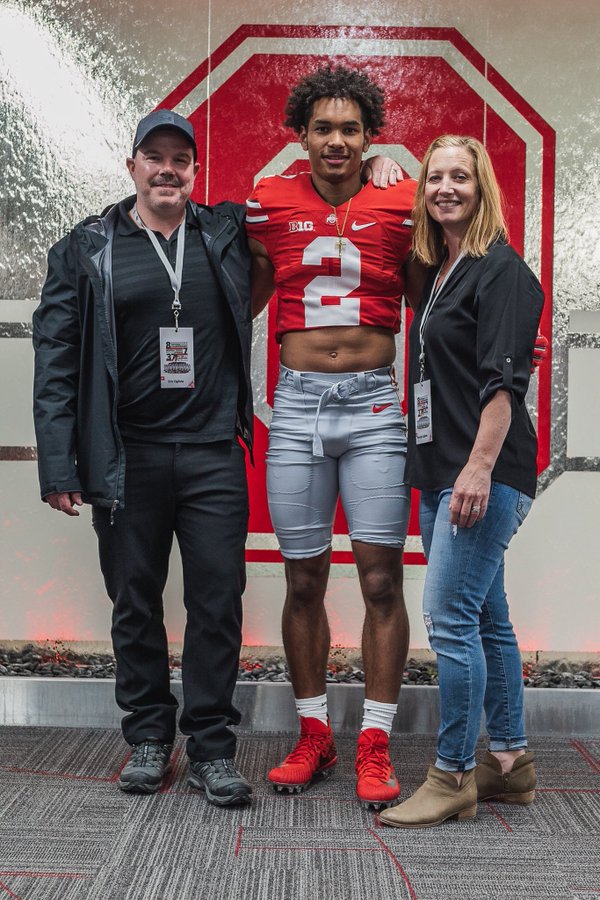 Ohio State secured a commitment from Steilacoom, Wa., five-star wide receiver Emeka Egbuka late Friday night, all but securing what will be at least four consecutive classes with the No. 1 or No. 2 wide receiver in the nation heading to Ohio State (Garrett Wilson was No. 2 in 2019, Julian Fleming and Egbuka are No. 1 in 2020 and 2021, Caleb Burton is No. 2 in 2022).

The Buckeyes, which were never known for an elite passing attack until Ryan Day’s arrival on the scene in 2017, are now recruiting wide receivers and quarterbacks at an almost unprecedented level. Egbuka seems to fit perfectly into those plans, yet another in an increasingly long line of wide receivers that perfectly match what could be described as the “Brian Hartline model.” Essentially, if there’s a top receiver that’s technically sound beyond his age, elite in both athletic ability and body control, and has spent his high school career putting up ungodly numbers, he’s likely already committed to play for Hartline.

Egbuka, of course, has each of those traits. He’s dominated Washington high school football since his arrival as a freshman and does so with all of the features that Hartline seems to seek out, while also fitting into the body type that Ohio State has become very familiar with at wide receiver – not huge (Egbuka is 6-1, 190 pounds), but big enough to win battles, and confident enough to play like he’s the biggest player on the field.

That was Wilson’s greatest strength and featured heavily in Fleming and Burton as well. Egbuka, in all honest, might play bigger than all of them. His releases aren’t frequently contested, but once he does find contact down the field on a play like this one, he’s happy to bully defenders off the ball to create enough room for himself.

Because he has elite body control and great hands, Egbuka needs very little room to actually maneuver, so those physical battles to fight for space are really just showing off, because he’d be able to make these catches with defenders draped all over him.

His physicality and body control are the first traits that stand out when watching Egbuka, but his route running ability is certainly worth a mention, as is his speed. He’s not likely to be the fastest receiver in his class – but he’s pretty close to it – and while he doesn’t have an especially extensive route tree at this point, the route running ability that he does show off is almost always excellent.

Here, he flashes some quick cut explosiveness on a curl route, not quite stopping on a dime but starting and stopping quickly enough that the cornerback is essentially thrown out of the play, before starting up again to get to the ball, thrown too far to the outside. There aren’t a whole lot of receivers in America that can go in this many directions in that short a period of time, all before finishing the play with an acrobatic catch on the sidelines.

Same idea here, this time on a much deeper route, which is better suited for Egbuka’s skill set. That ability to dart in and out of cuts while losing almost none of his momentum is going to make Egbuka a lot of money some day, and it’s going to provide Day with an absolutely terrifying outside option on those long-developing deep shots that he likes so much, because there isn’t a corner in the country that’s keeping up with this route consistently.

Like with the other Hartline targets, there’s really not a significant weakness here. A case could be made that Egbuka isn’t playing against top tier competition, which means that he’s not seeing a ton of capable press coverage, but that’s a relatively small concern with someone this good. At the core here, Ohio State is getting another receiver that looks a whole lot like the five-stars already on the roster. If it isn’t broken – and it certainly isn’t right now for the Buckeyes – don’t fix it.