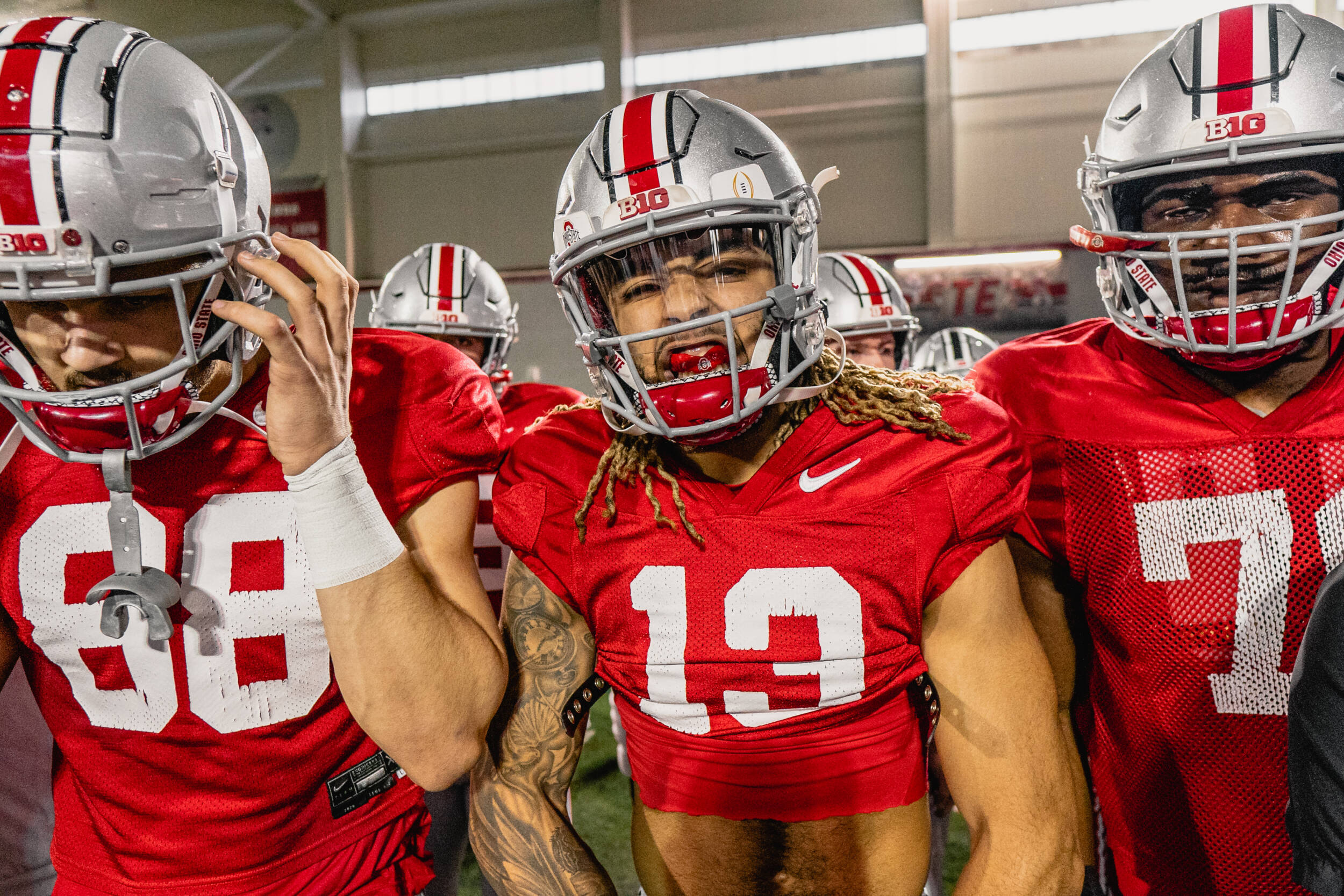 For an aspiring college football standout, most gridiron advice dispensed by a 10-year NFL veteran and multi-time All-Pro performer should not go unheeded.

That goes double for Ohio State sophomore Gee Scott Jr., given that he counts San Francisco 49ers cornerback Richard Sherman as a longtime mentor who holds his best interests at heart.

When Sherman suggested to Gee Scott Sr. that his son should consider a move from wide receiver to tight end ahead of his second season in the Buckeye program, Scott Jr. quickly began setting the wheels in motion.

“When you think tight end, you think of somebody that’s a 6-6, 260-pound slower guy that blocks. And that kind of has been the history of the game and that’s the way it’s been going,” Scott said. “But if you look in the future of where the tight end position could potentially go, you can see it being more of an elite, faster, someone that’s physical. Kind of like a receiver that almost transitions into a tight end. So you can see that being the future of the game, so I just hopped on the trend early.”

Scott is already rewriting the conventions of the position at Ohio State by joining the room at just 6-foot-3, 225 pounds –– numbers that make him shorter and lighter than nearly every scholarship tight end on the Buckeyes’ roster.

As a true freshman wide receiver in 2020 though, the No. 66 overall prospect in the country was already the biggest player in the position room, and working hard not to add to that disparity.

“I’m a 6-3 receiver that struggles to stay under a certain amount of weight –– 215 pounds was just like a regular thing for me –– and it was like I was constantly trying to stay as light as I can to keep up the speed of staying a receiver,” Scott said.

But Sherman, a former Seattle Seahawk, proposed an idea to the Sammamish, Washington, native that would theoretically unleash Scott’s full potential.

One of several highly-touted true freshmen wideouts that entered the program in 2020, Scott played just 14 snaps during his first year and failed to tally a reception. With Chris Olave returning for a senior season and more five-star wide receiver talent on its way in 2021, Scott brought the idea to the Ohio State coaching staff early in the offseason.

Scott said the Buckeye coaches didn’t take the idea seriously at first, but by the time he began practicing with Kevin Wilson’s unit at the start of spring, head coach Ryan Day was singing Scott’s praises due to his forward thinking.

“He’s got the right idea on this thing,” Day said in April. “He has the right frame, he’s very, very athletic.”

The aforementioned Pitts raked in 770 yards and 12 touchdowns in just eight games for the Gators last season, winning the John Mackey Award before being selected No. 4 overall in the 2021 NFL Draft –– the highest pick ever used to take a tight end.

The impact Pitts made on the wider football landscape was not lost on Scott.

“That’s a part of history, and it’s someone that came from a receiver background that came into the tight end position,” Scott said. “When it goes down in history, I think he’s gonna be one of the first guys that really kind of elevate that position and change it a little bit. I think my goal is to come right behind him and make it even more definite on where this tight end position’s going.”

Unfortunately for Scott, he isn’t at a program where 42 catches typically come the way of any tight end over the course of two full seasons, let alone an eight-game stretch, as in the case of Pitts.

Senior tight end Jeremy Ruckert, who has led the Buckeye tight ends in receptions the past two seasons, had just 27 combined in 2019 and ‘20.

Scott isn’t making any assumptions about what his stats might look like at tight end though, and he’s willing to do the dirty work to get on the field one way or another.

“It’s more of a big picture scheme,” Scott said. “I think that’s the problem with a lot of things in life. I think everybody wants something right now, and that’s not the reality of it and that’s not the way I expect it to go. I’m not expecting to be an overnight sensation, I’m here to put the dirty hard work in, chop wood and carry water and I’m here to just live another day and keep going.”

At Ohio State, blocking is chief among the responsibilities of any tight end, even one with the pass-catching acumen of Ruckert, who was also a high school wide receiver.

Blocking for the run game is new for Scott, who said he focused on perimeter blocking in high school, but he’s already taken a liking to the more physical side of the tight end position.

“I kind of thought it was gonna be harder and more fierce than it is,” Scott said. “I threw myself in there as soon as I could, and my first time going in there to block somebody I was like, ‘Wow, I love this, I want to put my face on somebody else.’ It was just something I enjoyed doing, and I’m happy about the transition and I’m excited to see where it goes.”

Despite weighing in anywhere from 20 to 30 pounds less than tight ends like Ruckert and redshirt sophomore Cade Stover, Scott’s weight room numbers suggest he’ll be able to handle himself just fine in the blocking department, given the technique follows.

“Gee right now is a little light, pushing upper 220s, pushing 230, but he plays strong,” Wilson said. “If we put a bench out here and started benching, he’ll be maybe the strongest tight end we got as far as bench.”

Wilson said he thought Scott’s body type suggested he might have a chance to transition to tight end during his recruiting process, but that he’d have to prove he was “tough enough” to play the position. As it turns out, Wilson said Scott has shown to be “plenty tough enough” thus far.

With Ruckert likely to see the vast majority of targets in the passing game from the tight end position this season, it may be another full year of development for Scott before some of his aspirations come to fruition.

The future could be bright though, and Scott is willing to wait if it means he gets the chance to prove that down the line.

“I saw an opportunity for myself and somewhere I can grow, and I think my ceiling as a tight end is a lot higher than my ceiling as a receiver,” Scott said. “And so, I think if I continue this path, there’s good things in store.”