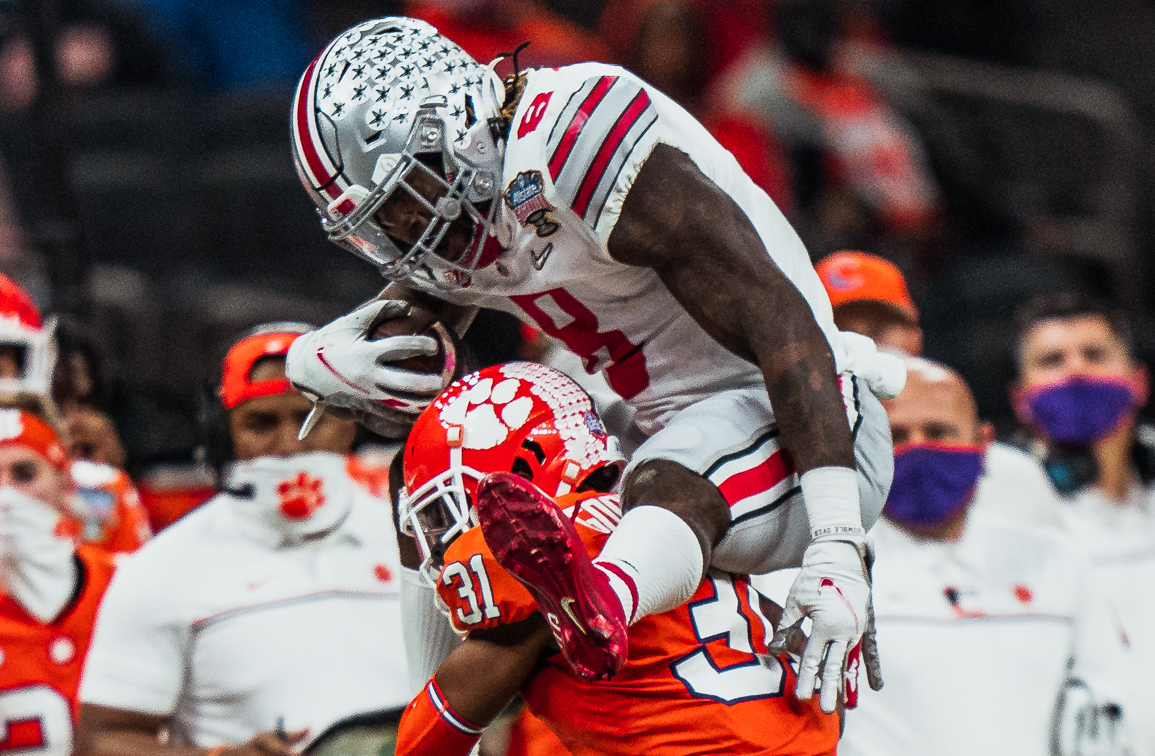 Former Ohio State running back Ezekiel Elliott had an incredible three-game run to lead the Buckeyes to the 2015 College Football Playoff National Championship, rushing for 696 yards and eight touchdowns in wins over Wisconsin, Alabama and Oregon.

Senior running back Trey Sermon has had a similar tear this postseason, rushing for a school single-game record 331 yards and two touchdowns in the Big Ten Championship Game against Northwestern and 193 yards and one score in the Sugar Bowl against Clemson. But if the Buckeyes are going to beat Alabama on Monday night to capture their second national title of the playoff era, they’ll need Sermon to continue doing his best impression of Elliott.

“I definitely remember watching it,” Sermon said of Elliott’s three-game run during a teleconference on Monday afternoon. “It’s just a great feeling. There’s been a lot of great running backs that have come through here, and Zeke is one of the best running backs. Just to be in that conversation, it’s an honor. Those guys are great, and I just feel pretty good about what I’ve been able to accomplish so far.”

Sermon, who is now up to 524 yards and three touchdowns, is actually averaging 30 more yards per game than Elliott did that postseason (262 to 232).

“He’s playing outstanding football right now. There’s no doubt about that,” Alabama head coach Nick Saban said. “He had a fantastic game against Clemson. I think they have two really good running backs (in Sermon and sophomore Master Teague). Both are very capable. Their offensive line does a very good job blocking the looks up front, getting a hat on a hat, and the runners are very talented.”

Sermon took a much different path than Elliott to get to this point, though. He amassed more than 2,000 rushing yards and 25 touchdowns in three season at Oklahoma but suffered a knee injury in November 2019 that – coupled with the emergency of fellow running backs Kennedy Brooks and Rhamondre Stevenson – knocked him down the Sooners’ depth chart.

Sermon, who graduated last spring, entered the transfer portal in hopes of finding a new home. And Ohio State, following an injury in spring practice to presumed starter Master Teague, came calling. He and running backs coach Tony Alford had a strong relationship from when the Buckeyes recruited Sermon out of Marietta (Ga.) Sprayberry during the 2017 cycle, and that made his decision easy.

“I just wanted a better opportunity for myself, and I felt like it was just a good fit for me to come here,” Sermon said.

Unbeknownst to Sermon upon his announcement, the coronavirus pandemic would severely impact his time at Ohio State. The football facilities were shut down for an extended period of time and he didn’t have a normal offseason to hang or workout with his teammates. Not to mention, the Big Ten postponed before eventually reinstating the season, which kicked off on Oct. 24 with limited preseason practices.

“It was pretty rough in the beginning, just coming here and not being able to be around everybody, and then everything gets shut down and then picks back up. It was pretty rough,” Sermon said. “The guys, they welcomed me in from day one. Over time, of course, I’ve gotten more comfortable with those guys and now they’re my brothers.”

The lack of preseason reps, plus the lingering injury concerns, contributed to a slow start this fall. Through Ohio State’s first five games, he carried the ball 55 times for 344 yards and one touchdown as he split carries with Teague.

“I think there were a couple things at play,” Ohio State head coach Ryan Day said. “One, he didn’t have the lead-up like a normal running back would have going into the season because of the lack of the preseason. Came in during the summer, didn’t have that lead-up like he typically would, and then he was coming off of the injury. And then also our run game is a little different than what he was used to be. He was also splitting time with Master, so when he started to get more at bats, he started to get more runs, got into a rhythm of the game.”

That lone score came on a 64-yarder in the 52-12 victory at Michigan State on Dec. 5, giving the Buckeyes a glimpse of what could be.

“I just wanted to be able to contribute more and just make the most of my opportunities,” Sermon said. “I feel like before, I just wasn’t playing my best. It just kind of started in practice. I just started practicing a lot harder than I was, just trying to just do whatever I can to just help myself improve.”

With the Buckeyes now on the precipice of another national title, Sermon has a chance to cement his status in Ohio State lore, just like he saw Elliott do six years ago.

“When I came here, my goal was to do whatever I can to help this team out and play for a national championship,” Sermon said. “It’s all happened, and it does kind of seem like a dream. It’s just very exciting, just to know that we’ve come this far as a team. We’ve executed and we believe in each other. Just having this opportunity, it’s amazing. We’re all excited.”