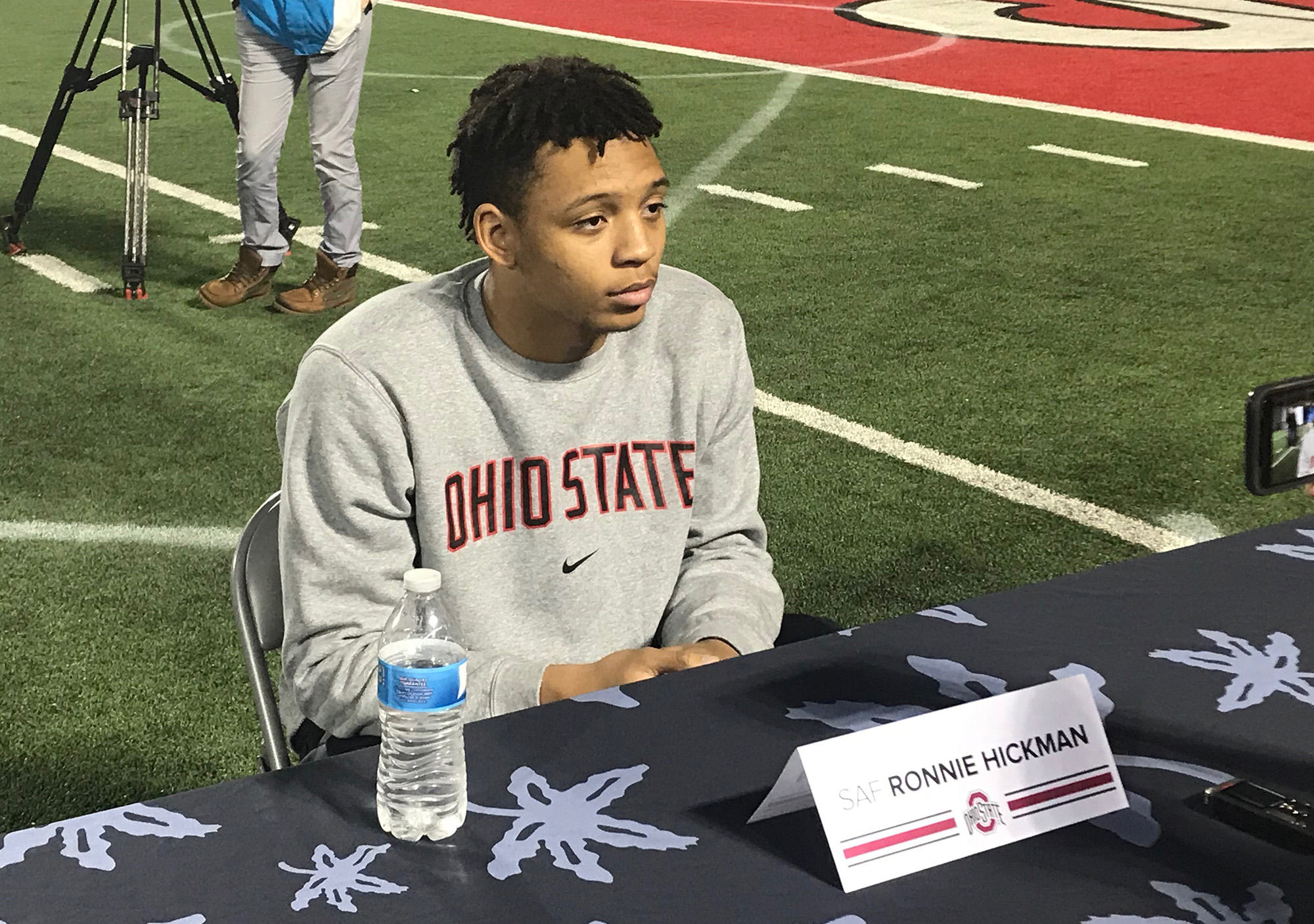 Ohio State freshman safety Ronnie Hickman enrolled early in Columbus despite the fact that he is still recovering from an anterior cruciate ligament injury that cut his senior season short.

Wayne (N.J.) DePaul Catholic won the New Jersey Non Public Group III state title to conclude Hickman’s junior season, but did not enjoy the same success after the two-way standout went down as a senior.

Despite starting on offense and defense for the football team and excelling for the lacrosse team, Hickman is not used to being surrounded by media members — coming from a school of 605 students.

On National Signing Day, Ohio State’s early enrollees were made available to the media for the first time as Buckeyes. The freshmen all had individual tables with their names on them to sit down and await questions.

“This is cool,” Hickman said. “I’ve never seen this many people trying to interview me before.”

While the difference between a school of 600 students and 60,000 students might seem daunting, Hickman has taken the transition in stride.

“It’s a little different,” Hickman said. “I like the academic advisors, they really help you. And you’re here with your brothers and your teammates, you guys are going through everything together, so it helps to have your brother there to go through it with you.”

The Wayne, N.J., native already bought into the “brotherhood mentality” that holds strong throughout the Buckeye locker room, and doesn’t see any kind of culture shock as being a roadblock for him.

“It’s a little bit colder up here,” Hickman said of the difference between Jersey and Ohio. “This weather’s cold. But as far as football-wise, it’s a different speed. The intensity has definitely picked up. But I’ve been playing football all my life, so this is stuff that I’m used to and that I signed up for.”

Hickman, who originally committed on April 13, 2018, may have signed up for Ohio State football, but the coaching staff looked quite different when he made his decision. Urban Meyer is no longer the head coach, and co-defensive coordinators Greg Schiano and Alex Grinch, who was also the safeties coach, have moved on.

It is not easy to retain recruits after such extreme coaching turnover, especially when the prospect’s position coaches are no longer in the program. Hickman showed maturity beyond his years in his reaction to Meyer stepping down, Schiano going to the Patriots and Grinch heading over to Oklahoma.

“Honestly I’m not going to sugarcoat anything, I had to take a step back and just kind of think,” Hickman said. “But I know it’s a business, and once I understood that, I realized that those coaches made the best decision for them and their families. So I kind of respected that, and once I got the call who the new coaches were and I spoke to them, it’s been good so far.

“Coach Day and the other coaching staff up here, they continued to make me feel like I was wanted. And then once Coach Hafley signed, he spoke to me as soon as he got signed, and that really touched home for me. And ever since, I feel like we’ve had a good connection”

The Wayne (N.J.) DePaul Catholic product expressed his excitement to play for Hafley, who is a co-defensive coordinator and secondary coach for Ohio State. Hickman’s high school coaches had relationships with Hafley, who spent the past seven years coaching in the NFL after 11 years among the collegiate ranks, but the young defensive back did not know him.

“When I spoke to him, he was real honest with me, he was real straight-up with me,” Hickman said of Hafley, who is also from New Jersey. “I asked people about him, and they all said the same good things about him. I was willing to work with him and give him my all, and he said he was going to give me his all, so I respected that. And that was about it.”

Hickman credits senior safety Jordan Fuller for being instrumental in his recruitment, taking him under his wing and showing the freshman the ropes. Fuller could have entered April’s NFL Draft, but the safety decided to return for one final season. Hickman hopes to face the same dilemma some day.

“Honestly, I think the tradition this place has,” Hickman said when asked why he chose to come to Columbus. “And the numbers don’t lie. They put up big numbers, especially when it comes up to putting guys in the league.

“That’s my dream, that’s everyone else’s dream here. So I think you can’t go wrong with this place. And they’re not just a football program. They’re dominating in the world outside of football, and I think that I can succeed if football doesn’t work, I can succeed off the field just as well.”

Hickman, who was the No. 115 overall player in the 2019 class, works diligently to recover from injury and remains eager to take the field. He hopes to be ready for spring practices, but will make sure he is at 100 percent before returning.

“It’s hard,” Hickman said. “For every football player, they want to be out there, especially when they’re watching their teammates get after it. But I’m dealing with this injury, so it’s fueling my engine for me to get back.”

Fortunately for Hickman, he has shown the resiliency to bounce back after falling down ever since he was a small child. ‘The Rocket,’ as he is affectionately called, always gets back up for takeoff.

“Honestly, a lot of people think it’s from my speed, but I got the nickname before I could even run,” Hickman said. “Because I was a baby and before I could walk and stuff, I would try to take off like a rocket, but I would fall back down, but I would keep going. So my dad just called me ‘Rocket,’ and it stuck with me.”

‘Rocket’ said he’s been excited for the opportunity to play D-I football his entire life, adding that he’s been a fan of the Buckeyes ever since he can remember. Hickman added that Ohio State fans are one of the most important parts of Buckeye victories, and cannot wait to give them more reason to cheer.